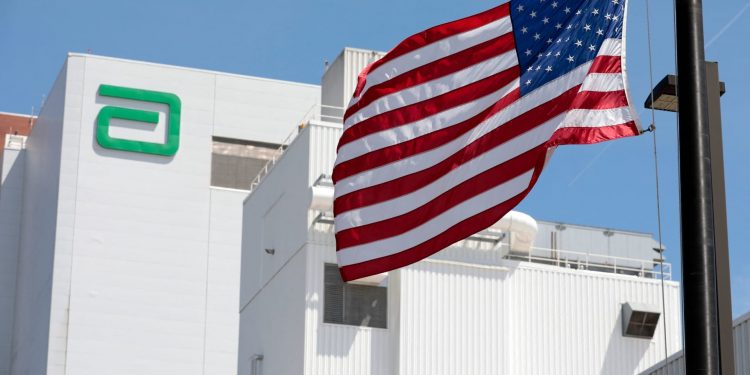 The Abbott manufacturing facility in Sturgis, Michigan, on May 13, 2022.

President Joe Biden on Wednesday invoked the Defense Production Act to increase baby formula manufacturing to ease a nationwide shortage caused by the closure of a key plant in Michigan.

Biden is requiring suppliers to direct ingredients to baby formula manufacturers before any other companies who may have placed orders for those same goods. It wasn’t immediately clear which major suppliers are subject to the order.

The Defense Production Act gives the president broad authority to require companies to prioritize the manufacture and allocation of goods in response to a crisis. The law was passed in 1950 during the Korean War.

Biden has also directed the Health and Human Services Department and Department of Agriculture to use aircraft from the Defense Department to pick up infant formula from overseas that meets U.S. health and safety standards.

Parents across the nation have struggled to find formula for their infants since Abbott Nutrition shuttered its plant in Sturgis, Michigan due to bacterial contamination. Abbott issued a recall in February of powdered formula brands made at the plant after four infants who consumed products made there fell ill with bacterial infections, two of whom died.

The Justice Department, in a complaint filed Monday, said Abbott had introduced adulterated baby formula into the consumer market. Abbott maintains that there’s “no conclusive evidence” that its formula caused the infants to fall ill and die.

Abbott reached an agreement with the Food and Drug Administration on Monday to reopen the plant under conditions subject to enforcement by a federal court. Those conditions include hiring independent experts to ensure that the plant meets U.S. food safety standards.

Abbott said it would take about two weeks to reopen the Michigan facility, subject to FDA approval, and up to eight weeks for products to arrive in stores across the country.

The FDA is increasing baby formula imports from other countries to help ease the shortage. To sell formula in the U.S., companies have to submit an application to the FDA, which the agency will review to make sure the products are safe and provide adequate nutrition.

However, Democratic lawmakers said this week that the FDA does not have nearly enough inspectors to ensure imported formula is safe. Rep. Rosa DeLauro, chair of the House Appropriations Committee, said the FDA told her it has only nine inspectors to keep an eye on infant formula manufacturers.

DeLauro introduced legislation this week that would provide the FDA with $28 million in emergency funding to beef up inspections, monitor the supply chain and root out fraud.