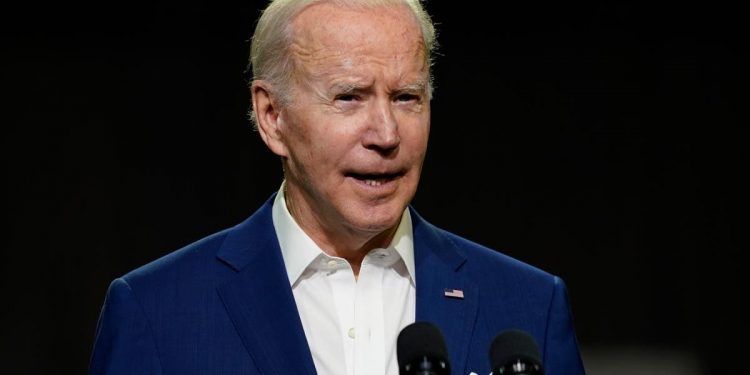 
US will provide Ukraine with “new capabilities”, including artillery systems and rounds, armoured personnel carriers, and helicopters as part of a $800m defence assistance package meant to help Ukraine fend off intensified Russian attacks in the Donbas region, president Joe Biden has said.

In a statement, Mr Biden said he informed Ukrainian President Volodymyr Zelensky of the forthcoming arms shipments during a Wednesday videoconference between the two leaders.

Mr Biden said: “The Ukrainian military has used the weapons we are providing to devastating effect. As Russia prepares to intensify its attack in the Donbas region, the United States will continue to provide Ukraine with the capabilities to defend itself,” Mr Biden said.

Meanwhile, Mr Biden has described the actions of Vladimir Putin’s army in Ukraine as “genocide” for the first time. In remarks in Iowa concerning gas prices, the president said: “Your family budget, your ability to fill up your tank — none of it should hinge on whether a dictator declares war and commits genocide a half a world away.”

More than 50 House Republicans are pressing the Customs and Border Protection over the possibility that it might use Veterans Affairs medical personnel at the border.

In a letter addressed to Homeland security secretary Alejandro Mayorkas, Republicans said that any consideration of moving VA medical personnel to the border would be “deeply troubling.”

“On March 29, 2022, a CBP report indicated a surge of border crossings was imminent due to the rescinding of this authority. The report presents a dire situation that may result in as many as 18,000 possible encounters per day. If this number proves accurate, this could result in over 540,000 encounters in a single month,” the GOP letter, led by Rep. Jody Hice said.

“Currently, CBP does not have the facilities or manpower to handle the anticipated massive surge.”

On Wednesday, the report however said that the US administration has made no final decision yet about who to send to Kyiv.

But it suggested that it could be President Joe Biden himself, vice president Kamala Harris, secretary of state Antony Blinken or defence secretary Lloyd Austin.

Joe Biden has said that Russia’s war in Ukraine amounts to “genocide” as he accused Vladimir Putin of trying to “wipe out the idea of even being a Ukrainian”.

The US president added that “more evidence” is coming out about all the “horrible things” Russian forces are doing across the nation.

He said: “I called it genocide because it has become clearer and clearer that Putin is just trying to wipe out the idea of being able to be Ukrainian. We’re only going to learn more and more about the devastation.”

President Joe Biden informed Ukraine’s Volodymyr Zelensky that the US will provide Ukrainian defence forces with “new capabilities” including artillery systems and rounds, armoured personnel carriers, and helicopters as part of an $800m defence assistance package meant to help Kyiv.

“This new package of assistance will contain many of the highly effective weapons systems we have already provided and new capabilities tailored to the wider assault we expect Russia to launch in eastern Ukraine,” the president said.