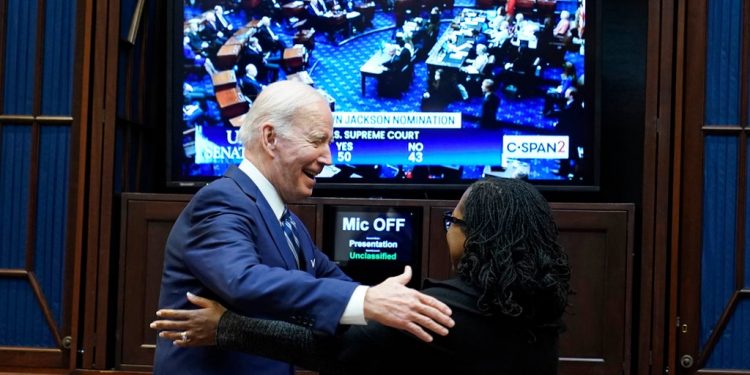 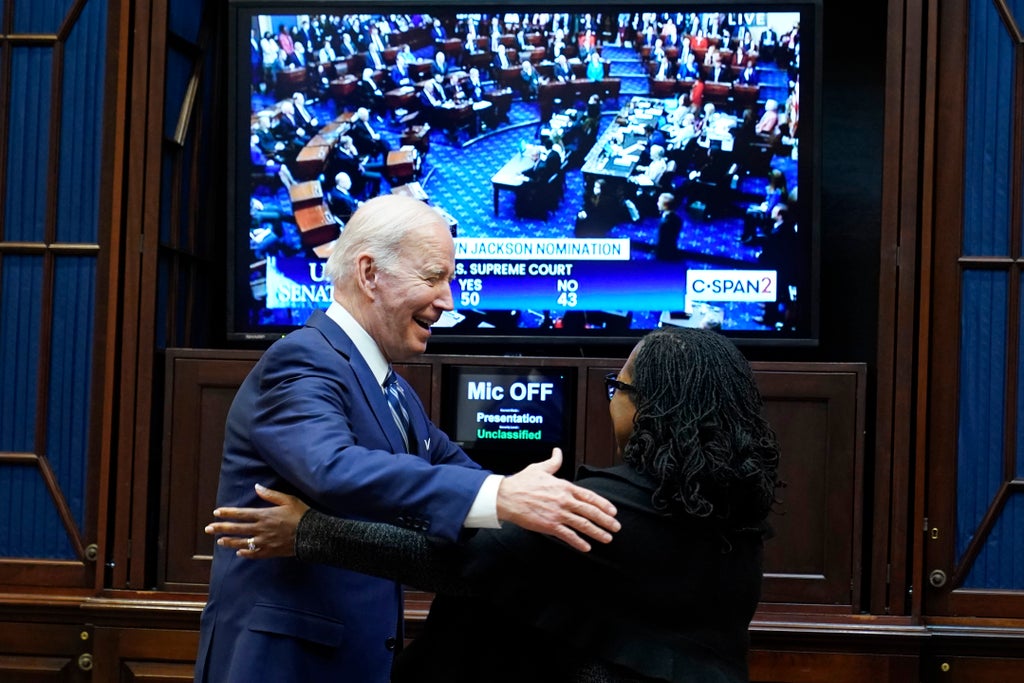 President Joe Biden’s first Supreme Court nominee, Ketanji Brown Jackson, has been confirmed by a vote on the Senate floor. Having garnered the support of three Republican senators – Susan Collins, Lisa Murkowski, and Mitt Romney – she also received the support of all 50 Democrats, becoming the court’s first Black woman justice.

The vote comes after a seven-week nomination process that saw her heavily criticised by Republicans who focused on her supposed record of leniency towards sexual offenders who targeted children. That criticism was in turn widely rejected as a distortion of her past decisions.

Earlier, House Speaker Nancy Pelosi has announced she has tested positive for Covid-19, this just having appeared next to President Biden, Chuck Schumer, and other senior figures at a bill signing.

Ms Pelosi’s diagnosis means that three of the top 10 people in the presidential line of succession are currently known to be infected with the virus. The speaker’s team say she is currently asymptomatic.

The White House has dismissed concerns over Joe Biden being at the risk of contracting Covid after he met with speaker Nancy Pelosi, who tested positive earlier in the day on Thursday.

“The way a close contact is defined, it’s not arbitrary, it’s not something made up by the White House, it’s CDC guidelines, and how they define it is being within six feet for a cumulative total of 15 minutes over a 24-hour period,” White House press secretary Jen Psaki said.

“They were not. All of their interactions were publicly available, I think you saw them, and that’s how that assessment is made,” Ms Psaki added.

The two were at the White House, at times in very close proximity, before Ms Pelosi tested positive during an event marking the Affordable Care Act at which former president Barack Obama was also in attendance.

Ketanji Brown Jackson made history on Thursday when the Senate voted 53 to 47 to make her the first Black woman Supreme Court Justice in the country’s history.

Vice President Kamala Harris, herself a historic first as the first Black and Asian American woman vice president, was on hand to preside over the confirmation vote. Ms Jackson’s ascent to the highest court in the land was a moment of celebration for many Democrats.

Eric Garcia reports for The Independent from Capitol Hill.

In what is seen as a rare win for the administration, the 5th Circuit Court of Appeals in New Orleans reversed a lower court lawsuit challenging the mandate.

The appeals court has 17 active judges dominated by Republicans, including six Trump appointees.

It was after US District Judge Jeffrey Brown, who was appointed to the District Court for the Southern District of Texas by Donald Trump, had issued a nationwide injunction against the mandate in January by a 2-1 vote.

“The injunction seriously harms the public interest by impeding efforts to reduce disruptions from Covid-19 in federal workplaces,” the government’s lawyers said in their court filings.

Psaki: Governor Abbott has no authority for ‘publicity stunt’ plan to bus Texas migrants to DC

Ms Psaki was asked about the governor’s announcement at her daily news briefing by Fox News correspondent Peter Doocy. In her response, she pointed out that no Texas official, including the governor, had the legal authority to forcibly move persons out of their state, enforce federal immigration law, or even take any official actions across state lines.

‘I like what you’ve done with the place’: Obama visits Joe Biden’s White House

Voices: The most ridiculous questions asked of Ketanji Brown Jackson during her confirmation hearings

Andrew Feinberg recalls some of the mystifyingly absurb questions asked in Ketanji Brown Jackson’s Senate hearings, including: “Do you think we should catch and imprison more or fewer murderers?”

ICYMI: US will boycott G20 meetings if Russia allowed to attend

Ms Yellen raised questions about Russia’s future in the G20 at a US House Financial Services Committee hearing on Wednesday.

In a 420-3 vote, the House of Representatives passed legislation suspending permanent normal trade relations with Russia and Belarus amidst Russia’s ongoing invasion of Ukraine.

The Senate passed the bill unanimously 100-0 earlier on Thursday and it now heads to the desk of President Joe Biden, who plans to sign it.

The three no votes in the House were: Marjorie Taylor Greene (R-Ga), Thomas Massie (R-Ky), and Matt Gaetz (R-Fla).

In addition, in a 413-9 vote, the House passed legislation to ban imports of Russian oil, gas, and other energy products to the US.

The Senate also unanimously passed the bill 100-0 earlier in the day and Mr Biden is likewise planning to sign it into law.

A top US state department official has warned president Xi Jinping of “what might come his way” if China supports Russia’s Ukraine invasion.