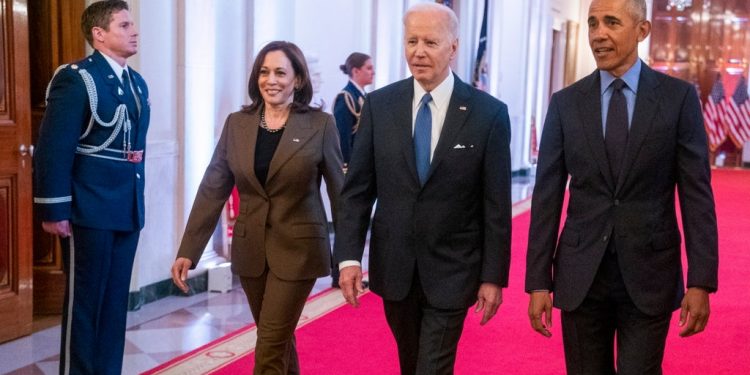 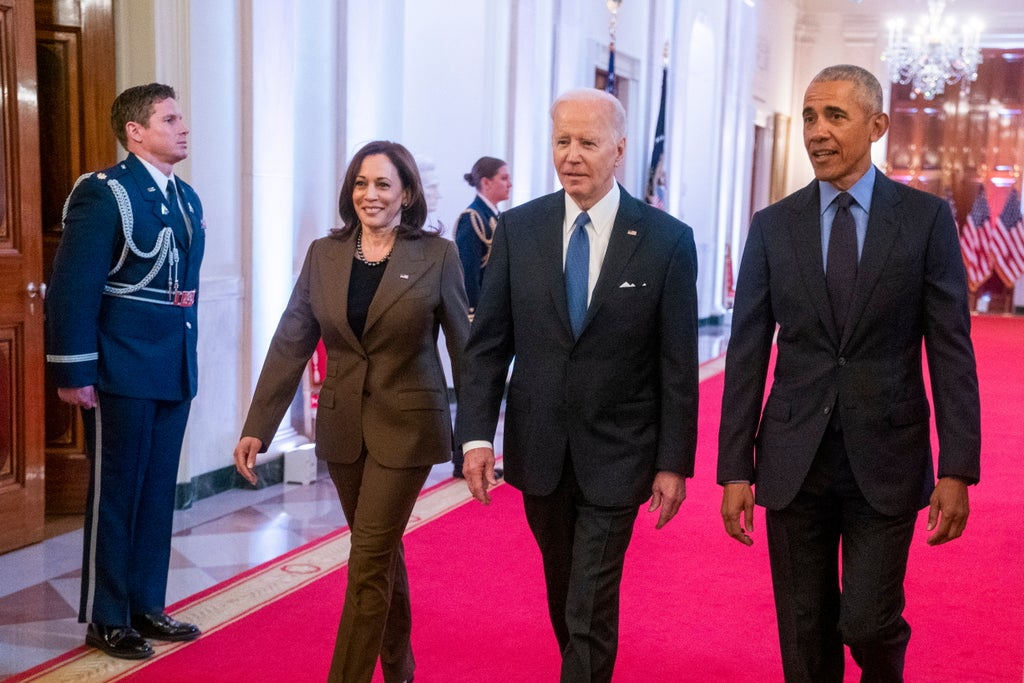 Barack Obama visited the White House on Tuesday for his first public event at the executive mansion since he left office. He participated in a celebration of the Affordable Care Act, aka Obamacare, as Joe Biden announced changes to the healthcare programme that could see as many as 200,000 uninsured Americans become eligible for new coverage.

The visit has many Democrats hoping that Mr Biden can benefit from his former boss’s still-high approval rating among the Democratic base. Mr Biden has lately struggled to raise his poor standing in the polls and there are serious worries that apathy and disappointment among Democratic voters could give an opening to Republicans in this year’s midterm elections. Mr Obama says that to win in the midterms, Democrats have a story to tell, they “just got to tell it.”

Meanwhile, on Capitol Hill, the Senate Judiciary Committee yesterday voted 11-11 on Judge Ketanji Brown Jackson’s nomination to the Supreme Court. The result will not stop Ms Jackson’s nomination from proceeding to the Senate floor; she appears to already have the support of 53 senators, with Republicans Susan Collins, Lisa Murkowski and Mitt Romney all breaking ranks to back her.

US Defence Secretary Lloyd Austin hits back at Matt Gaetz

US Secretary of Defence Lloyd Austin appeared so incensed by outlandish lines of questioning from Republican congressman Matt Gaetz that he ended up in a shouting match with the Florida representative by the end of Mr Gaetz’s five minute round.

Mr Austin was on Capitol Hill on Tuesday to testify at a House Armed Services Committee hearing regarding the Defence Department’s fiscal year 2023 budget request, but Mr Gaetz had apparently decided to use his time to berate the former US Central Command boss about what he described as US defence failures caused by the Pentagon’s embrace of “wokeness”.

Specifically, Mr Gaetz enquired about a lecture delivered at the US National Defence University by French economist and author Thomas Picketty entitled “Responding to China: The Case For Global Justice and Democratic Socialism”.

Republican Representative Adam Kinzinger of Illinois called his colleagues in Congress “children” for focusing more on Disney and culture war issues than the “genocide“ happening in Ukraine at the hands of Russia.

Mr Kinzinger said that the “world order” was being challenged for the first time since World War II, but that his fellow Republicans were acting like “a bunch of children.”

The Oklahoma state House voted overwhelmingly to pass a bill making it a felony to perform an abortion in the state punishable by up to 10 years in jail, in what is possibly the most restrictive anti-abortion bills passed since the US Supreme Court first signaled its willingness to curtail reproductive rights last year.

The legislation, which would punish any Oklahoman who performs an abortion with a lengthy jail sentence and a fine of up to $100,000, passed the state Senate last year before sailing through the state House by a margin of 70-14 on Tuesday.

She would become the first woman to lead a branch of the US military if she’s confirmed. Admiral Fagan has served as the vice commandant since June of last year, becoming the first woman to reach the rank of four-star admiral in the Coast Guard.

The mood on Capitol Hill

US Capitol police have captured a fox suspected of biting a Congressional lawmaker on the leg.

The police department collared the animal after warning politicians and staffers on Capitol Hill to be on the lookout for “aggressive fox encounters.”

Graeme Massie reports on one of the more unexpected stories to come out of DC today.

Here’s an exclusive look at his suit from Punchbowl News:

Former President Barack Obama had a simple message for Democrats who worry about losing their majority in the 2022 midterm elections:

“We got a story to tell, just got to tell it,” he said in response to NBC News’s Peter Alexander.

The former president received a standing ovation as he returned to the White House for the first time since leaving the Oval Office in 2017 to on hand to commemorate the 12th anniversary of the passage of his signature health care law, the Affordable Care Act, which received the moniker Obamacare in the press.

Justin Vallejo has the latest.

Voices: The most ridiculous questions asked of Ketanji Brown Jackson

Andrew Feinberg takes a look at the most ridiculous questions asked of Judge Ketanji Brown Jackson during her confirmation hearings, including: “Do you think we should catch and imprison more or fewer murderers?”

“I’m honoured to nominate Admiral Linda Fagan as Commandant of the US Coast Guard. Her leadership and integrity are second to none. If confirmed, Adm Fagan will be the first woman in history to serve as Commandant and the first female service chief,” says President Joe Biden.

“My Administration is committed to seeing more qualified women at the highest levels of command and making sure women can succeed and thrive throughout their military careers.”