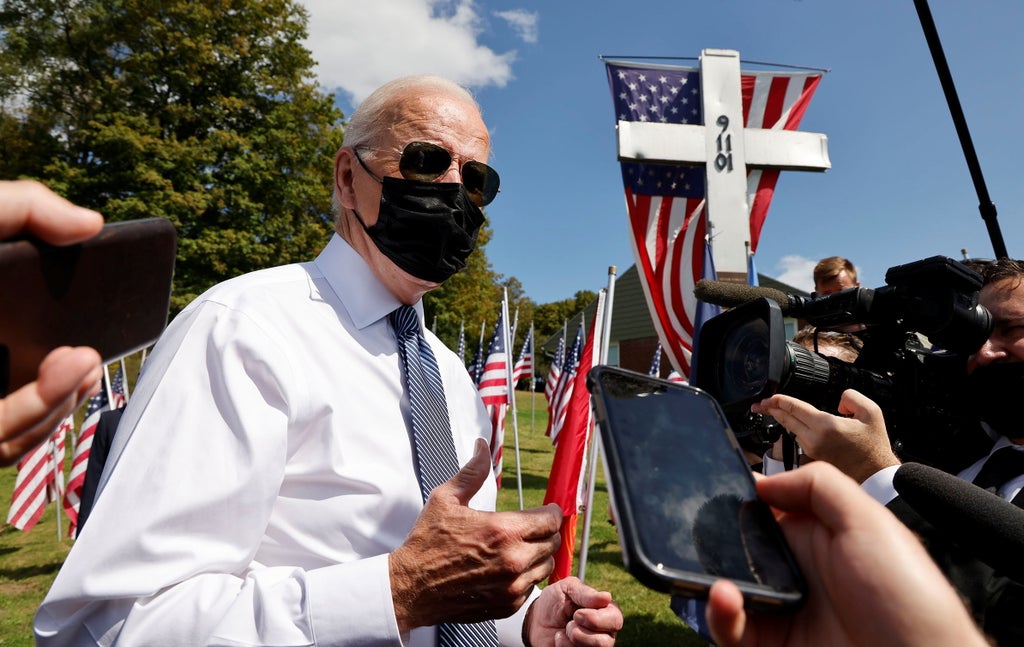 Following a wreath-laying ceremony for victims of United Airlines Flight 93, President Joe Biden greeted first responders at a firehouse in Shanksville, Pennsylvania, where a memorial recognised the 40 passengers and crew members who averted untold devastation by wrestling control of the plane and crashing in a nearby field on 11 September, 2001.

It was his second of three memorials for victims of the 9/11 terror attacks on Saturday. The president travelled to New York City for a service at the site of the World Trade Center towers on Saturday morning before he visited Pennsylvania. He returned to Washington DC for a wreath-laying ceremony at the Pentagon.

Mr Biden praised earlier remarks from Republican former president George W Bush, whose speech in Shanksville called for national unity, which Mr Bush said he observed in the aftermath of the attacks and his administration’s wars but claimed is now missing from a volatile political landscape.

It is an issue Mr Biden invoked throughout his campaign, promising to unite the nation after Donald Trump’s antidemocratic threats, and in the White House, where he has cast the US in an existential battle to defend democracy and human rights.

“Are we going to – in the next four, five, six, 10 years – demonstrate that democracies can work, or not?” the president said on Saturday. “We actually can, in fact, lead by the example of our power again.”

Mr Biden said that “a number of serious Republicans, in the past and a few who are still around, call me and tell me, ‘What can I do to help?’”

He also criticised “the stuff that’s coming out of Florida,” where Governor Ron DeSantis has sought to ban mask mandates and politicize the response to the coronavirus pandemic, as Mr Biden’s administration accelerates vaccine requirements. And the president admonished the former president, not by name, for his comments suggesting that Confederate war general Robert E Lee “had been in Afghanistan, we would have won.”

“They think this makes sense for us to be in this kind of thing where you ride down the street and someone has a sign saying ‘F so and so?’” Mr Biden said.

While Mr Trump spent the anniversary of the attacks criticising his predecessor for the withdrawal of American troops from Afghanistan, Mr Biden defended his administration’s response and pledge to end the nation’s longest war, as the US reflects on the first 9/11 anniversary without it.

“Could al-Qaeda come back? Yeah,” Mr Biden said. “But guess what, it’s already back [in] other places. What’s the strategy? Every place where al-Qaeda is, we’re going to invade and have troops stay in? C’mon.”

Twitch Hits Back at ‘Hate Raid’ Trolls With a Lawsuit

Tan France: ‘People assume I’m older than I am’ | Life and style

Tan France: ‘People assume I’m older than I am’ | Life and style