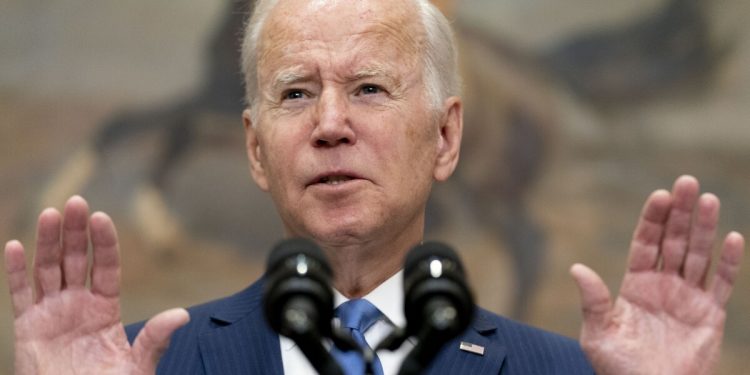 President Biden shot down speculation that he is open to canceling up to $50,000 in debt for federal student loan borrowers Thursday, after Democratic lawmakers in favor of forgiveness suggested he was moving in their direction.

“I am considering dealing with some debt reduction,” Biden told reporters at an event highlighting his request to Congress for additional aid for Ukraine. “I am not considering $50,000 debt reduction. But I’m in the process of taking a hard look at whether or not there will be additional debt forgiveness.”

Biden has faced increasing pressure to announce how he plans to address student loan debt, a key issue for many younger voters who make up a critical part of the Democratic base. Members of his party have urged him to use executive action to either fulfill his campaign promise of forgiving $10,000 in debt for borrowers, or issue more generous relief.

The president, however, has been reluctant to act unilaterally. There’s some debate over whether he has the legal authority to do so, and any move would almost certainly be challenged in court.

More than 43 million Americans have $1.6 trillion in federal student loan obligations, but the vast majority have been exempt from repaying them for the last two years under a payment moratorium introduced by then-President Trump in March 2020 and extended multiple times by Biden.

The payment pause is currently set to expire Aug. 31, but Biden has said he will either announce a plan to help borrowers, or extend the pause.

Earlier this week, members of the Congressional Hispanic Caucus who met with the president said he seemed very open to canceling some debt through executive action. “I feel very confident that he is pushing on his team to do something, and to do something significant,” Rep. Tony Cárdenas, a California Democrat, told the Washington Post.

Senate Majority Leader Charles E. Schumer (D-N.Y.), who backs $50,000 in forgiveness, said Wednesday that he thought the president was getting closer to supporting that amount.

“I think the president is moving in our direction,” Schumer said on the Senate floor. “My talks with him and his staff have been very fruitful over the last little while, and I am hopeful that he will do the right thing. We’re getting closer.”

Biden knocked that down Thursday.

Backing large-scale forgiveness would have been a major pivot for the president, who has previously supported legislation to forgive $10,000 in debt.

Since taking office his administration has forgiven $17 billion in debt for borrowers who are disabled, who were defrauded by their colleges or who are enrolled in a forgiveness program for public servants.

The federal student loan moratorium, which also reduced interest rates to zero, cost an estimated $100 billion during its first two years, and is costing an additional $5 billion a month.

That price tag, and the discussion of broader forgiveness, has drawn the attention of Republicans. Five GOP senators, including Senate Minority Whip John Thune of South Dakota, introduced legislation to end the moratorium on payments and block the president from canceling debt.

“Taxpayers and working families should not be responsible for continuing to bear the costs associated with this suspension of repayment,” Thune said in a statement announcing the legislation.

Mother’s Day gifts that show Mom you care every day

Mother's Day gifts that show Mom you care every day