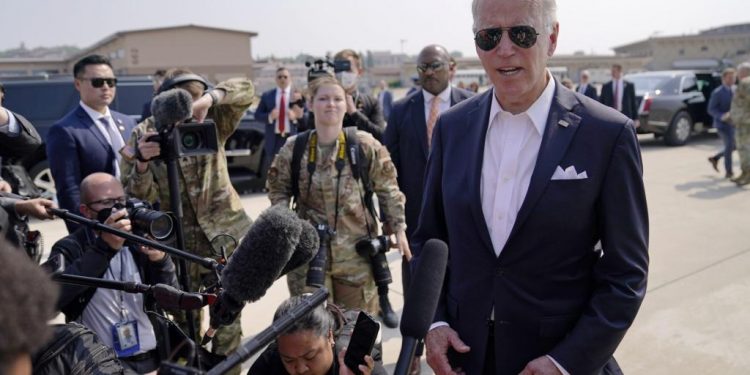 President Biden said the increasing spread of monkeypox, which has been detected in the United States and Europe, is something “to be concerned about.”

Biden was asked during a stop in South Korea on Sunday what his health advisers have been telling him about the disease that rarely spreads beyond Africa.

“They haven’t told me the level of exposure yet, but it is something that everybody should be concerned about,” he told reporters at Osan Air Base before boarding Air Force One for a flight to Japan.

“We’re working on it hard to figure out what we do and what vaccine, if any, may be available for it,” he continued. “But it is a concern in the sense that if it were to spread, it’s consequential.”

Jake Sullivan, the White House national security adviser, said the US is prepared and has a supply of “vaccine that is relevant to treating monkeypox.”

“We have vaccine available to be deployed for that purpose,” Sullivan told reporters aboard the flight to Japan. He said the president continues to be updated regularly on any developments by his health team.

“I’ve been out on the road, giving him updates based on the written inputs we are getting from our health and medical team and, you know, walking through with him what the — what the current state of play looks like and, as we learn about cases both in the United States and elsewhere, making sure that he’s tracking the picture,” Sullivan said.

According to the World Health Organization, there have been 92 confirmed cases of monkeypox worldwide, with another 28 suspected cases, as of Saturday.

A patient in New York City is being examined after testing positive for a family of viruses that monkeypox belongs to, but it is still unclear if the person is infected with the rare disease. Although the disease belongs to the same virus family as smallpox, its symptoms are milder. People usually recover within two to four weeks without needing to be hospitalized, but the disease occasionally is deadly.

The virus was first identified in monkeys and rarely spreads outside of Africa, which has made the latest rash of cases alarming to health officials.

Mystery of Universes Expansion Rate: Hubble Data Shows That “Something Weird” Is Going On - SciTechDaily