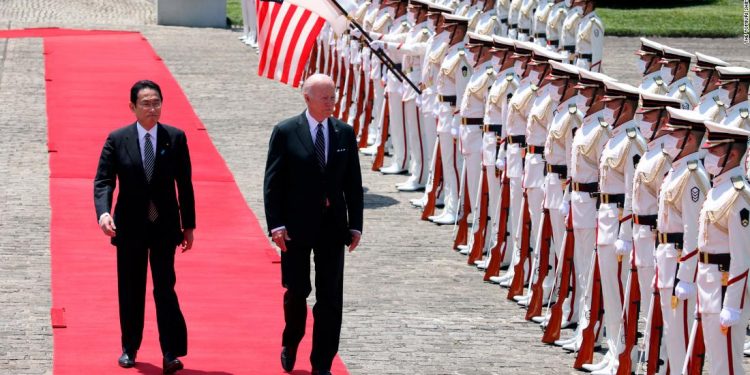 President Joe Biden on Monday plans to unveil a long-sought economic plan for engaging a region coming increasingly under the influence of China, as he enters the second leg of his debut tour of Asia.

The announcement is one of the centerpieces of Biden’s visit to the continent, which began last week in South Korea and is continuing this week in Japan. Before Biden unveils the Indo-Pacific Economic Framework, which his aides refer to as IPEF, he called on Japan’s Emperor Naruhito and sat for bilateral talks with Prime Minister Fumio Kishida, where security topics are expected to arise.

“The United States remains fully committed to Japanese, Japan’s defense, and we will face the challenges of today and the future together,” Biden said in his meeting with Kishida, their first formal face-to-face.

“The purpose of the visit is to increase our cooperation with other nations of the region and deliver concrete benefits to the people of the Indo-Pacfic region,” Biden said, going on to thank Kishida for joining a US-led effort to punish Russia for its invasion of Ukraine.

Biden was welcomed to the Akasaka Palace with a stately ceremony that included the playing of national anthems and an inspection of ceremonial honor guards. Biden watched and placed his hand on his heart for the playing of the Star Spangled Banner.

China has loomed over each of Biden’s stops, a mostly unspoken but ever-present factor in his push to reorient American foreign policy to focus more on Asia. When he meets Tuesday with leaders of a revitalized “Quad” grouping – the United States, Japan, India and Australia – it will be with the tacit intention of countering Beijing’s attempts to expand its influence among its neighbors.

The economic framework comes with a similar goal. Ever since then-President Donald Trump withdrew the United States from the Trans Pacific Partnership – the massive trade agreement negotiated during the Obama presidency – the US has been without a defined plan to engage this region economically.

Meanwhile, China has secured several trade agreements with its neighbors, and has sought to wield its economic influence globally through the Belt and Road Initiative.

The plan Biden will announce Monday isn’t a trade agreement in the traditional sense. It includes one “pillar” related to trade, but also incorporates other areas like making supply chains more resilient, promoting clean energy and combating corruption.

By unveiling the framework, Biden appears to be acknowledging he has little intention of rejoining TPP, which remains unpopular among United States lawmakers who would need to ratify the deal. Instead, he hopes to generate an economic sphere that can compete with China.

That will require convincing other countries to join – not only staunch partners like Japan and South Korea but smaller nations, particularly in Southeast Asia, who aren’t as closely aligned with the United States.

The plan’s early detractors have suggested it lacks any incentives – like lowering tariffs – in return for joining up. Biden’s aides suggest there are other ways to facilitate more trade and market access, and that the framework itself provides an attractive opportunity for participating countries to work closely with the United States. And if anything, Biden’s announcement Monday reflects just the beginning of the process for writing the plan.

Already, China has responded harshly to the framework, with a senior envoy calling it a “closed and exclusive clique.”

Speaking to reporters aboard Air Force One as Biden was traveling from South Korea to Japan, national security adviser Jake Sullivan said the criticism was expected.

“It’s not a surprise to me that China has concerns about the number of countries, the diversity of countries who have expressed interest in and enthusiasm for IPEF,” he said. “It’s natural that they’re going to try to find ways to raise questions.”