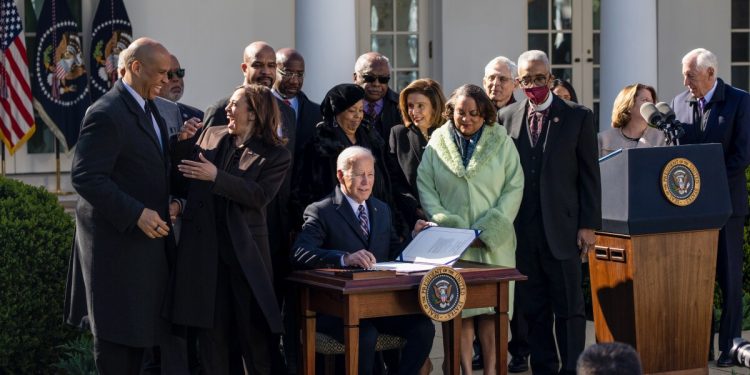 “Racial hate isn’t an old problem,” Biden said after signing the bill in the Rose Garden. “It’s a persistent problem.”

The Emmett Till Anti-Lynching Act is named in honor of a 14-year-old Black boy who was kidnapped and tortured to death in Mississippi in 1955. The law will designate conspiracies to commit crimes, in which hate is the motivating factor and which result in death or serious bodily injury, as federal hate crimes punishable by up to 30 years in prison.

Its passage comes nearly two years after the murder of George Floyd, an unarmed Black man, by a Minnesota police officer who knelt on Floyd’s neck for about nine minutes. Captured on cellphone video, the killing evoked memories of Till’s murder and countless more recent instances of police brutality against Black Americans. It quickly prompted calls for police reform. When lawmakers failed to reach a compromise on legislation to overhaul law enforcement training and practices, the anti-lynching legislation became a fallback of sorts.

Stepping to a lectern on a frigid afternoon after he signed the bill into law, Biden spoke about the history of lynching in America and the long process of outlawing it, addressing Till’s loved ones and others who pushed for anti-lynching legislation throughout the country’s history.

“Thank you for never, ever giving up,” he said, declaring that the new law “is not just about the past.”

Biden described the “bullets in the back of Ahmaud Arbery,” a 25-year-old Black man shot and killed by a group of white men in 2020 while jogging through his Georgia neighborhood, as evidence that the law is “about the future as well.”

“The same racial hatred that drove the mob to hang a noose brought that mob carrying torches out of the fields of Charlottesville,” Biden said, referencing the 2017 white supremacist rally in a Virginia college town that turned deadly when a marcher ran over a counterprotester with his car.

Noting how mainstream lynching was a century ago across the American South and how white spectators attended public executions and collected postcards of Black corpses, Biden said racism persists because of those who condone or ignore it. Vice President Kamala Harris echoed that point, lauding the Black press for shedding light on violence that the mainstream press ignored for decades and heralding the new law as a matter of “unfinished business — to acknowledge the horror that is part of our history.”

She continued: “Lynching is not a relic of the past. Racial acts of terror still occur in our nation. And when they do, we must all have the courage to name them and hold the perpetrators to account.”

Sens. Cory Booker (D-N.J.) and Tim Scott (R-S.C.) introduced the Senate version, which was passed unanimously by a voice vote this month. Rep. Bobby L. Rush (D-Ill.) was the lead sponsor of the House version, which in February passed in a 422-3 vote. Republican Reps. Andrew Clyde of Georgia, Thomas Massie of Kentucky and Chip Roy of Texas were the only lawmakers to vote against the bill.

“Perpetrators of lynching got away with murder time and time again — in most cases, they were never even brought to trial,” said Rush, following the Senate passage. He called the act a unique weapon of “racial terror that has for decades been used to maintain the white hierarchy.”

Booker tweeted that he was “overjoyed” his colleagues backed the bill and that the “time is past due to reckon with this dark chapter in our history.”

Scott, who did not attend the bill-signing, tweeted that the new law “undoubtedly marks progress for our nation.”

Since 1900, lawmakers have tried more than 200 times to make lynching a federal hate crime. The lawless, racist acts of violence occurred around the nation and became especially pervasive in the Deep South after the Civil War.

At least 4,743 people — 3,446 of them Black and 1,297 white — are said to have been lynched between 1882 and 1968, according to university records. The violence was often a public display and was carried out by law enforcement, white supremacist groups and ordinary citizens without due process for victims. While lynching is most commonly associated with hanging, the term covers a much broader scope of lawless mob violence and executions.

Rep. Leonidas Dyer (R-Mo.) in 1917 became concerned with the prevalent practice after witnessing white mobs murder Black citizens in St. Louis, according to congressional archives. The racist deadly riot drew national condemnation and propelled Dyer to introduce the first major legislation the following year with support from the National Assn. for the Advancement of Colored People.

After Republicans took control of Congress the next year, efforts to pass the bill were ultimately blocked by white Southern Democratic senators who were largely concerned that perpetrators in their districts would be prosecuted for participating in lynchings, according to Hasan Kwame Jeffries, a historian at Ohio State University.

Efforts to make lynching a hate crime repeatedly failed throughout the 1900s even as individual murders drew international attention. Widely distributed images of Till’s mutilated body helped catapult support, particularly among African Americans, for the burgeoning civil rights movement, but did not lead to lynching being designated as a federal crime.

Following Floyd’s murder in 2020, much of the nation pressured Congress to pass robust police reform. Though House lawmakers passed a wide-ranging reform bill, it languished in the Senate with Democrats failing to get enough Republican support to bypass the filibuster and end debate. Democrats instead focused on passing anti-racist legislation, such as the lynching bill, that could win support among Senate Republicans, Jeffries said.

Jeffries noted that lynchings are increasingly rare this century, with Arbery’s murder the most recent, high-profile example. The time when this bill would have had a wide-sweeping effect was when advocates pressed for it throughout much of the last century, he said.

“The symbolism of this bill is meaningful but modest,” said Jeffries, adding that it could be used to prosecute some people in the future.

Police reform is what advocates are demanding this century, he maintained, not the anti-lynching bill.

But “this is what can be accomplished in the Senate when you have people who want to look like they [are listening to advocates] but don’t want to do what people are asking them to do,” Jeffries said.