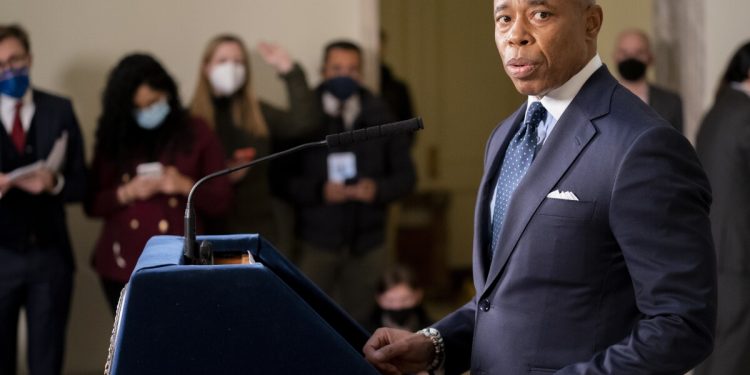 President Biden, in the midst of a political reset aimed at getting him out of Washington to emphasize the Democrats’ case to voters ahead of November’s midterm elections, traveled Thursday to New York City to embrace its new mayor — and his approach to handling crime and public safety.

The election last year of Eric Adams, a Black former police captain whose focus on public safety propelled him to the top of a crowded mayoral primary field, underlined the broadening salience of the issue with swing voters and even Democrats amid a national surge in violence since the onset of the COVID-19 pandemic.

The last two years have seen a spike in homicides, shootings, brazen “smash mob” robberies of luxury stores and shoplifting, as economic shutdowns devastated poorer communities and the public health crisis left many police departments understaffed. The country’s homicide rate, the crime metric most closely tracked by criminologists and police officials, rose 30% from 2019 to 2020, the highest one-year increase in modern history, according to federal statistics.

The violence has occurred mostly in urban areas such as New York City, where five police officers have been killed since the beginning of the year. Just Wednesday, police officers laid to rest Wilbert Mora, who was shot to death after responding to a domestic disturbance call at a Harlem apartment this month. It came just days after the funeral for Mora’s partner, Jason Rivera, who was killed in the same incident.

The uptick in violence has forced Democrats to showcase a new seriousness about an issue that can no longer be dismissed as a scare tactic hyped by Republicans and Fox News. But they’re attempting to reconcile a tougher stance on crime with calls for police reform in response to numerous high-profile cases of excessive and deadly force by white officers against unarmed Black people. The all-of-the-above approach taken by Adams — and mirrored by Biden, both men say — may offer the party a template to follow in the run-up to November’s midterm elections.

Adams, who has heaped praise on “my dude” Biden and called himself “the Biden of Brooklyn,” is looking to institute a range of changes to address the spike in crime. The city has invested new federal funds in an alternative emergency response program that would ensure mental health professionals field mental health distress calls in an effort to reduce the chance of violent escalation, as well as youth engagement programs and summer employment initiatives. But he has also called for rolling back a recent change to the city’s bail process to allow judges more leeway and to reinstate a plainclothes unit that was disbanded in 2020 amid evidence of chronic misconduct, proposals that have drawn the ire of criminal justice reform advocates.

The strategy is a major shift from that of his predecessor, and a 180-degree turn from the “defund the police” calls that arose in the summer of 2020 after the murder of George Floyd, a Black man, by a Minneapolis police officer. Although those calls came mainly from activists, Democrats’ broader support for the cause of racial justice and police reform enabled Republican campaign attacks that fall suggesting that Democrats wanted to cut funding for law enforcement.

“That’s one of the reasons Republicans really held on down ballot” in 2020, said Sarah Longwell, a former GOP strategist who conducts voter focus groups and leads a pro-democracy advocacy group.

In visiting New York and aligning himself with Adams, Biden is rebutting a potent GOP attack against Democrats by showing the nation that he and his party take crime seriously. It’s a posture, strategists believe, that down-ballot candidates in swing districts would be wise to adopt.

“For Democrats to be successful in 2022, they are going to have to acknowledge that there is anxiety around health, anxiety around the economy and anxieties about public safety,” said Dan Sena, a Democratic strategist in Washington. “Leaning into our record on funding public safety makes it harder for the other side to win on that issue.”

The president will be accompanied on the trip by Atty. Gen. Merrick Garland, and they plan to visit NYPD headquarters with Adams and Gov. Kathy Hochul to discuss coordinated federal-local efforts to get illegal guns off the street. After that, Biden will travel to Queens to meet with activists working on violence prevention programs.

Biden and Garland will tout the progress made by new federal “strike forces” tasked with combating violent crime and gun trafficking, as well as other executive orders, White House Press Secretary Jen Psaki said this week. And he’ll seek to remind voters of the $360 billion in additional funding Democrats approved for local governments as part of the $1.9-trillion American Rescue Plan enacted in March, much of which has gone to the hiring of additional police officers.

Garland will announce that he is directing U.S. attorneys across the country to prioritize combating violent crime with a heightened focus on gun trafficking, according to a senior administration official who briefed reporters Wednesday on the condition of anonymity. And the Justice Department will launch a national “ghost gun” enforcement initiative to better coordinate law enforcement efforts to confiscate unserialized firearms before they’re used in crimes, the official said.

Biden’s embrace of law enforcement is not surprising in light of Republican successes in elections last year and the looming 2022 midterms. Longwell, the former Republican strategist, said she conducted interviews with voters who backed Glenn Youngkin, the GOP’s Virginia gubernatorial candidate and now the governor, a year after they’d voted for Biden, and found that crime and safety were among their top concerns.

“Democrats now have an awareness that this is a potential liability for them and that they need to get on offense on the issue because it’s important to swing voters,” she said.

Biden, who made clear during his campaign and presidency that he opposes defunding the police, supported bipartisan talks to forge a compromise around police reform that ultimately fell apart. And the George Floyd Justice in Policing Act, which sought to outlaw the use of chokeholds and carotid holds by police officers, revamp training practices and invest in community policing efforts, has been stalled since it passed the House last year, because Democrats lack the 60 votes required to debate and pass it in the Senate.

According to a recent Pew Research Center poll, a majority of the public (59%) don’t have confidence in Biden’s ability to “effectively handle law enforcement and criminal justice issues.” So it’s no surprise the White House has been pushing back forcefully at criticism from Republicans, pointing to Biden’s actions on crime and his budget proposal that requested an additional $500 billion to support efforts to reduce gun violence.

“I think we all agree, or should agree, that violent crime is a serious problem,” Psaki said this week. “Our view is that instead of turning this into a political football, we need to be focused from the beginning of the president’s time, all of his time in office, and reducing crime and keeping our communities safe.”

Brian Arbour, an associate professor of criminal justice at New York’s John Jay College of Criminal Justice, viewed Biden’s support for police funding and reform efforts as an attempt to satisfy activists and his party’s base without making himself vulnerable to charges he is soft on crime.

“Biden is trying to walk the middle point in that tension which is always difficult for politicians,” Arbour said.

During the 2020 primary campaign, Biden apologized for his role in enacting the 1994 crime bill that led to a major increase in the incarceration rates of Black Americans, most for drug-related offenses.

As president, he has held multiple events touting his stance on crime. But unlike President Trump, who blasted Democratic mayors in major cities and stoked fears of marauding immigrant gangs, Biden has framed violent crime as an issue of “illegal guns.”

Understanding Stock Splits: How They Work