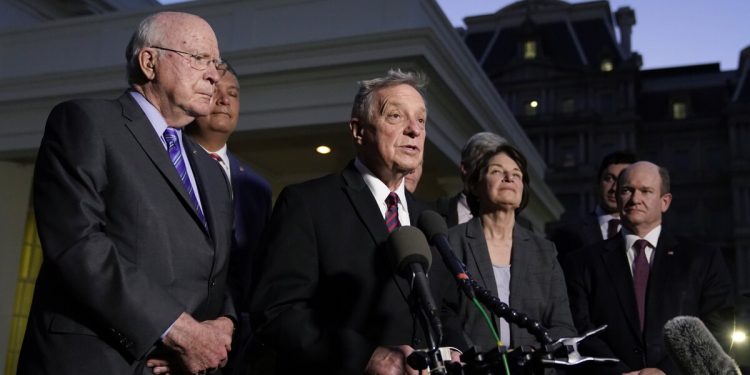 President Biden told a group of Senate Democrats on Thursday that he will meet with potential Supreme Court nominees “soon.”

Members left the meeting with the impression that Biden’s pick could win bipartisan support in the Senate, where Supreme Court battles in recent years have become bitterly partisan.

They also commended the president for following through on his commitment to nominate a Black woman to the high court and said that every woman under consideration is abundantly qualified.

Biden sought their input on specific candidates, senators said, and told them what qualities he was looking for in a nominee.

“We just had a great conversation … with our president about the factors he’s going to be weighing,” Sen. Chris Coons (D-Del.) said. “One of them that we discussed was someone in the model of [retiring] Justice [Stephen G.] Breyer: someone who will write stirring, compelling, lasting arguments — hopefully in the majority at some point, but probably in the coming few years in the dissent. But someone who is persuasive.”

Biden told NBC’s Lester Holt in an interview taped earlier Thursday that he wants to nominate a jurist “with the same kind of capacity Judge Breyer has, with an open mind, who understands the Constitution, interprets it in a way that is consistent with the mainstream interpretation of the Constitution.”

He also said he doesn’t intend to make an ideological decision, and that there’s been a “deep dive” on four potential nominees.

Those on “the shortlist are nominees who are incredibly well-qualified and documented,” Biden told Holt. “They were the honor students. They have come from the best universities. They have experience, some on the bench, some on the practice of law.”

Ahead of the president’s meeting with Senate Democrats, a group of 14 Black female lawmakers outlined the type of jurist they want to see elevated.

“The nomination of a Black woman is not mere symbolism; it is an essential step for our country’s promise of justice for all,” the congresswomen said in a letter to Biden.

“It is therefore of utmost importance that the administration appoints a Black woman with a strong track record of advancing civil and constitutionally protected rights, and whose work has shown dedication to affirming the rights of our country’s most marginalized communities,” the letter states.

Led by Rep. Cori Bush (D-Mo.), 13 other Black women in the House signed the letter — including Rep. Barbara Lee (D-Oakland).

Biden has said he plans to announce his choice to succeed Breyer by the end of February, Black History Month. Durbin said the president didn’t give more specific timing in his meeting with Senate judiciary Democrats.

Both of California’s senators, Dianne Feinstein and Alex Padilla, serve on the panel, which will vet the nominee at a public hearing and vote in committee before the nominee can advance to the floor. Feinstein wasn’t present at Thursday’s meeting.

All but seven Supreme Court justices in U.S. history have been white men, the women noted, adding that it’s no coincidence the court’s precedents have largely reflected the perspectives of white men.

“We write to you as a collective of 14 Black women lawmakers serving in the United States House of Representatives, but write on behalf of the over 21 million Black women in America,” they said.

“There is not a single Black woman in the United States Senate to vote to confirm the first Black woman nominated to the Supreme Court,” the letter reads. “For this reason, we write as a collective to commend you for this historic announcement, and ask that the nominee reflect a deep and abiding commitment to adjudicate with moral and legal clarity.”

Jackson was confirmed to the circuit court last summer with the support of all Democrats and three Republicans.

House Majority Whip James E. Clyburn (D-S.C.), whose timely endorsement in the 2020 Democratic presidential primary saved Biden’s campaign, has publicly pushed for Childs, who has also received vocal support from both of South Carolina’s Republican senators, Lindsey Graham and Tim Scott. But she has garnered criticism from progressives who argue that she’s “anti-labor.”

In a roundtable with a group of Black reporters Tuesday, Bush said members shouldn’t be pitting Black women against one another as Biden considers a nominee. Asked specifically about Childs, Bush said she doesn’t know her background well. But in earlier comments, the Missouri Democrat said she wanted to see a nominee who is strong on criminal legal reform and worker protections.

“I don’t have a name. I want the person that has those qualifications to rise to the top,” she said. “I just don’t think it’s our place to pit Black women against each other trying to get this spot. No, let’s push all of them up there.”