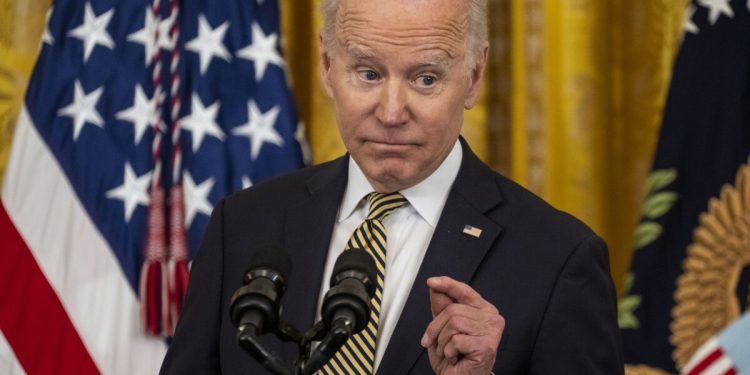 According to a White House readout of the call, Biden “described the implications and consequences if China provides material support to Russia as it conducts brutal attacks against Ukrainian cities and civilians” and “underscored his support for a diplomatic resolution to the crisis.”

It wasn’t immediately clear how Xi will respond to Biden’s warnings or if he’s decided whether to help Russia, a senior administration official said during a briefing for reporters.

“The president really wasn’t making specific requests of China. He was laying out his assessment of the situation, what he thinks makes sense, and the implications of certain actions,” said the official, who spoke on the condition of anonymity. “We will see … what decisions China makes in the days and weeks ahead,” the official said.

The call, the first contact between the leaders in four months, followed a lengthy and tense meeting between the countries’ national security officials earlier this week in Rome. The potentially difficult call on Friday could mark a pivotal moment in Russia’s war against Ukraine and Washington’s long-term relations with Beijing.

Beijing’s official summary of the call described the conversation as “candid and in-depth” and did not condemn Russia’s invasion. It called for direct dialogue to “ease the security concerns of both Russia and Ukraine” and stated that China “stands for peace and opposes war.”

“All sides need to jointly support Russia and Ukraine in having dialogue and negotiation that will produce results and lead to peace,” the Chinese government stated.

That statement of at least outward neutrality is notable coming just a month after Xi and Russian President Vladimir Putin declared their countries enjoyed a “friendship without limits.”

The call began at 6:03 a.m. Pacific and ended an hour and 50 minutes later, the White House said.

As the West has rallied around Ukraine’s cause, imposing severe economic sanctions against Russia, Putin has become increasingly isolated and desperate. Russian forces, somewhat surprisingly, have been hammered by fierce Ukrainian resistance and failed to make deep incursions into the country after more than three weeks of fighting.

Given the way the war has gone, China offers Russia one of its last economic and military lifelines.

And while there is no question that Xi and Putin have been aligned on many issues, Beijing must balance its allegiance to a weakened autocrat against its relationships with major trading partners and the long-term risks of escalating a major conflict with the U.S. and Europe.

Biden on Wednesday authorized an additional $800 million in defense aid for Ukraine, a package that includes anti-tank and surface-to-air missiles, heavy munitions and drones. That came just hours after Ukrainian President Volodymyr Zelensky gave an impassioned address to a joint session of Congress in which he asked Biden and the U.S. to do more to help defend his country.

Although Russia and Ukraine have engaged in peace talks, there has been little evidence that Putin is serious about negotiating an end to the conflict, even after losing an estimated 7,000 to 9,000 fighters and amid difficulties with maintaining supply lines and finding reinforcements. With Russia’s ground assault struggling to make progress, Putin has increasingly turned the fight into one of attrition, indiscriminately bombing Ukrainian cities with little regard for civilians.

Xi also brought up Taiwan, the senior administration official said. Biden, they continued, expressed U.S. support for the longstanding “One China” policy, under which Taiwan is viewed as part of mainland China, and for the maintaining of the current status quo.

Tensions across the Taiwan Strait have risen in recent months, as the self-ruling island of 24 million people has been bracing for a potential invasion by Chinese forces given the increase in provocative military exercises and the apparent likelihood of the Chinese Communist Party attempting to fulfill its long-held goal of “reunifying” Taiwan with the mainland.

How to Update an Android Device