Biden Was Elected ‘to Stop the Crazy’ and Not ‘Transform America’ 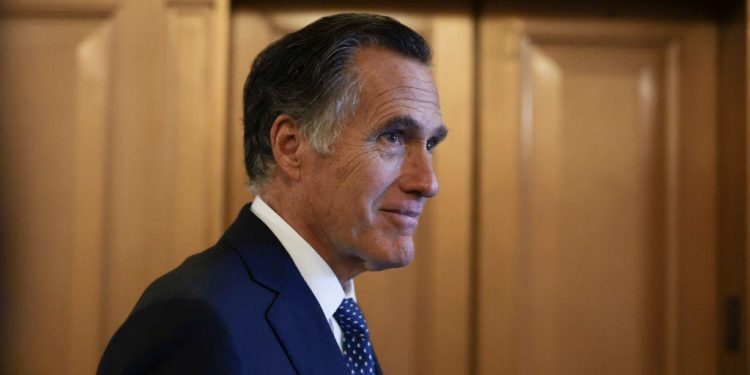 
Sen. Mitt Romney on Sunday dinged President Joe Biden’s governing approach, arguing that the veteran Democratic lawmaker was elected to restore a sense of normalcy to government and was not put into office to “transform” the country.

During an interview on NBC’s “Meet the Press,” the Utah Republican — who was also the party’s presidential nominee in 2012 — told host Chuck Todd that Biden has needed to adhere to his commitment to bridge partisan divisions in the country in the wake of the president’s fiery voting-rights speech in Atlanta last week.

“President Biden said he was going to try to unite the country,” the senator said. “His comments in Georgia did not suggest he’s trying to pull us back together again.”

He continued: “He’s got to recognize that when he was elected, people were not looking for him to transform America. They were looking to get back to normal. To stop the crazy. And it seems like we’re continuing to see the kinds of policy and promotions that are not accepted by the American people.”

Romney’s comments mirrored the sentiment of moderate Democratic Rep. Abigail Spanberger of Virginia, who said last November that voters didn’t elect Biden to become the next Franklin D. Roosevelt in pushing for changes in government but to move away from the tumult of the administration of former President Donald Trump.

For months, Democrats have sought to enact key voting-rights legislation — namely the Freedom to Vote Act and the John Lewis Voting Rights Advancement Act — in the face of the GOP blocking the bills in the Senate, along with opposition to a filibuster carve-out from Democratic Sens. Joe Manchin of West Virginia and Kyrsten Sinema of Arizona.

In the evenly-divided Senate, Biden’s most ambitious policy items — including the roughly $2 trillion Build Back Better social-spending bill that invests in health care, early education, and climate change — have faced a tough road to passage.

Romney, who worked with Biden to pass the $1.2 trillion bipartisan infrastructure bill that was signed into law last November, said that the president should push for a “reset” regarding his presidency, arguing that the Democrat has had “a bad year.”

The senator pointed to concerns surrounding inflation, the rise in illegal crossings at the US-Mexico border last year, the US withdrawal from Afghanistan, and logistical issues with Americans accessing COVID-19 testing kits as the Omicron variant spreads throughout the country.

“Things are not going well,” Romney said. “And the president needs to stop and reset and say what is it he’s trying to accomplish?”

He continued: “And if it’s to try and transform America, he is not going to unite us. Bringing us together means finding a way to work on a bipartisan basis. He had one success, the infrastructure bill, and that was done by Republicans and Democrats in the Senate working together. Build on that kind of success.”