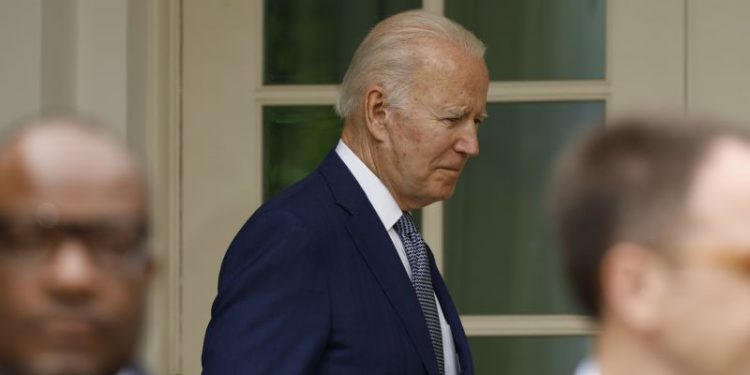 Biden told reporters earlier Sunday he had “not yet” spoken with victims’ families and was “trying to work out the schedule” to make a trip to the area. He also spoke by phone with Democratic New York Gov. Kathy Hochul on Sunday.

Biden expressed condolences for the families during remarks Sunday at the National Peace Officers Memorial Service and said he was receiving regular briefings from his team.

“We’re still gathering the facts, but already, the Justice Department has stated publicly that it’s investigating the matter as a hate crime, racially-motivated act of white supremacy and violent extremism. As they do, we must all work together to address the hate that remains a stain on the soul of America. Our hearts are heavy once again, but our resolve must never waver,” the President said Sunday.

The 18-year-old suspected of opening fire at a Tops Friendly Markets store in a predominantly Black neighborhood told authorities he was targeting the Black community, according to an official familiar with the investigation. The alleged gunman made disturbing statements describing his motive and state of mind following his arrest, the official said. He traveled from another New York county hours away and livestreamed the attack on the social media platform Twitch.

The US Department of Justice is investigating the mass shooting “as a hate crime and an act of racially-motivated violent extremism,” according to a statement from US Attorney General Merrick Garland.

The FBI is assisting in the investigation, Stephen Belongia, special agent in charge of the FBI Buffalo field office, said at a news conference after the shooting.

Saturday’s massacre in Buffalo is the latest high-profile mass shooting in which authorities have said the suspect was motivated by hate, including attacks at a Walmart in El Paso, Texas; the Tree of Life Synagogue in Pittsburgh; Emanuel African Methodist Episcopal Church in Charleston, South Carolina, and the Pulse nightclub in Orlando.

Biden had condemned the shooting in Buffalo in a statement on Saturday nght.