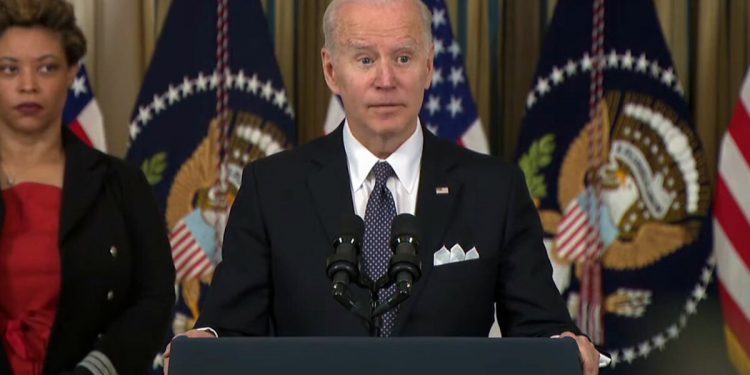 President Biden on Monday announced a budget blueprint that calls for higher taxes on the wealthy, lower federal deficits, more money for police and greater funding for education, public health and housing.

Appearing at the White House with his budget director, Shalanda Young, Biden said the proposal sends a clear message to the public about “what we value.” He outlined a focus on fiscal responsibility, safety, security and investments to “build a better America.”

The document essentially tries to tell voters what a diverse and, at times, fractured Democratic Party stands for ahead of the midterm elections that could decide whether Congress remains under the party’s control.

The bottom line: Biden is proposing a total of $5.8 trillion in federal spending in fiscal 2023, which begins in October — slightly less than what was projected to be spent this year before the supplemental spending bill was signed into law this month. The deficit would be $1.15 trillion.

There would be $795 billion for defense and $915 billion for domestic programs; the remaining balance would go to mandatory spending such as Social Security, Medicare, Medicaid and net interest on the national debt.

The higher taxes outlined Monday would raise $361 billion in revenue over 10 years and would apply to the top 0.01% of households. The proposal lists another $1.4 trillion in revenue raised over the next decade through other tax increases that are meant to preserve Biden’s pledge to not hike taxes on people earning less than $400,000.

The 156-page plan shows the splinters that persist in Biden’s coalition and the possible gaps between the promises of what is being offered and the realities of what emerges. Biden has backed many of these ideas previously, without necessarily getting a full buy-in from Congress.

The proposal includes a minimum 20% tax on the income of households worth $100 million or more, similar to a proposal Democrats in Congress began debating late last year in order to pay for Biden’s domestic spending plans. But those spending plans were put on hold after talks with Sen. Joe Manchin III (D-W.Va.) collapsed.

More money would go to support law enforcement, yet bipartisan efforts at police reform have failed. The budget assumes — with a high degree of uncertainty, based on forecasts made last November — that inflation, which is at a 40-year peak, gets back to normal next year.

“Budgets are statements of values,” Biden said in a statement, “and the budget I am releasing today sends a clear message that we value fiscal responsibility, safety and security at home and around the world, and the investments needed to continue our equitable growth and build a better America.”

It’s a midterm elections pitch to a nation still off balance from a chaotic few years caused by the pandemic, an economic recession, a recovery, challenges to U.S. democracy and war in Ukraine. The Biden budget foresees cutting annual deficits by more than $1 trillion over the next decade. Those reductions would occur in large part through higher taxes and the expiration of relief spending tied to the coronavirus outbreak that began in 2020.

But like most presidential budgets, it’s a proposal and a set of ideals, rather than law. Congress is responsible for implementing the budget through tax and spending legislation and annual agency funding.

The proposal faced immediate criticism from Republican lawmakers. They noted that annual deficits well in excess of $1 trillion would persist, said higher taxes could hurt growth and objected that additional government spending would feed into inflation.

“What this budget shows is that President Biden values more spending, more debt, more taxes and more pain for the American people,” said Rep. Jason Smith of Missouri, the top Republican on the House Budget Committee.

On the tax front, it’s unclear how Biden would get his policies through Congress. He had previously negotiated down the proposed 28% corporate tax rate, and his new minimum tax on the ultrawealthy would include “unrealized gains,” which are potential profits that exist on paper because the underlying asset has yet to be sold.

The result is that the special tax on people worth more than $100 million is unlikely to become law soon, said John Gimigliano, head of federal legislative and regulatory services at KPMG.

“That is kind of like a slow-burn proposal, like, let’s continue to have this conversation over months or maybe years,” Gimigliano said.

While the budget would elevate funding for education and public health and provide $48 billion to increase the supply of affordable housing, it fails to spell out what the broader successor to Biden’s stalled “Build Back Better” agenda would be. That proposal from last year included money for child care, preschool, clean energy and lower healthcare premiums, but it was blocked by Manchin, the decisive Democratic vote.

Young told reporters the blueprint does not include line items tied to that possible bill because “discussions with Congress are ongoing.” But the budget plan includes a “deficit-neutral reserve fund” to account for a possible agreement being reached.

Undergirding the plan is a forecast that the economy will return to normal next year after the unprecedented spending tied to the pandemic and inflation. The budget forecasts 4.7% inflation this year and 2.3% in 2023, which would be down from 7% in 2021. Yet prices kept climbing in the first two months of 2022, and Russia’s invasion of Ukraine pushed oil, gasoline and natural gas higher, in ways that could spread across the economy.

Cecilia Rouse, chair of the White House Council of Economic Advisors, said the administration expects “the economy to normalize” as the country works through the pandemic, supply-chain pressures ease and the “extraordinary measures” of support tied to the coronavirus roll off the budget. That normalization would include inflation falling back to typical levels, “but there’s tremendous uncertainty,” Rouse said.