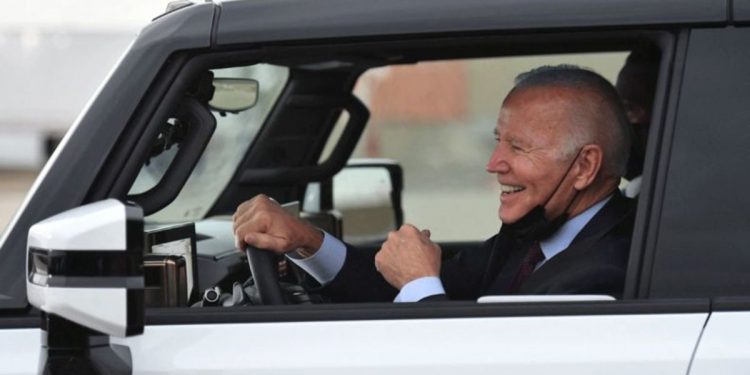 
The aggressive fuel-economy regulations the Biden administration rolled out last week are intended to spur faster development of electric cars, but they rely on a credit program that some environmentalists say undercuts the program’s pollution-fighting purpose.

The system allows carmakers to claim an equivalent of more than 100 miles per gallon for each EV in their lineup, potentially allowing them to meet the 49 mpg fleetwide mandate by 2026 even if the rest of the lineup is crowded with internal combustion vehicles.

“Automakers have delighted in a system that allows them to evade the rules with generous credits they can buy from other companies or create themselves that allows them to avoid meeting stricter requirements,” said Dan Becker, director of the Center for Biological Diversity’s Safe Climate Transport Campaign.

Under the updated regulations, carmakers will be required to raise the average fuel efficiency of their fleets 8 percent annually for the 2024 and 2025 model years, and 10 percent for 2026. By the 2026 model year, the average will have to be 49 mpg under the agency’s testing regime, though actual results for motorists will likely be closer to 39 or 40 mpg.

That seems like a steep climb for an industry that now averages slightly more than 25 mpg. Manufacturers that fail to meet the requirements face fines.

But automakers get extra credit for each model of hybrid or electric vehicle in their lineup regardless of how many they sell. The mileage is expressed using an equivalence, giving hybrids or electric cars a much higher miles-per-gallon calculation for the purposes of the regulation, greatly boosting a company’s average. The equivalency rate is slightly lower for hybrids.

Tesla Inc.’s electric Model 3, for example, is rated at the equivalent of 134 mpg for purposes of the fuel economy standards. Tesla, the world’s biggest maker of electric vehicles, had a fleetwide average equivalent of 119 mpg in 2020, the most recent figures available. The automaker with the next highest average was Honda, with 29.1 mpg.

Automakers without enough EVs in their lineup are also allowed to purchase credits from other companies with better average mileage, something that gave a boost to Tesla during its early years.

The new regulations, a reversal from President Donald Trump’s policies, were released by the National Highway Traffic Safety Administration and won applause from many groups concerned with climate change.

“The stringency of the standards demonstrates NHTSA’s commitment to climate ambition and reflects the momentum of the market toward a zero-emissions future,” Nathaniel Keohane, president of the Center for Climate and Energy Solutions, said in a statement.

But many environmentalists have objected to the credit system, which has been part of the mileage program since the Obama administration.

“These rules send a signal to sell more electric vehicles,” Luke Tonachel, director for clean vehicles and fuels at the Natural Resources Defense Council, said in a statement. “But stronger standards will be necessary to ensure the full transition off gasoline and oil.”

U.S. Transportation Secretary Pete Buttigieg said in announcing the standards Friday that they are “a big step and part of an all-of-the-above strategy by the Biden-Harris administration to accelerate our path to cleaner energy and electric vehicles and lower the cost that American families pay each month.”

A major trade group for automakers gave the plan tentative support but said the U.S. government will have to do much more to reach Biden’s ambitious goal of having a half of all vehicles sold in the U.S. to be capable of emissions-free driving by the end of the decade.

John Bozzella, president of the Alliance for Automotive Innovation, attended the announcement in Washington and told reporters that reaching Biden’s goal is going to take a comprehensive national policy that includes “significant private sector engagement, everything from more EV charging infrastructure, clean power, building codes — both residential and commercial — that are EV ready, as well as government policy.”

The alliance, which represents companies such as Ford, General Motors, Stellantis, Honda and Toyota has generally supported the administration’s efforts to require higher fuel economy and limit greenhouse house gas tailpipe emissions from cars. The group says the government has to invest more in building charging stations and offering tax credits to consumers to spur adoption of electric cars, however.

Russian Teachers Punished for Anti-War Remarks As Students Report Them

Russian Teachers Punished for Anti-War Remarks As Students Report Them