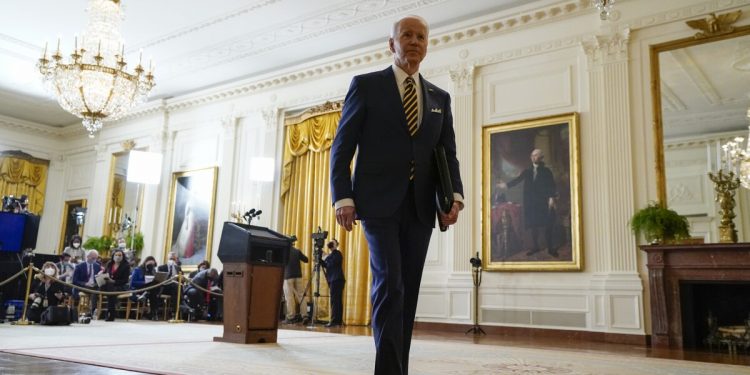 The White House on Thursday sought to clarify remarks by President Biden about the consequences of a “minor incursion” by Russia into Ukraine that appeared to undermine weeks of intense U.S.-led diplomacy aimed at stopping an invasion of the former Soviet republic.

Officials in Kyiv reacted angrily to Biden’s comments at a news conference Wednesday in which he appeared to wobble on backing Ukraine if it were attacked by its larger neighbor. An array of U.S. lawmakers and world leaders also expressed dismay at Biden’s comments, with some saying the president appeared to offer his Russian counterpart a green light to launch a limited invasion.

The White House and Western leaders spent Thursday trying to clean up the damage, with Biden telling reporters he has been “absolutely clear with President Putin. He has no misunderstanding. If any — any — assembled Russian units move across the Ukrainian border, that is an invasion … It would be met with severe and coordinated economic response.”

British Prime Minister Boris Johnson said in London that “any kind of incursion into Ukraine, on any scale whatever, would be a disaster, not just for Ukraine, but for Russia.” And NATO Secretary General Jens Stoltenberg on CNN called for “Russia not to use military force against Ukraine,” saying Biden’s comments were not an invitation for invasion.

The president of besieged Ukraine, meanwhile, insisted that even a “minor” incursion into his country would be catastrophic.

“We want to remind the great powers that there are no minor incursions and small nations,” Volodymyr Zelesnky said in Kyiv. “Just as there are no minor casualties and little grief from the loss of loved ones.” His foreign minister, Dmytro Kuleba, said a “minor invasion” would be like being “half-aggressive,” an illogical distinction.

Biden’s comments came during a nearly two-hour news conference at the White House when he suggested U.S. allies were not aligned in how to confront Moscow’s aggression. Tens of thousands of Russian troops are amassed at the Ukraine border, and top U.S. officials expect them to invade at any moment. Russian President Vladimir Putin has issued a series of ultimatums that Western governments are not willing to meet.

Biden told reporters Wednesday that “my guess is he will move in. He has to do something,” as he revealed tensions within the U.S.-European alliance about how to handle various scenarios involving Ukraine. “It’s one thing if it’s a minor incursion and then we end up having a fight about what to do and not do,” he said, adding “there are differences in NATO as to what countries are willing to do depending on what happens.”

Sen. Jeanne Shaheen (D-N.H.), who went to Kyiv this week as part of a U.S. congressional delegation, said Thursday in a telephone conference with reporters in Washington that Biden “misspoke.”

Shaheen and a bipartisan group of lawmakers on Thursday introduced legislation that would make it easier for European countries to transfer weapons provided by the U.S. to Ukraine. As it stands, the U.S. technically provides only “defensive” armaments to Kyiv and not the offensive materiel it seeks. Ukraine would like to obtain Patriot missile batteries and other air-defense systems to help counter Russian airpower.

It was unclear if Biden, in fact, misspoke on Wednesday, or if he was reflecting the unease and resistance he is hearing from Europe. Despite efforts by the administration — led by Secretary of State Antony J. Blinken — and top officials at NATO and the European Union to project a united front in confronting Moscow, the reality is that many of the United States’ transatlantic allies are less willing to unleash total fury against Moscow.

Many have extensive financial and trade ties with Russia. If, for example, the sanctions that Washington is threatening to slap on Putin’s government were to include barring it from international banking transfer systems, scores of European companies would suffer.

Biden has probably heard European misgivings in private, but few would have expected him to allude to them publicly, especially as he noted that one of Putin’s objectives is to weaken and sow division within NATO and that Moscow would be held accountable if it invaded.

The timing of Biden’s comments could not have been worse from the perspective of international diplomacy. They came as Blinken was marching through a series of intense talks with leaders of Ukraine in Kyiv; other Europeans in Berlin, and, on Friday, a one-on-one with his Russian counterpart, Sergei Lavrov, in Geneva.

A similar marathon was conducted last week by Blinken’s deputy, Wendy R. Sherman, who met with Europeans, Russians and NATO officials. No progress was reported, although both Russian and the Western officials seemed to want to show they were attempting dialogue. Moscow, however, has refused to back down from its principal demand — an agreement by the U.S. and other member states to keep Ukraine out of NATO. The U.S. and NATO have refused to comply and insist that global security and international law would be harmed if they ceded to the Kremlin’s demands. They also say not forcefully pushing back on any Russian invasion would send a terrible message.

“If Russia invades and occupies Ukraine, what’s next?” Blinken said in Berlin. ” Certainly, Russia’s efforts to turn its neighbors into puppet states, control their activities, and crack down on any spark of democratic expression will intensify.”

“Once the principles of sovereignty and self-determination are thrown out, you revert to a world in which the rules we’ve shaped together over decades erode,” he added.

Hoping to bolster its position, the administration announced on Thursday a new set of sanctions against four Russian nationals it accused of working to destabilize the Ukrainian government. Blinken said Russian intelligence services are using “hybrid” tactics, including cyberespionage and the recruitment of Ukrainians to infiltrate sensitive Ukrainian agencies, to undermine that country’s unity and advance Russian interests.

Robert O’Brien, who served as national security advisor under Trump, said that for sanctions to work they must target Putin and his inner circle of oligarchs. “We ought to seize the soccer teams of his oligarchs and their yachts overseas and let them litigate for years to try and get those back,” O’Brien told Hugh Hewitt, a conservative radio host.

O’Brien said Biden’s comments on Wednesday were a “major mistake” that needs to be fixed.

“I think the White House is trying to walk it back so it’s not viewed as a green light for Putin to send his little green men or engage in cyberattacks, or even engage in limited conventional attacks against Ukraine,” O’Brien said. “That would be a disaster. And I don’t think that’s what the White House wanted.”