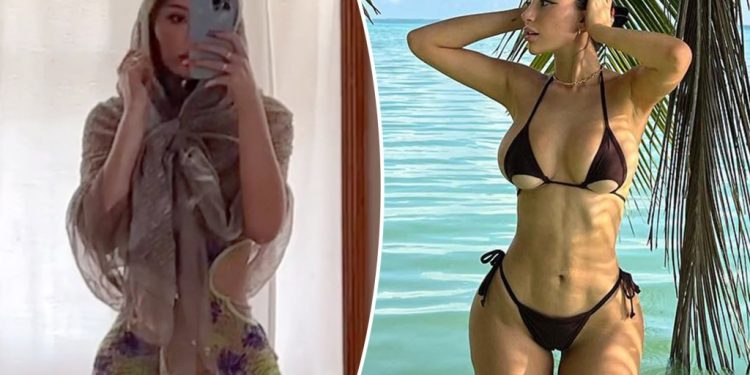 
A scantily clad Australian influencer was reportedly asked to “cover up” while vacationing on the beaches of a mostly Muslim island.

Mikaela Testa, 22, is adored for her hourglass figure that she shows off to her 1.6 million TikTok and 136,000 Instagram followers, posing in micro bikinis.

And while they may be big fans of her cheeky outfits, the locals on Cocos Island were not.

“So I landed in Cocos yesterday and the lady who owns the Airbnb that we’re staying in received some calls from some locals saying I should be wearing something more culturally appropriate because this island is predominantly Muslim,” the TikTok vlogger shared.

“So today I am covering up to show some respect, and I respect their wishes 100 percent.”

Testa and her fellow TikTok star and boyfriend Atis Paul are currently vacationing on Cocos Island is an Australian territory midway between Australia and Sri Lanka. The small island was recorded as being 75% Muslim, according to the 2016 census.

As Testa explains the situation to her viewers in her daily vlog, she is seen wearing a brown scarf covering her head and shoulders and a skin-tight maxi-dress.

In Muslim culture, it is often custom for women to be required or choose to cover everything but their hands, face and feet in public.

Testa did not appear to give any pushback to the locals’ requests but some still commented on her posts, claiming she did not do enough — with some noting that her dress was skin-tight and had cutouts that highlighted her hips and cleavage.

However, most of her followers appeared to appreciate her attempt to cover up and appease the locals.

“Why ppl hating so hard esp ppl who aren’t even Muslim? I’m Muslim and thought it was really respectful of her to cover up the best she can!” a TikTok user named Saba posted.

“At least she’s trying to show respect. She clearly isn’t fully aware of everything in the culture but she’s making an effort to respect locals,” a commenter noted, while another wrote, “Thank you so much for showing respect.“

“I love how u respected their wishes and covered up the best you could. as a muslim myself thank you,” one supporter weighed in.

This isn’t the first time Testa has come under fire for her social media posts. Testa drew a lot of criticism in 2019 when she released a teary video — which went viral — protesting Instagram’s decision to cease showing “likes.”