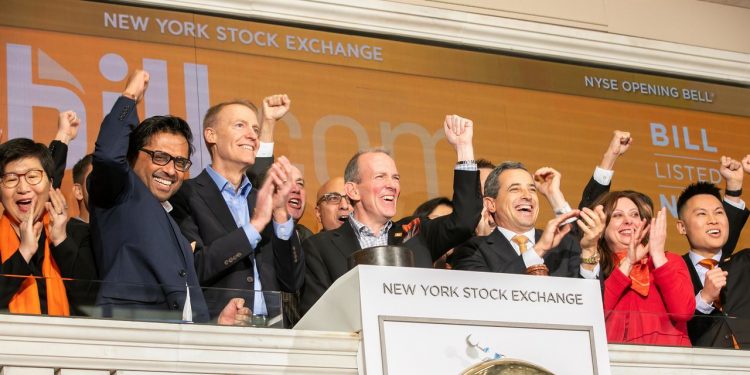 
Shares of Bill.com Holdings Inc. rocketed more than 30% higher in after-hours trading Thursday after the maker of financial software tools for small businesses topped expectations for its latest quarter and gave an upbeat forecast.

After adjusting for stock-based compensation and other expenses, Bill.com
BILL,

recorded a net loss of $220,000, translating to roughly breakeven performance on a per-share basis. A year prior, the company reported an adjusted net loss per share of 1 cent.

The FactSet consensus was for an adjusted net loss of 18 cents a share.

Bill.com’s revenue grew to $156.5 million from $54.0 million a year prior, while analysts tracked by FactSet were projecting $131.1 million.

The company processed $56.4 billion in total payment volume during the quarter, ahead of the $50.6 billion that analysts tracked by FactSet were projecting. Bill.com grew TPV by 20% sequentially, above the roughly 13% sequential growth rate that Bill.com saw in its September quarter.

“This was arguably the biggest question for investors heading into the print given concerns around the health of SMBs [small and medium-sized businesses], some industry data points, and considering management had guided to less of a seasonal spike than occurred in the same quarter one year prior,” wrote Wolfe Research analyst Darrin Peller, who called the report “excellent.”

The earnings come amid a rough recent stretch for shares of Bill.com and other fast-growing fintech names. Through Thursday’s close, Bill.com’s share price had been cut roughly in half from a closing high of $342.26 achieved in November. The stock registered a nearly 8% decline in Thursday’s regular session.

Batwoman: Inside the Broken Toys Ending That Changes the Series

Batwoman: Inside the Broken Toys Ending That Changes the Series