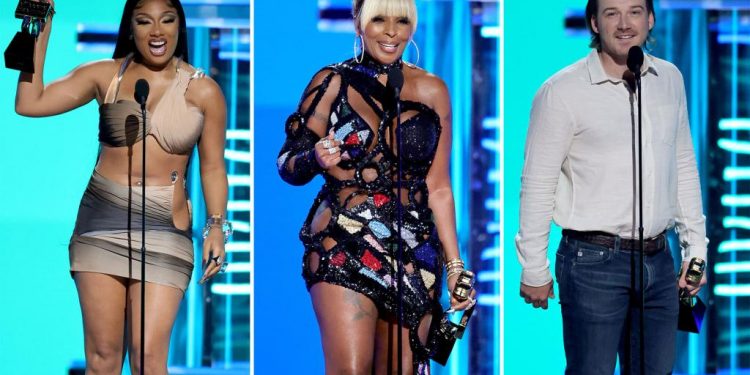 The 2022 Billboard Music Awards kicked off without a hitch Sunday night, May 15 live from the MGM Grand Garden Arena in Las, Vegas with Sean “Diddy” Combs hosting the 29th edition of the show.

Just days after announcing his new R&B label Love Records and a new album with Motown Records, the 52-year-old executive started the show with a performance of his brand-new single “Gotta Move On” featuring Bryson Tiller as well as “First Class” with Jack Harlow and “Mo Money, Mo Problems” with son Christian King Combs and Teyana Taylor.

The Weeknd led the pack of nominees with 17 nods. His duet “Save Your Tears (Remix)” with Ariana Grande was up for an impressive six nominations.

The 32-year-old’s future “After Hours Til Dawn” touring partner Doja Cat trailed right behind him with 14 nominations.

Justin Bieber, Kanye West, and Olivia Rodrigo were all up for 13 nominations each.

Drake had 11 chances at a trophy in some of the nights biggest categories including top artist, top male artist, top Billboard 200 artist and top Hot 100 artist and he was Drake was also up in the Billboard 200 album category for “Certified Lover Boy.” Dua Lipa and Ed Sheeran trailed closely behind him with nine nominations each.

Keep tabs on the 2022 Billboard Music Awards winners in The Post’s live blog below, which will be updated throughout the night.

What you need to know: