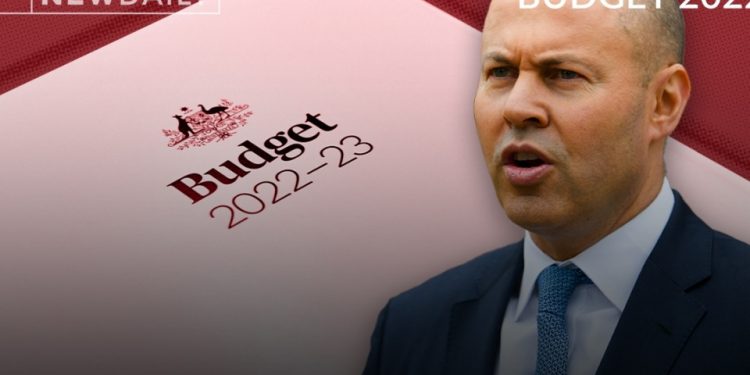 
Treasurer Josh Frydenberg will spend billions on middle-class welfare in a pre-election budget he has framed to promise voters a share in Australia’s surging post-pandemic economy.

Pre-budget speculation abounded about how Mr Frydenberg would balance economic management against the temptation to offer voters cost-of-living giveaways before the May election.

But his most striking policy announcement had not been expected at all: a major expansion to a tax offset that will now allow people in ten million Australian households on up to $125,000 a year to get a $1500 tax refund. The total program will cost $12 billion.

“Events abroad are pushing up the cost of living at home,” the Treasurer told parliament on Tuesday evening.

He said the government’s budget package would offer “targeted and responsible” packages to ease the pressure of rising fuel, food and shipping costs.

But the other measures were not as eye-catching.

For pensioners, people on welfare and veterans, the government found an additional $1.5 billion to cover one-off $250 payments to help them with rising prices.

And the government confirmed it would cut fuel taxes by 20 cents a litre for six months in response to soaring energy prices caused by war in Ukraine; after clawing back billions in taxation credits, though, it will cost only $3 billion.

Mr Frydenberg was in a chipper mood in the halls of Parliament on Tuesday, shortly before a budget speech that rejoiced in the renewed strength of Australia’s economy.

Unemployment was forecast to drop to 3.75 per cent in the September quarter, a fifty-year low, while a booming local economy and international demand for commodities delivered a sudden budget windfall that dropped the deficit to $78 billion, or $20 billion less than was forecast in just December.

GDP is forecast to grow at 3.5 per cent next financial year and the gross national debt, incurred during the pandemic will peak four years earlier than expected.

Boasting of a nation in with “more people in work and fewer in welfare’ Mr Frydenberg was quick to attribute credit for the resurgence to government policy – and said the new budget platform would compound these successes.

“We have overcome the biggest economic shock since the Great Depression,” he said.

After two years after record spending and what appeared to be a classically left-wing approach to spending one’s way out of crisis, Mr Frydenberg stressed that Liberal party orthodoxy was returning.

“We have drawn clear lines. Banking the dividend of a stronger economy [and] ending economy wide emergency support,” he said.

But his upbeat address seemed only to underscore those points made by critics who warned against delivering generous election handouts when the economy was performing so strongly and facing possible rate rises.

By the government’s own estimate, businesses and households have respectively saved an additional $182 billion and $251 billion since the pandemic first struck.

Public attention will naturally centre on the handouts. But there was serious policy unveiled too.

At a cost of nearly $10 billion over a decade the government will make its greatest ever investment in Australia’s intelligence and interception capabilities through the electronic espionage agency the Australian Signals Directorate.

That decision will likely carry significant implications for geostrategic competition in the Pacific. In addition to recent concerns about the possible acquisition of a military base by China in the Solomon Islands, the United States military has announced its intention to build a new remote base “east of the Philippines” solely for cyberwarfare

New rail and road infrastructure will be built in critical regional areas at a cost of $17.9 billion.

After a year in which conditions in the nation’s aged care services was exposed by the pandemic, the government also found an additional $468 million to improve quality in the sector.

This is a fraction of the $17.7 billion it spent after a scathing Royal Commission the year prior and far short of the amount critics say would be needed to realise the inquiry’s main recommendations.

No extra money was offered to aged care workers despite pleas from the sector to address shortages that had left homes understaffed during the pandemic. But more than $340 million will be dedicated to improving medication management for the elderly.

The government is seeking to capitalise on plunging unemployment by making a centrepiece of a program that would spend $2.8 billion on increasing training for apprentices and providing rewards to small businesses that invested in digital skills.

But taken together the budget’s policy announcements did not seem to amount to a new or coherent chapter in Australian history.

Renewable energy funding will drop by 15.4 per cent in real terms through to 2025-2025, a drop the government says that accounts for initial establishment expenses for the Australian Renewable Energy Association.

Expenses for programs promoting Australian mining, manufacturing and construction industries will grow by more than 7 per cent and top $4 billion.

There will be, however, an additional $1 billion to protect the health of the Great Barrier Reef.

In many sections the budget almost appeared to be self-managing, as the government’s financial obligations fell before their eyes. Spending on social security payments will fall by $5.3 billion over five years, budget papers estimate, due to a better labour market.

Perhaps the simplest boost to Mr Frydenberg’s bona fides as an economic conservative was the sharp and sudden drop in Covid stimulus payments.

In cash terms, government spending dropped by five per cent this budget, mostly due to Covid initiatives being scrapped.

But as a proportion of GDP expenditure remains at 27.3 per cent, which economists such as Chris Richardson have said only looks impressive in comparison to recent years. Net debt is also scheduled to peak at $864 billion in 2025-26, albeit earlier than expected.

Earlier this month Mr Frydenberg gave a landmark pre-budget speech in which he declared the first fiscal pandemic was now over, with Australia safely through the other side.

“That now enables us to transition to the second phase of our fiscal strategy,” he said.

But when it came down to it the Treasurer seemed to be a man more preoccupied by the afterglow than what might follow.