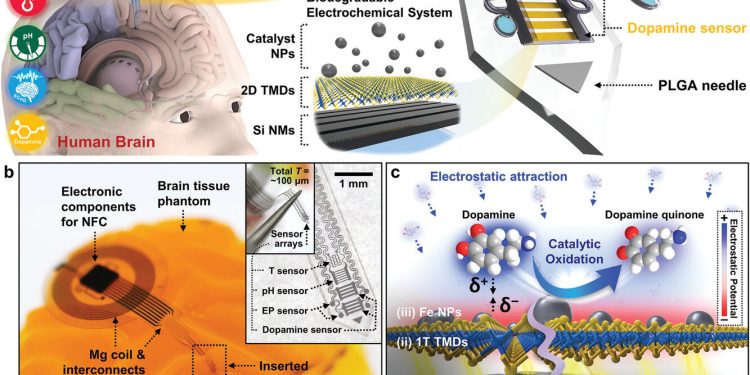 
A wireless, biodegradable sensor could offer doctors a way to monitor changes in brain chemistry without requiring a second operation to remove the implant, according to an international team of researchers.

In a minimally invasive procedure on mice, the researchers inserted a wireless, biodegradable device into the deep brain region of a mouse. The device collected data on levels of dopamine, an important neurotransmitter, and other properties of the brain, such as pH levels, temperature and electrophysiology before harmlessly dissolving back into the body.

Because dopamine is critical in many neural-related conditions, a biodegradable sensor to detect the neurotransmitter could be used by doctors for a range of treatments and operations.

“The direct measurement of dopamine can be very significant because of the role that neurotransmitters play in a lot of neural related disease,” said Larry Cheng, the Dorothy Quiggle Professor in Engineering and an associate of the Institute for Computational and Data Sciences.

“I think people in the past have been looking at a lot of the other parameters in form of temperature, or fever, or sweating, among others. These related parameters can be very helpful when we don’t have the direct measurement, but if we can have the direct measurement of this neurotransmitter at the target location, and in real time, that can be certainly more direct and even more helpful, because information can sometimes be very challenging to infer based on those other parameters.”

The silicon-based implant includes a semiconductor called two-dimensional transition metal dichalcogenides, or TMDCs, which are considered an emerging class of materials increasingly used in nanoelectronics and nanophotonics applications. The ability for these atomically thin TMDCs to be manipulated allowed the scientists to design the implant to be biodegradable yet maintain electrical and electrochemical performance.

To make this implantable, all of this equipment must be packed into a probe that measured about 13 or 14 millimeters long, said Cheng. For perspective, the diameter of a regular strength aspirin is about 14 millimeters.

“That’s really for the entire device, but, if we’re talking about the sensor, itself, that is even smaller,” said Cheng, who is also a member of the Materials Research Institute.

The team then tested the device by inserting the probe in a section of the mouse’s brain called the basal ganglia.

In a clinical setting, Cheng said patients would wear a headband or other type of apparatus to relay the implant’s signals to equipment that the medical staff could the use to monitor the patients’ condition.

According to the researchers, the main benefit of a biodegradable device is that it would require no further surgeries —which add risks to recovery—to remove the device.

“Currently, after full recovery, the device has to be removed, or there will be just something inside we don’t need to use,” said Cheng. “So that’s why here, the device is designed to be biodegradable and after a certain amount of time and after it has fulfilled its function, it can safely dissolve. So, the patient won’t need to have go through the second surgery operation to remove the device.”

The sheer number of chemicals, materials and designs that could be used to make this device required advanced computing techniques, according to Cheng. He added that computers were used to simulate different chemicals and bioengineering schemes to find the ideal materials and design to detect and measure the target molecule, in this case, dopamine.

Ultimately, the team hopes that the device will be used to help human patients, but they expect that an immediate need might be for doctors who are engaged in animal studies.

“Some of the potential treatment options may first be available in animal studies where the implant could help scientists initially evaluate how a disease progresses, how a patient recovers from a treatment and how effective that treatment is,” said Cheng. “So, the implant can be very helpful to simply use in an animal model to better investigate these questions.”

Future work could be aimed at creating a sensor that monitors other aspects of brain chemistry, beyond dopamine detection, Cheng said.

The researchers reported on their findings in a recent issue of Advanced Materials.