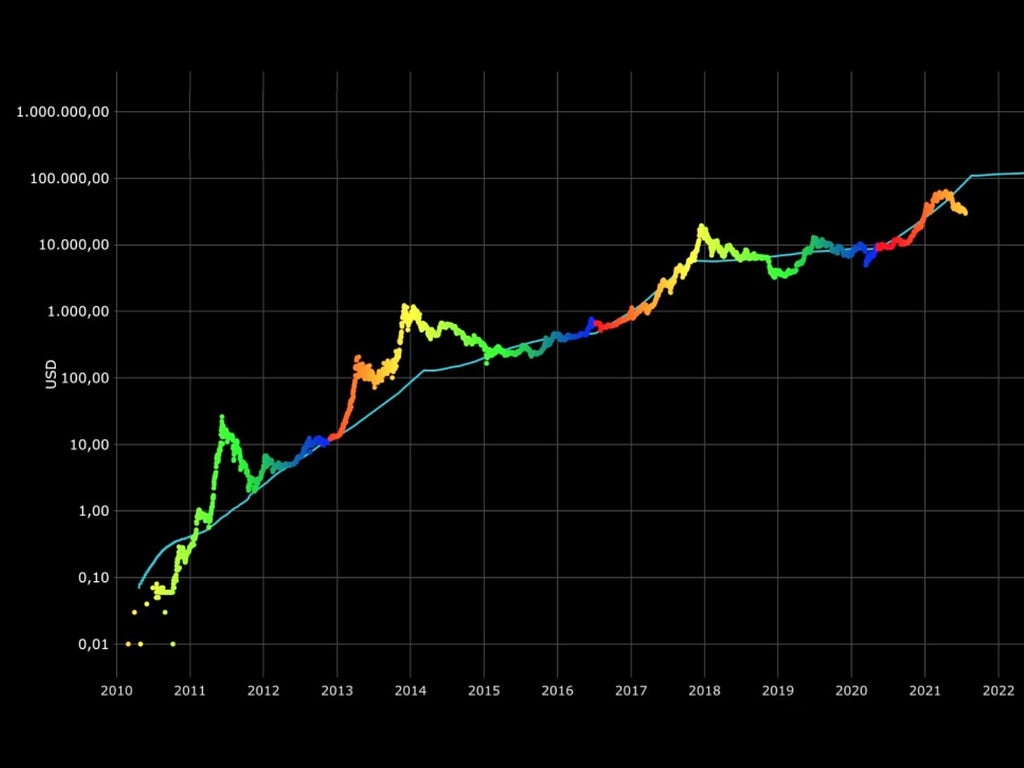 A prominent bitcoin price model that accurately predicted the 2020/21 bull rally remains “intact”, according to its creator, despite the cryptocurrency failing to reach its December 2021 target of $100,000.

The stock-to-flow (S2F) model, created by pseudonymous Dutch analyst PlanB, posits that long-term market movements are dictated by bitcoin’s inbuilt scarcity. Only 21 million bitcoins will ever exist and the rewards for mining the cryptocurrency – the process by which bitcoin is brought into existence – are halved roughly every four years.

By dividing bitcoin’s supply (stock) with its production (flow), the S2F model forecasts that the cryptocurrency will see increasingly higher all-time price peaks midway through each four year cycle – a pattern that was followed in 2013, 2017 and 2021.

Bitcoin hit a new all-time high close to $69,000 in November, more than three-times higher than its 2017 peak, but has since dropped back down and is now hovering around $50,000. This is way off PlanB’s six figure prediction, but the analyst claims the current price still remains within the lower bands of the projected S2F range and could see new highs in 2022.

“Key is that BTC $51k is still within one standard deviation band of S2F model (roughly $50k-$200k),” PlanB wrote on Twitter. “If BTC stays within 1sd band for the next 2.5 years, then S2F model is still valid and indeed useful for me.

“It was not wise to give a point estimate and [I] should have stayed with the range estimate. But I guess that’s what some don’t understand: spot on 100k would have been nice but within 50-200k range is all OK.”

The precision of PlanB’s forecasts over the last 18 months have gained him more than 1.5 million followers on Twitter during that time, though some appear to be questioning whether the failure to see spectacular gains in the final months of 2021 mean the S2F model is no longer valid.

“You know a model is not good when you need to make three-to-four more models if it fails,” one wrote in response to PlanB’s justification that S2F is a range prediction, not a point estimate. Another of his followers shared a gif of goalposts being moved.

Several crypto market experts contacted by The Independent recently predicted that bitcoin is on course to reach and surpass $100,000 in 2022, given growing mainstream adoption and increasing institutional investment in the cryptocurrency.

Others warned that economic uncertainty brought about by the latest surge in Covid cases and subsequent restrictions could see the price of bitcoin continue to languish in the new year.

“The early parts of 2022 might see cryptos struggle amid concerns about the overall macroeconomic backdrop, with Covid-related uncertainty and inflation both remaining high, and central banks not sure whether to be aggressive in tacking inflation or remain patient,” said Alexey Kirienko, CEO of investment firm Exante.

PlanB has consistently warned that geopolitical crises and other so-called black swan events could derail his S2F model.

“All these forecasts can be destroyed by a black swan event,” he told The Independent in September. “Like [a] bitcoin ban, Covid escalation [or] war with China.”