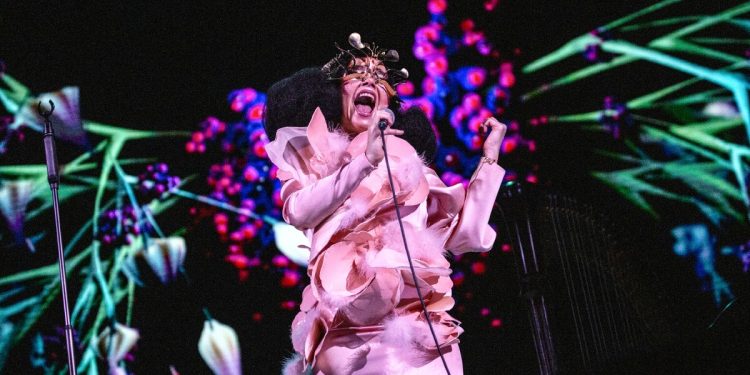 
Despite more than two years of being anchored with family in Iceland and nearly as long without looming artistic deadlines, Björk sounded a little out of breath during a recent phone conversation from Reykjavik. She was on a walk outside during a break at the studio where she was putting final touches on her forthcoming 10th studio album. Not long after, she would travel outside Iceland for the first time since the beginning of the COVID-19 pandemic. On Wednesday, her Cornucopia tour makes its L.A. premiere, the first of three nights at the Shrine Auditorium.

A few days before, the 56-year-old musician had missed a scheduled call because of an abrupt change of plans brought on by — what else? — creating her album during the pandemic. “Some people I was working on it with got COVID,” she said. “So we have to juggle all the plans around, because I’m trying to finish my new album before I go to California.”

That album will be her first since “Utopia” in 2017. It’s part of a discography that across 30 years has earned her worldwide fame and legions of devoted fans — even as she’s roamed further afield of popular music’s center and pushed her sound away from standard structures.

Possessing an immediately identifiable voice and an eagerness to harness every facet of it, the artist born Björk Guðmundsdóttir has, since her rise in the late-’80s post-punk band the Sugarcubes and her first solo album, “Debut,” in 1991, explored dance-pop, trip-hop, experimental electronic music and string-driven minimalism, along the way combining it into a body of work that’s uniquely Björkian.

Björk debuted Cornucopia, which she directed with Argentine film auteur Lucrecia Martel, in 2019 at the Shed in New York. For the show, which is based on ideas and visual cues presented in “Utopia,” Björk brought on Tobias Gremmler, an influential multimedia artist, to collaborate with stage designer Chiara Stephenson. Crucially, they teamed with cutting-edge sound designers to create a 360-degree sonic environment.

While in the U.S., Björk will perform two Cornucopia dates in San Francisco (Feb. 5-6) before flying to Miami for two mid-February performances of Björk Orchestral, billed as “an intimate tour featuring Björk’s orchestral arrangements.” Later this year, Björk will appear in a major motion picture for the first time since her 2000 performance in controversial director Lars von Trier’s “Dancer in the Dark.” She plays a character called the Seeress in “The Northman,” an upcoming historical drama starring Alexander Skarsgård, Nicole Kidman and Anya Taylor-Joy.

Our conversation occurred in mid-January, as the Omicron variant was disrupting global air traffic, casting doubt — since allayed — on the concerts. “Fingers crossed,” she said. “We’ll see what happens.”

Given the worldwide surge in COVID cases brought on by the Omicron variant, did you have any hesitations about resuming your Cornucopia tour?
Since everybody has to be two or three times vaccinated, I’m going to put it in the hands of your government. But on my side of things, I should at least give it my best shot. I did concerts in the autumn in Iceland that got postponed seven times. When we finally did them, it was an out-of-body experience for all of us. And I was very relaxed because the ticket-owners basically had to renew their tickets seven times. I feel a certain obligation to that. I also feel that during COVID, people have been suffering. And when it comes to music and concerts, it was mind-blowing to see how essential the experience is for the human condition. It was very powerful to be able to do that together.

During your forced break, were there rituals or new routines that helped ground you?
I enjoyed some good parties during the moments that had the most restrictions. We would have our dinner party and then at the end of it we would dance like a crazy person for an hour on top of the sofa and still be in bed at 11. I kind of like that. I think that’s my ideal lifestyle.

Word on the internet is that the album you’ve been working on has tracks for the dance floor.
I am just finishing the album now, so it will definitely come out this year. The description that a song starts slowly, and then at the last minute you can dance like a crazy person to it, is probably a description that would fit most of the songs. I like music that starts out quite calm and somber, and you get this … I don’t know … narration and this sort of folk acoustic element in the songs. I do like a bit of dancing, so in the last couple of minutes of each song, you can have fun and go for it.

When they were in isolation in COVID, most people in the world were merging together [dinner], the bar and the disco, and it’s in your living room. And also, it happened between the generations. It’s still like that in Iceland. When I go to the big cities, I feel like the generations are quite separated.

The generations feel very separate, socially, in Los Angeles.
In Iceland, if you go to certain concerts and bars, you will get all the generations drinking together or partying together. But Reykjavik is only about 150,000 people. If you’re going to look for alternative electronic music, or if you’re into heavy metal, the 100 people who are into that are going to be from all generations.

This year marks your return to acting with your performance in “The Northman.” What drew you to this role and why now?
I sort of did it as a favor for a friend. It’s not really my thing; I’ve been blessed with some offers through the years, but I’m more a musician than an actress. I’m in the film for like 30 seconds — it’s more a guest appearance. But it was really fun, and [screenwriter] Sjón is such a genius when it comes to historical accuracy. He comes from a real world of archaeology and anthropology, so he’s quite authentic in how he approaches historical things.

The Los Angeles concerts will be your first outside of Iceland in more than two years. What’s it like to think about returning after such a disruption?
I’m actually enjoying it because with musicians, it can get a bit linear. You record and then you tour and then record and then tour. It’s refreshing to break that up a little bit. The only thing that I felt I might change with the Cornucopia show is that there are two manifestos, one by me and one by [Swedish environmental activist] Greta Thunberg, that are now three years old. But they’re even more relevant now.

One thing we’ve seen in the pandemic is that if governments want to act quickly, they can. After witnessing the climate accord negotiations in Scotland a few months ago — which Greta called “blah blah blah” in a comment after — I think the two manifestos in the Cornucopia show are even more relevant now. We need to take action now, and we need to have the same emergency in our environmental actions as how we reacted to the pandemic.

As someone who has long experimented with new technology, have you been following the rise of NFTs, the blockchain and notion of digital ownership, and if so, is that something you’re interested in exploring?
I’m definitely curious. I’ve never been sort of like, “Let’s do it just for the sake of doing new s—.” There are definitely things I’ve embraced. For example, touchscreens for “Biophilia” — it felt like it could really work. “Vulnicura” was perfect as a private opera in the VR screen. The isolation you experience when you have a VR set on your head actually suited it very well. We’ve taken that exhibition to 20 different cities, and people have been crying in their headsets, so that made me feel like it was a good experiment.

But I’m still deciding with this album. I’m still finishing the music side of it, so it’s not the best time for me to answer that question. Overall, though, like most people on the planet, I’ve been enjoying being at home and putting down roots and being visceral and tactile. It’s something that’s been moving me a little bit away from technology and more seeing the body and the seasons go by, a sort of close proximity to visceral things. But once I mix the album, I will move on to the visual side of things. Then I will see what looks tempting.