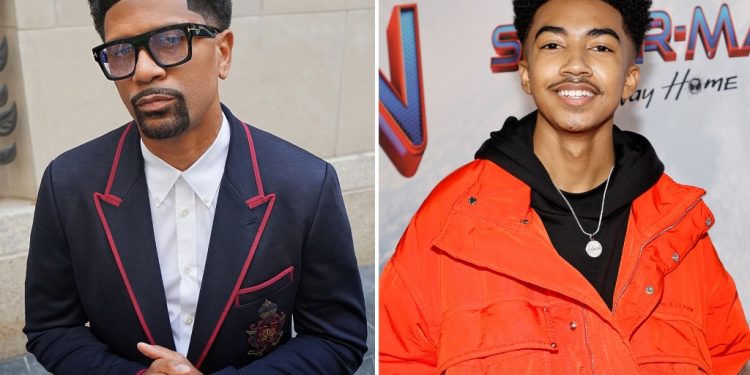 America watched this “Renaissance Man” guest grow up on their televisions and turn into a rapping, dancing and acting triple threat before our very eyes. But he informs me his hoops game is similar to Chris Paul, so we might have to turn that threat into a quadruple.

I’m talking about “Black-ish” star Miles Brown aka Baby Boogaloo. He was a fresh faced 9-year-old when he first appeared as Jack Johnson on the ABC hit, alongside actors Anthony Anderson, Tracee Ellis Ross and his television siblings Marcus Scribner, Yara Shahidi and Marsai Martin.

Now “Black-ish,” which is a show that I love, is airing its final season. And Miles is a 17-year-old poised to take on the entertainment world.

“It’s fun for me because I was able to grow up and have that experience with Marsai, and with Marcus and Yara, because they were all my age and we’re all doing the same thing, going through the same thing, feeling the same way,” he told me. “So it was like that backbone that we could always lean on, just like a regular sisters, regular brothers. So I think that was really fun. Now they’re all grown up. We’re all doing our own thing. We all succeeded in our own way.”

Miles said both Tracee and Anthony have also become surrogate parents off the set with Anthony even stepping in for tooth extractions.

“He’s definitely that father figure I have outside of my real family. So many times where he’s given me crazy advice or where he’s pulling out my teeth, when I got a loose tooth.”

But before “Black-ish,” he had an impressive resume for a little kid, heck even for a grown adult. His father is rapper Jack “Wildchild” Brown, who helped him develop an early appreciation for all types of dance and musical genres. And he had a knack for the dancing part, hence his nickname Baby Boogaloo. At 5, Miles competed on “America’s Got Talent” and danced on “Ellen.” He performed in a Chris Brown video and was rapping for legends as a tot: all pretty obvious signs Miles was built for the big time.

“I’ve known Big Daddy Kane. I performed for him. I think I was like 4-years-old when that happened. Same with Slick Rick,” he said casually.

Those early influences and connections came full circle when he released his debut rap album “We the Future” in 2020. And no big deal but he teamed up with Slick Rick, Big Daddy Kane, Method Man and Redman.

“My dad being who he is … I wanted to do something in music that has to do with spreading a message towards people my age. And I think that came from ‘Black-ish’ because ‘Black-ish’ is known for being that comedy show that is funny, but it’s also able to spread messages that a lot of other people don’t do,” he said. “And I think I kind of got the responsibility of putting messages in my own music … I’ve grown up listening to all these styles of music from my dad. I’ve had this knowledge from old school music to new school music, and I didn’t know the right way to blend both generations and blend both worlds into one style.”

“So I kind of wanted to go into a spreading a message to the youth, but bringing in, I guess, these OGs … these all respected rappers into it all together … I’ve always been around this rap scene just because my dad and I got to do my own thing and I’m able to bring them along. And they’re kind of fans of what I’m doing now,” he said.

As for his favorite rappers, he’s a big fan of Drake, Kendrick Lamar and, of course, his father.

Miles is a native of Los Angeles, a Lakers die-hard and credits LeBron with making him fall in love with the sport. It’s appropriate that on this season of “Black-ish” he lands a dream job as a locker room attendant for his beloved team and got to pal around with Dwight Howard, Rajon Rondo and DeAndre Jordan.

“Instead of watching them play basketball, they kind of had to deal with the challenges of being an actor and learning lines and memorizing the script. So I think that was a fun turnaround for them,” he said, adding that it’s also surreal for him to see his idols know who he is and appreciate his work.

I think it’d be cool if the team won another championship and Jack was able to get a ring. Though he reminded us his television alter ego is also into video games and STEM. Miles, who said his favorite celebrity guest was Michelle Obama, isn’t giving away any spoilers.

But as his show wraps up its run, Miles is looking ahead and has made no secret of his dream role: Miles Morales, the black Latino, Spiderman.

“I’m Afro-Latino, my name is Miles. I fit the age perfectly, fit the height, right? You know, so tell Marvel to hit me up, man,” he said.

Sounds like a match made in Marvel heaven to me.