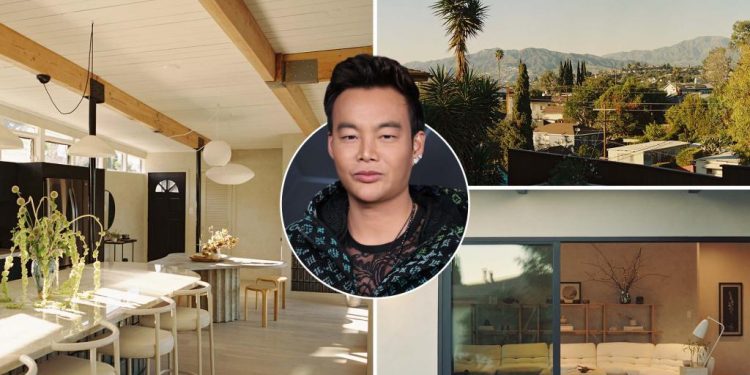 Stause is co-listing the house with Yonathan Baltazar of the Agency (the real estate empire founded by the husband of “Real Housewives of Beverly Hill’s” OG Kyle Richards). Enough name-dropping. Here’s the tea on the $1.88 million-dollar property.

Somehow a full remodel pays homage to the home’s mid-century roots while still accomplishing a sense of modernity.

In 1,516 square feet, there are three bedrooms and two bathrooms, all designed with Japanese and Scandinavian elements.

Who knew Scandanese was a thing? Anyway, the listing’s description promises a “peaceful life of ease and beauty.” Each room is light — the living room has floor-to-ceiling windows — airy and, like most newer homes in the City of Angels, 50 shades of white.

That said, the contemporary kitchen — complete with a sizeable island and breakfast bar — boasts LG matte black smart appliances. It’s also outfitted with boutique tiles and Brizo fixtures. Not familiar with Brizo? It’s the brand behind the $500 faucet and $200 towel rack. Still, that’s a drop in the bucket for Lim, who is reportedly worth $20 million.

“Kane and his real estate partner, Joel, head of OWIU, bought it for $932,000 over a year ago,” says Baltazar. “No one has been living in it, but we hope that the buyer who ends up with it is one that can appreciate timeless design and can find inspiration through every inch of the space.”

According to House Beautiful, Lim lives in a West Hollywood apartment he shares with his $360,000 collection of Christian Louboutins.

While 4115 Palmero Drive’s primary suite comes with built-in wardrobes and a double vanity, it’s modest as far as masters go.

Its biggest selling point is that it opens onto a deck overlooking a Japanese garden with bonsai trees clearly trimmed by someone with OCD.

The backyard lacks a pool or Jacuzzi. But it does have a fire pit with a wraparound custom wood bench perfect for hosting a hippy-dippy, kumbaya-fest.

Baltazar describes the perfect buyer as someone looking for “peace.”

There’s also a two-car garage. Although given the price of petrol lately, it makes more sense to sell those gas-guzzling SUVs, start collecting Louboutins like Lim and convert it into a shoe closet.

Energy standing charges: Why regions pay 60% more than others