Antony Blinken on Sunday wouldn’t rule out U.S. military action if Iranian leaders do not return to the negotiating table next month to resume discussions to prevent them from developing a nuclear weapon.

‘The Iranians have now said that they’re coming back to talks toward the end of November – we’ll see if they actually do, that’s going to be important,’ the Secretary of State chuckled when speaking to CBS Face the Nation host Margaret Brennan.

While Blinken said diplomacy is the preferred path forward, the administration is also exploring ‘other options’.

‘We were also looking at, as necessary, other options if Iran is not prepared to engage quickly in good faith,’ Blinken said. ‘To pick up where we left off in June when these talks were interrupted by the change in government in Iran, and to see if we can get back to mutual compliance – both countries coming back into the agreement as quickly as possible.’

When Brennan pushed on if those options included potential military action, Blinken said: ‘As we always say, every option is on the table.’

Blinken is visiting Rome with Joe Biden this weekend for the G20 summit and holding meetings with his counterparts as the president does the same.

‘Here in Rome, the president got together with Chancellor Merkel of Germany, with the U.K. Prime Minister Boris Johnson, with the French President Emmanuel Macron, and we are in very close coordination with our closest partners on dealing with this challenge posed by Iran’s nuclear program,’ Blinken updated on Sunday. ‘And all of us are also working with Russia and China.’

He added: ‘We still believe diplomacy is the best path forward for putting the nuclear program back in the box it had been in under the agreement – the so-called JCPOA.’

The Joint Comprehensive Plan of Action, more commonly known as the Iran nuclear deal or the JCPOA, is an agreement between Iran and the P5+ countries – China, France, Russia, United Kingdom, United States and Germany – as well as the European Union.

The deal was reached on July 14, 2015 in Vienna under President Barack Obama.

On May 8, 2018, Donald Trump announced the U.S. would withdraw from JCPOA and in November 2018 sanctions came back into effect on Iran leading the country to resume development of ballistic missiles.

‘Iran, unfortunately, is moving forward aggressively with its program,’ Blinken said on Sunday. ‘The time it would take for it to produce enough fissile material for one nuclear weapon is getting shorter and shorter.’

‘The other thing that’s getting shorter is the runway we have where if we do get back into compliance with the agreement and Iran gets back in compliance, we actually recapture all of the benefits of the agreement.’ 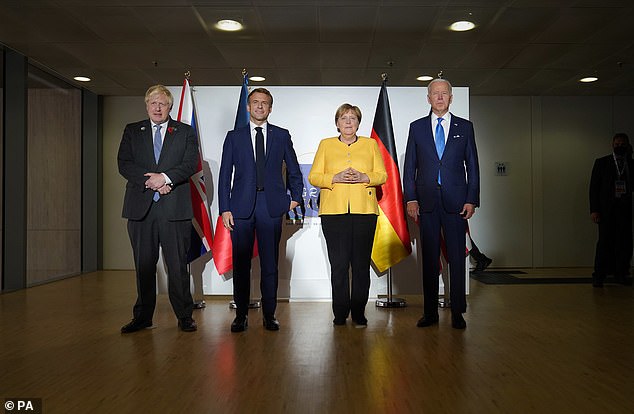 ‘Iran is learning enough, doing enough so that that’s starting to be a problem.’

Over the weekend, an Air Force bomber escorted by fighter jets from U.S. allies flew over key waterways in the Middle East where American and Iranian naval vessels have faced off.

In a statement Saturday, U.S. Central Command (Centcom) announced a B-1B Lancer passed over the Gulf, Bab al-Mandeb Strait, Suez Canal and Gulf of Oman. It also flew over the Strait of Hormuz, a chokepoint for a fifth of world oil output at the head of the Gulf that Iran considers a strategic area of influence.

‘The bomber task force mission,’ Centcom said, ‘was intended to deliver a clear message of reassurance.’

Fighter jets from Israel, Saudi Arabia and Bahrain, all U.S. allies opposed to the Islamic Republic of Iran, escorted the US bomber over their respective airspaces.

‘Military readiness for any contingency or mission – from crisis response to multilateral exercises to one-day presence patrols like this – depend on reliable partnerships,’ said Centcom commander General Frank McKenzie, the head of US forces in the Middle East.

The president was asked when nuclear talks with Tehran were scheduled to resume.

‘They’re scheduled to resume,’ he said, without specifying a timeline.

White House staff previewed that the Saturday afternoon meeting was a way for the leaders to get on the same page about the Iran nuclear deal.

In a joint statement released afterward, the leaders said they shared a ‘grave and growing concern’ over Iran’s ‘alarming’ actions to develop or acquire a nuclear weapon.

The leaders said they hoped there could be a negotiated solution to bring both the Iran and U.S. back into full compliance with the Iran nuclear deal, which former Trump pulled the country out of.

‘In this spirit, we welcome President Biden’s clearly demonstrated commitment to return the U.S. to full compliance with the JCPOA and to stay in full compliance, so long as Iran does the same,’ the leaders’ statement said.

Biden has repeatedly tried to return to the nuclear accord during his first nine months as president. There is growing frustration in the administration over delays in nuclear talks after a hardline government took power in Iran in early August.

What to watch on TV: ‘Doctor Who,’ World Series, Bad Bunny

What to watch on TV: ‘Doctor Who,’ World Series, Bad Bunny