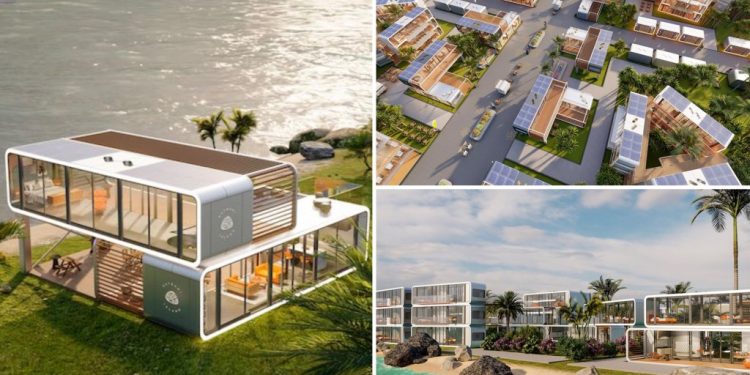 A group of blockchain enthusiasts are turning a 32-million square foot island into what they hope will soon be considered the “crypto capital of the world.”

“After years of preparation, a green light from the Vanuatu Prime Minister and Minister Of Finance and all approvals in place, Satoshi Island is now ready to be developed into a real-world crypto economy and blockchain based democracy,” states a bio for the 800-acre portion of the island nation Vanuatu that has been freshly named after Satoshi Nakamoto, the pseudonymous developer of bitcoin.

A website for Satoshi Island excitedly details its futuristic housing stock and how it is being developed to become a sustainable, smart city built with the crypto community in mind every step of the way: All commerce on the island will be cryptocurrency-based, and all assets and rights will be made possible through NFT ownership.

The island will ideally have some 21,000 permanent residents and is “not a resort,” the site clarifies. It may open to a small group as soon as later this year, The Sun reported.

In a promotional video set to crescendo-ing, inspirational music, a robotic female narrator details how Satoshi Island is being “created to be the first real world crypto economy, running exclusively on cryptocurrency and blockchain technologies.”

“Anyone can own a piece of the island through the availability of an NFT collection made up of 2,100 uniquely identified blocks of land. Each of these blocks are large enough to build a home on, and holders of multiple blocks can combine adjoining NFTs to create larger blocks capable of accommodating expansive homes, commercial spaces or apartment complexes,” she goes on.

Located in the “tropical paradise” of Oceania’s approximately 300,000-person nation of Vanuatu, the private island is owned and operated by a company called Satoshi Island Limited and is accessible by direct flight from Australia, Asia and the West Coast of the US and Canada.

The narrator brags that the island “will become the official home for cryptocurrency professionals and enthusiasts worldwide. A place to visit, work, and live in the first true society built around an entirely decentralized financial system and block chain based democracy.”

The first stage of development has been completed, and visitors can expect to check-in at “traditional-style villas” before exploring the rest of the island, which is as yet undeveloped. Soon, however, it will be full of futuristically-styled, “ultramodern smart homes and offices” designed by architectural firm Cybertecture.

“We have designed something special for the island and we call it the Satoshi Island Module,” Cybertecture’s chief architect, James Law, then explains in the video.

The “self-sustaining buildings” can be stacked to create hundreds of arrangements.

“We’ve already built similar buildings in the past, as seen here are the modules we provided to the Hong Kong government” Law adds as a clip of the modules being loaded onto flatbed trucks played in the background. “Joining the Satoshi Island team in order to build an entire smart city based on those principles was a dream come true.”

Best Rye Whiskeys to Drink in 2022

Best Rye Whiskeys to Drink in 2022