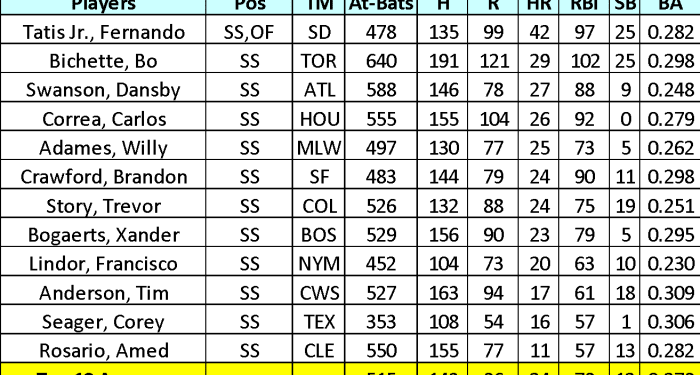 
Last year, 18 shortstops finished with more than 500 at-bats, but I highlighted eight of these players at second and third base. Other than Marcus Semien (115) and Trea Turner (107), only Bo Bichette (121) and Carlos Correa (104) finished with 100 runs or more. Fernando Tatis was the only bat to hit over 30 home runs (over 478 at-bats) that I didn’t showcase at 2B and 3B. Bichette ranked highest in RBIs (102 – tied with Semien, who led the second base rankings in overall production). Six players with shortstop qualifications stole 20 bases or more.

Here’s a look at the top 12 shortstops in 2022 by NFBC ADP over the first half of March:

Since having surgery, Tatis has had an ADP of 55 in all draft formats in the NFBC. His minimum pick was 34, and his maximum was 99 over these eight drafts.

He’ll be in a cast for six weeks, pointing to an early May to start his rehab process. Many news services project him to be back in mid-June. Based on this baseline, I have him projected to play 90 games, leading to 78 runs, 28 home runs, 70 RBI, and 18 stolen bases. Anyone drafting him has to know his downside risk (a longer recovery time and less impact with his bat) while also trying to figure out the value of the replacement player to cover him later in drafts. Also, there is no guarantee that Tatis won’t miss any other time due to another issue.

The emergence of the Blue Jays’ offense and Bichette’s bat puts him on an explosive path in 2022. He offers an edge in all five categories as fantasy managers wait to see his ceiling.

After signing with Boston, Trevor Story takes a hit in potential batting average and power. He hits the ball hard with a history of success in home runs and stolen bases. His new home should lead to a rise in his ADP (36) when adding in that Story has been a top 10 fantasy player multiple times in his career.

Wander Franco has plenty of supporters in 2022, but there are many people who believe he is overpriced in drafts. However, he projects to offer a high average bat with an excellent approach. This year, I expect him to be a stud while also understanding his floor (.280/80/20/80/10). I’d love to pair him with Juan Soto to create an edge in runs and batting average. I expect him to be a first-round fantasy pick in 2023, which requires a high level of success this season.

Corey Seager and Francisco Lindor have the talent to bounce back in a big way in 2022. Seager brings a high average profile, while Lindor should help in four categories with a neutral batting average.

When building a fantasy team, securing steals from the middle infield positions is a must. Bobby Witt looks to have more power and speed than Bichette, but he will need some time to develop in the majors. Nevertheless, I expect him to hit the ground running while outperforming many hitters drafted before him this year.

Correa has cost me well over $30,000 in my fantasy career, and I don’t expect to own him in any leagues this year despite just reaching the prime of his career. He played well last year, but Correa has only had over 425 at-bats twice in his seven seasons with the Astros. I only see a steady player with no value in steals, so my fight for him has left the building for the next big thing at shortstop.

Maybe the best plan of attack for someone willing to make an injury bet on Tatis is to target Ha-Seong Kim later in drafts. He is the player most likely awarded with his at-bats, plus a successful start to the year may very well lead to more playing time at another position. Kim failed to make an impact in his rookie season with the Padres, but his bat delivered plenty of power and speed in Korea.

Gleyber Torres lost his power stroke (12 home runs) over his previous 595 at-bats, leading to many drafters avoiding him this year. On the positive side, he added more speed to his resume while owning a better-than-league average approach. With 62 home runs on his major league resume by the age of 22, Torres should rebound in a big way this year.

Oneil Cruz offers upside, but he will be making the jump from AA to the majors (only 21 at-bats at AAA). His power/speed combination looks inviting, but I see many swings and misses until he gains more experience. Cruz also has a legal issue hanging over him in the Dominican Republic.

Despite posting the best season of his career at age 34 while missing 24 games, I can’t see Brandon Crawford repeating in 2022. He tends to be a liability in batting average, and his speed isn’t repeatable.

The Diamondbacks should give Josh Rojas a full-time starting job in 2022 with an opportunity to hit high in the batting order. His approach should improve with more playing time in the majors while offering some help in home runs and stolen bases. He looks like an excellent value based on his ADP (228) for the correct team structure.

Andres Gimenez was a buzz guy in fantasy drafts last season, but he ended up with more at-bats at AAA. Last year, his power showed growth while still offering a high ceiling in stolen bases. He looks positioned to reward fantasy investors this draft season. A 20/20 season looks within reach.

Nicky Lopez and Isiah Kiner-Falefa were rewarded with more at-bats than expected last year due to injuries. However, their best attraction looks to be stolen bases with minimal value in power. Lopez should hit for a higher batting average, but the Royals’ starting lineup changes point to a bottom-of-the-order opportunity. Kiner-Falefa slides into a much better lineup. Unfortunately, the Yankees will give him more days off in 2022.