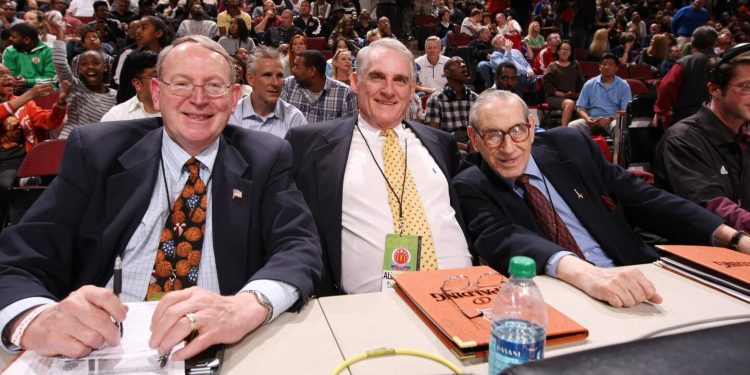 Geoghan, who died last month from complications resulting from a stroke, did whatever was necessary to ensure high school basketball players enjoyed his events. The Capital Classic has been a premier showcase in the D.C. area. Geoghan also co-founded the McDonald’s all-American games, which are among the country’s most renowned high school basketball events.

When McDonald’s celebrates the 45-year anniversary of the all-American games Tuesday night in Chicago, it plans to honor Geoghan, who was 87 at the time of his death, with a custom-made jersey. It will be displayed at the scorers’ table beside an empty courtside seat reserved for Geoghan.

“He did more for basketball in this area than any single coach or anyone for helping the young people,” said Red Jenkins, Geoghan’s longtime friend, who coached in his events and in Northern Virginia. “There’s so many kids who got their education paid for free because of Bob Geoghan.”

Geoghan, who attended high school at Gonzaga in Northwest Washington, founded the Quarterback Club of Washington in 1964 to unite leaders and fans of the NFL squad and other D.C.-area teams. He was an insurance agent before beginning a career in basketball in 1971. He formed an all-star game in Montgomery County featuring the best high school players from Maryland and Virginia.

Three years later, Geoghan created one of the first national all-star events. Held at Capital Centre, where the Washington Bullets played, the Capital Classic pitted the D.C. area’s best players against top players from across the United States. Some in the area doubted the contest’s legitimacy, but with future NBA MVP Moses Malone competing, more than 11,000 fans attended.

“The Capital Classic is the base for the whole explosion of basketball in the D.C. area,” Jenkins said. “There have to be thousands of kids that got scholarships because he brought the spotlight here.”

Geoghan dreamed of creating a larger event. In 1977, along with legendary coaches Morgan Wootten and John Wooden, Geoghan pitched a national showcase to McDonald’s, a potential sponsor. That year, Geoghan formed a committee to select McDonald’s all-Americans to compete in the Capital Classic.

Pat Williams, the Philadelphia 76ers general manager at the time, was impressed with the Capital Classic and offered to host a national game at the Spectrum. In 1978, the first McDonald’s game was played there in front of 13,063 spectators as future Texas A&M center Rudy Woods won MVP. Scout Howard Garfinkel spent 45 minutes on player introductions to ensure the athletes were properly celebrated.

Being chosen as a McDonald’s all-American soon became one of the sport’s highest honors. The game is televised nationally, and on ESPN’s college broadcasts, sportscaster Dick Vitale recognized players who were selected. Many of the NBA’s biggest stars, including Michael Jordan and LeBron James, played in the game. The event raises money for Ronald McDonald House Charities.

“When he thought of the game, he never realized the impact it would have,” said Joe Wootten, the games’ chairman. “NBA [general managers] have told me that the number one event to evaluate prospects for the pre-draft is the McDonald’s practices — more so than any NCAA tournament game, more so than the pre-draft camp. There’s never another time that much talent is on the floor at the same time.”

Geoghan was keen on creating any basketball-related event. In 1996, Morgan Wootten, DeMatha’s former coach, required a liver transplant. At a lunch with a reporter in Rockville, Geoghan learned a coach in Indiana, Ron Hecklinski, also needed a transplant. That sparked an idea.

Geoghan created a tournament to raise money for organ donor awareness. The event occurred in January 1998 at what is now Capital One Arena in front of more than 11,000 spectators.

Through the years, Geoghan accommodated players’ desires. During the Capital Classic, Geoghan took out-of-area players to steak lunches with politicians and sightseeing around D.C. When local players asked for a similar experience in 1983, Geoghan arranged a dinner. In 2002, Geoghan added a girls’ McDonald’s all-American game.

“I don’t think anyone else has put on anything as classy as Bob with the McDonald’s all-American game and the Capital Classic,” said Louis Wilson, a veteran local basketball coach who coached in Geoghan’s events. “Those two events really, really stick out as a cornerstone and the foundation of high school all-star basketball games.”

Geoghan’s friends said he was known for deflecting praise, asking others to speak at the McDonald’s games’ annual ring ceremony.

In 2018, Geoghan arranged a dinner banquet in Bethesda for Villanova’s Jay Wright after he won the John R. Wooden Award as the country’s top coach. Geoghan prepared reservations, guest lists, seating charts and basketballs and books autographed by Wright. When Wright’s schedule changed a few weeks before the event, Geoghan altered the venue, time and meal. At the event, Geoghan was content to receive a brief introduction.

Four years earlier, Geoghan suffered a stroke that left him physically limited, but he continued to endorse his events. During their regular breakfasts at Silver Diner, Jenkins advised Geoghan over scrambled eggs to step away from the games. Geoghan aspired to repopularize the Capital Classic, which has endured declining acclaim in the past decade.

“He walked, he breathed, he talked about making athletic events and sporting events that would be the pinnacle of the high school [level],” said Terri Lynn Wootten, the selection committee director for the McDonald’s all-American games. “It was in everything he did. He just aspired so much to bring such great recognition to high school and youth sports.”

Ukrainian lawmaker outside Kyiv: “For freedom, I’m prepared to fight”