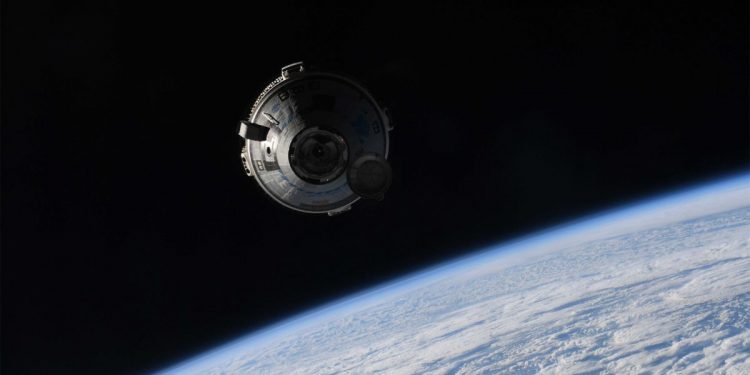 It’s not every day a brand new spaceship arrives at the International Space Station. So when a Boeing Starliner space capsule made its historic first docking at the orbiting lab this weekend, you can bet astronauts were watching.

Boeing’s first uncrewed Starliner spacecraft to visit the station docked Friday night (May 20) and new photos from the orbiting lab’s crew captured the moment in spectacular detail. Starliner’s mission, called Orbital Flight Test 2, is a critical test flight to see if the commercial space taxi is ready to fly astronauts to the station for NASA.

“Welcome Starliner!” wrote astronaut Samantha Cristoforetti of the European Space Agency, who arrived at the station on a SpaceX Crew Dragon capsule in April. She snapped stunning photos of the Starliner spacecraft over a brilliant blue Earth and shared them on Twitter.

In two of Cristoforetti’s photos, Boeing’s Starliner is seen approaching the International Space Station. Two others show the commercial space capsule after it linked up with a forward docking port on the station’s U.S.-built Harmony module.

Still another photo shows Starliner, but just barely. It was taken early in docking operations Friday, when Starliner was a mere light in the vast dark of space.

“She’s here!” Cristoforetti wrote at the time. “Only a small dot for now, but soon she will knock at our door.”

Cristoforetti snapped her photos of Starliner as two NASA astronauts, Kjell Lindgren and Robert Hines, watched over the spacecraft’s approach to make sure it went according to plan.

“Starliner is looking beautiful on the front of the space station,” Hines radioed to Mission Control after the docking success.

Still more stunning photos of Starliner were captured by Russian cosmonaut Sergey Korsakov, who snapped images of the approaching Starliner as it was poised behind a visiting Northrop Grumman Cygnus cargo ship.

Boeing’s Starliner OFT-2 spacecraft launched into orbit on Thursday (May 19) on an Atlas V rocket that lifted off from Cape Canaveral Space Force Station in Florida. The spacecraft will spend about five days linked to the station while astronauts and Boeing perform a series of tests to measure its performance.

Starliner is one of two commercial spacecraft picked by NASA to fly astronauts to and from the International Space Station. The U.S. space agency picked Boeing’s Starliner and SpaceX’s Crew Dragon vehicles to fly taxi flights to the station in 2014.

SpaceX has been flying astronauts for NASA since May 2020, but Boeing’s Starliner has been delayed by a string of setbacks.

In December 2019, Boeing’s first uncrewed Starliner test flight failed to reach the space station when software issues prevented it from reaching its intended orbit. In August 2021, attempts to launch this second test flight were stalled by stuck valves on the Starliner spacecraft.

But on Friday, those problems appeared to be resolved for the most part, though Boeing engineers are investigating some glitches that popped up during Starliner’s trip to the station.

Two of 12 main thrusters failed early in the mission and two more smaller reaction control thrusters shut down during Friday’s docking operations. Engineers also had to work around a colder-than-expected thermal cooling system loop, but none of the glitches posed a serious risk to the mission, Boeing officials said.

Cristoforetti, Korsakov and the rest of the International Space Station’s seven-person Expedition 67 crew will open Starliner’s OFT-2 spacecraft for the first time on Saturday. The spacecraft is carrying 500 pounds of supplies and gear for the astronauts.

Boeing currently plans to undock the Starliner capsule on May 25 for a planned land-based landing at White Sands Space Harbor in New Mexico, but that landing target and departure date may chance depending on weather conditions, NASA and Boeing have said.