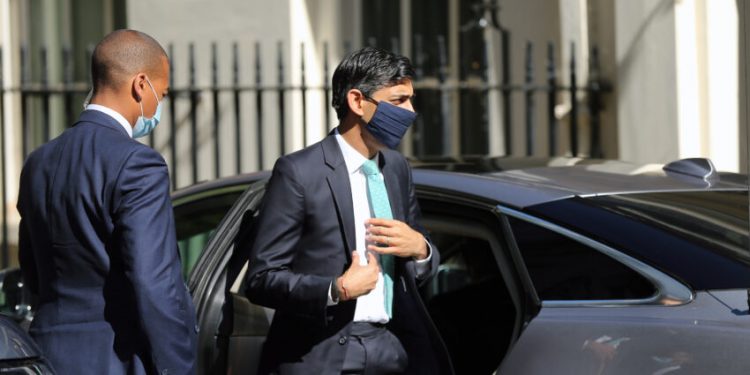 
Boris Johnson has approved an investigation into Rishi Sunak’s family finances but said he had full confidence in his chancellor.

A cabinet colleague insisted this morning that Sunak was not too rich to be chancellor as further questions were raised about his declarations of interest.

Sunak referred himself last night to the government’s ethics chief over his declarations. This morning the prime minister approved an investigation by Lord Geidt, the independent adviser on ministerial interests.

“I can confirm that the prime minister has agreed to the request from the chancellor for Lord Geidt to undertake this work,” Johnson’s deputy spokeswoman said. Asked if Johnson continues to have “full confidence in the chancellor”, she said: “He does.”

Allies of Johnson are urging the chancellor to publish his own tax records as Sunak attempts to regain the initiative after revelations about his wife’s non-dom status. He headed to work in the Treasury’s Darlington office this morning, insisting that he was not thinking of quitting.

George Eustice, the environment secretary, acknowledged that ministers should not take a decision “that’s got a direct impact on your own family members”, but insisted Sunak had not done so and that a change in non-dom status in last year’s budget would not have affected his wife.

Asked if Sunak was “too rich” to be chancellor or potential party leader, Eustice told Today on BBC Radio 4: “I don’t think it’s right that we should have a rule that says you’re too wealthy to be able to do a role — what matters is the knowledge, the technical expertise that you have.”

He said that talking to constituents kept ministers “grounded”, saying: “You can’t walk a mile in everyone’s shoes, all of us have different perspectives, different experiences in life, and for any MP, let alone minister, the single most important thing is an ability to empathise [with] people who might have had experiences and challenges in their life, that you’ve personally not experienced.”

Sunak is adamant that he declared all his interests to Cabinet Office and Treasury officials, but Steve Reed, the shadow justice secretary, questioned why public registers of interests had no mention of “his wife’s £690-million share-hold in Infosys, an IT company based in India, which has had, according to what we’ve been able to find out, 15 different one-to-one meetings with senior ministers, including the prime minister, and has been awarded multimillion-pound government contracts”.

It also emerged last night that Sunak’s US green card, which he has admitted holding for nearly two years after becoming chancellor, expired because he was not able to visit the United States because of the coronavirus pandemic.

Sunak has asked Lord Geidt, the independent adviser on ministers’ interests, to review the “various declarations of interest that I have made” since joining the government to judge whether he has been fully transparent.

“I am confident that such a review of my declarations will find all relevant information was appropriately declared”, Sunak wrote, saying “my overriding concern is that the public retain confidence in the answers they are given and I believe the best way of achieving this is to ensure those answers are entirely independent”.

Akshata Murty, Sunak’s wife, will now pay UK taxes on her overseas income and ministers insisted it was time to “move on” from the controversy. However, Labour insisted there were “a lot more questions” for the chancellor to answer about why she retained non-dom status and what tax she planned to pay in future.

A blame game is also now under way after Sunak launched an inquiry threatening criminal penalties against whoever had leaked the information, which was known only by “a very small handful of people” in government. Ministers have accused civil servants of leaking to damage the government, but officials suggested they were being “thrown under the bus” and blamed for political gain.

The prime minister has given Sunak his backing and No 10 sources said he was “absolutely 100 per cent behind Rishi”. But Johnson’s allies say Sunak was “not smart” to appear defensive about the story.

“Part of the solution is to say, ‘This is how much tax I pay, this is how much tax my wife pays,’ ” one minister said. “It would clear up that nagging feeling that this is all about dodging tax. There’s no suggestion that he’s done anything wrong, but this drip, drip creates that notion. He needs to have that open book moment.”

Some in government are urging Johnson to move Sunak to the Foreign Office in a job swap with Liz Truss to “put things to bed and allow everyone to hold their heads high”, but No 10 said there were no plans to do so.

Kit Malthouse, the policing minister, said “Rishi Sunak has been a remarkable force for good in this country over the last two years” and insisted the chancellor “remains committed to the job”. But he accepted “the juxtaposition is not ideal” as the story came out on the day a tax rise took effect.

He told the BBC that Murty’s tax arrangements were “perfectly legal”, but acknowledged “it offended against the sense of British fair play and so they’ve changed the situation”.

Speaking on Times Radio, Malthouse said: “Rishi Sunak is an honorary Yorkshireman now, as a member of parliament up there, and he knows well the Yorkshire saying, ‘Tough times don’t last, tough people do’. ”

Sir Tom Scholar, the Treasury permanent secretary, is beginning a leak inquiry and Sunak’s team believe the leak was “potentially criminal”, even though laws imposing a duty of confidentiality on HM Revenue & Customs do not apply to other officials.

One minister said the leak “looks like a well-choreographed political attack” and another ally of Johnson insisted civil servants were responsible. “I think this leak is officialdom rather than anyone political, as no one benefits from this politically. It creates a real sense of ‘us and them’ and feeds that Labour narrative of being out of touch when actually Boris is so in touch. It makes everyone look bad.”

However, Dave Penman, head of the FDA civil servants’ union, said that the “vast majority of leaks are political. Civil servants know the consequences and have long established whistleblowing procedures if they think there is a public interest” and had little to gain by risking their career if discovered. “This has all the hallmarks of a political leak,” he said.

Yvette Cooper, the shadow home secretary, said the Sunak family tax arrangements were legal “but the question is whether it’s ethical”.

Sunak has also been accused of “a lack of transparency” over the issue of his green card, but his allies said he had consulted American lawyers and was confident he had broken no rules, emphasising that holding a green card meant he was liable to pay more tax.

Sunak paid UK taxes in full on his British earnings, including his government salary, but until his green card lapsed last October was also required to account to the US authorities, potentially opening him to double taxation.

Malthouse said the green card was “a hangover” from Sunak’s time working in America before he was an MP. Asked by the BBC’s Sunday Morning if Sunak’s retention of US residency meant he was not committed to Britain, Malthouse said this was a “rotten insinuation”, insisting that the chancellor had “put himself forward for public service in the most committed way he possibly could at a time of turbulence”.

Sunak had previously used the green card for private travel to the US, where he has a home in Santa Monica, and returned it before his first trip to the US as chancellor.

Malthouse said holding a green card “actually added more complexity and more onerous obligations to him and not less”, from a tax perspective. “He made a statement that when he did go to the US as chancellor of the exchequer — as a minister, I think — he asked what he should do and they said, ‘Hand it back’, and he did.”

However, sources close to Sunak accepted that the green card had in fact “fallen away” by this point because he had been unable to travel to the US for more than a year during the pandemic and that the chancellor had not attempted to challenge this.

US government guidance tells green card-holders they “will be found to have abandoned your permanent resident” if there is evidence they do not intend to make the US their permanent home.