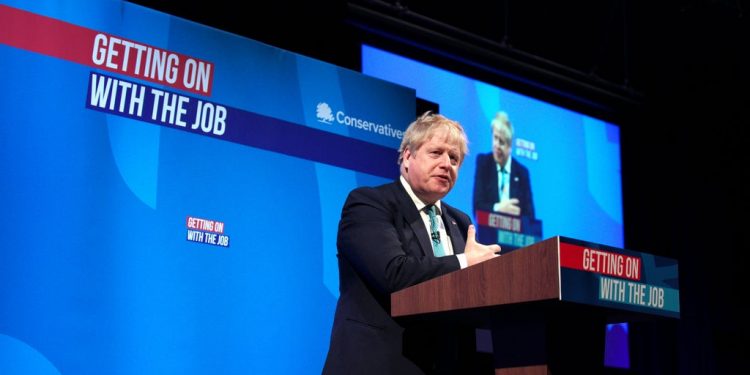 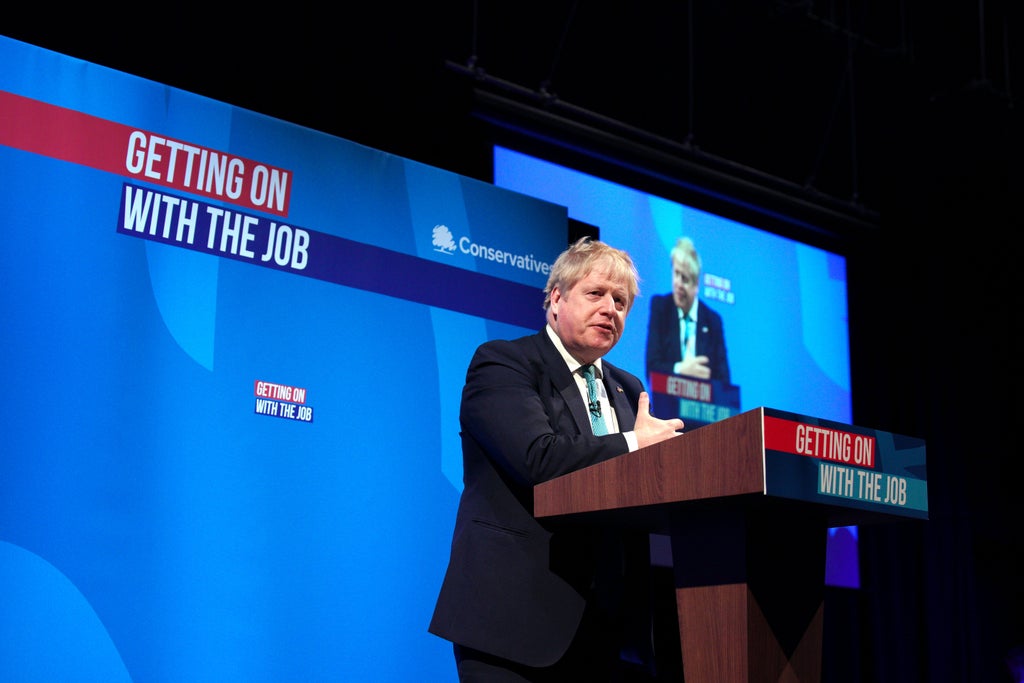 Boris Johnson has compared Ukrainian resistance to Russia to Britain voting to leave the European Union, in highly controversial comments at the Conservative spring conference.

The prime minister also became the latest in a string of ministers to suggest that the seriousness of the situation in Ukraine should bring a halt to debates in Britain over supposedly “woke” issues like preferred pronouns and the removal of statues linked to slavery.

Mr Johnson told activists in Blackpool that Vladimir Putin’s invasion of Ukraine was motivated by a fear that the example of freedom and democracy in a neighbouring country would inspire Russians to revolt against his rule.

And, speaking to an audience which included Ukrainian ambassador Vadym Prystaiko, he tried to draw a parallel with the UK vote to leave the EU in 2016, as well as the enthusiastic take-up of vaccines against Covid-19.

“I know that it’s the instinct of the people of this country, like the people of Ukraine, to choose freedom every time,” said Mr Johnson.

“I can give you a couple of famous recent examples. When the British people voted for Brexit in such large numbers, I don’t believe it was that they were remotely hostile to foreigners.

“It’s because they wanted to be free to do things differently and for this country to be able to run itself.”

When Britons came forward to get the Covid jab, “it was because they wanted to get on with their lives, they were fed up with being told what to do,” he said.

And he added: “It is the invincible strength of this country that we believe – by and large and within the law – that people should be able to do whatever they want providing they don’t do harm to anyone else. That’s called freedom.

“We don’t need to be woke. We just want to be free, and that’s why talented people are fleeing Russia right now. That’s why they’re flocking to the UK.

“That’s Putin’s tragedy. There’s a sense in which his disastrous error in Ukraine is itself an argument for democracy and freedom.”

Mr Johnson paid a back-handed compliment to the BBC for providing accurate reporting on the situation in Ukraine, while pandering to his Tory audience by suggesting that the publicly-funded broadcaster was giving only “a version” of the truth

“Seriously, if Putin had a free press – if he had the BBC on his case – he would have known the truth,” said the PM. “Or a version of it.”

Mr Johnson was the last in a string of ministers at the annual gathering to see to use the Ukrainian crisis as a tool in their long-running “culture war” against people arguing for more sensitive use of potentially offensive language and symbols.

Shortly before he took to the stage, foreign secretary Liz Truss too had turned her fire on “woke” issues, telling the conference: “We have to be proud of our country and our long-standing commitment to freedom and democracy.

“Now is the time to end the culture of self-doubt, the constant self-questioning and introspection, the ludicrous debates about language, statues and pronouns.

“Our history, warts and all, is what makes us what we are today. We live in a great country, a great democracy and we should be proud of it.

“When we are facing tyrants like Vladimir Putin, the only thing he understands is strength. We need to stand up for our society. We must never let our guard down again.”

And Brexit minister Jacob Rees-Mogg said the Ukraine crisis was “a reminder that the world is serious, and that there are serious things to be discussed and serious and difficult decisions for politicians to take, whether this is about reopening and having new licences for oil wells in the North Sea, or whether it is about getting away from the wokery that has beset huge sections of society”.

Conservatives should refuse to adopt “socialist” language like saying “chair” instead of “chairman” and go back to saying Peking rather than Beijing, said Rees-Mogg

In the aftermath of Putin’s invasion, “all that nonsense is shown up for the trivial nature of it”, he said.

“We should be robust about how we use language. If we just cede the ground, then wokery advances.

“But when serious things happen and wokery is in retreat, we should make these arguments.”