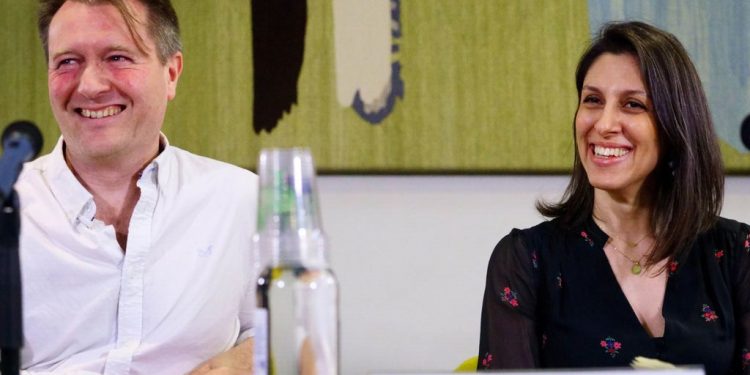 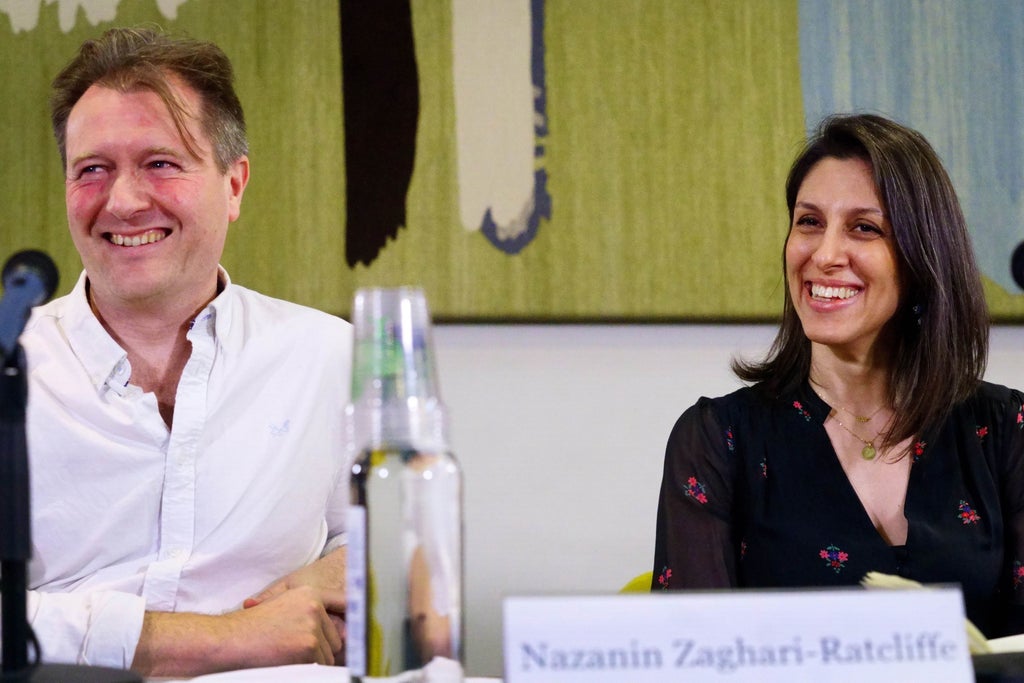 Related: Nazanin Zaghari-Ratcliffe says she lost trust in government to bring her home

Downing Street condemned social media abuse targeted at Nazanin Zaghari-Ratcliffe today after she said her release from an Iranian prison should have happened “six years ago”.

Trolls attacked the British-Iranian national online, saying she should be grateful and suggesting that she was at fault.

Boris Johnson’s official spokesperson said she “should not have to face any sort of abuse, social media or otherwise” and that “she is rightly able to voice her opinion on any topic she wishes.”

Earlier, former foreign secretary Jeremy Hunt said people criticising Ms Zaghari-Ratcliffe have got it “so wrong”, after she said on Monday that the government took too long to pay a £400 million debt to Iran that dated back to 1979.

Meanwhile, ahead of the chancellor’s spring statement tomorrow, at least five ministers are reportedly urging Rishi Sunak to defer his planned 1.25 per cent National Insurance hike.

The senior Tories are concerned about “stagflation” – high inflation, economic stagnation, and higher unemployment – according to The Telegraphat a time when living costs are already sky-high.

Boris Johnson hinted at more military support for Ukraine following a call with US president Joe Biden and other allies ahead of the Nato summit on Thursday.

The prime minister also “underlined his horror” at Russia’s “use of increasingly brutal tactics in Ukraine”, including “siege warfare and targeting of civilians”, said Downing Street in a press release.

Mr Johnson, along with France’s Emmanuel Macron, Germany’s Olaf Scholz and Italy’s Mario Draghi, affirmed their “commitment to support Ukraine militarily, diplomatically and economically, equipping the democratically-elected government in Kyiv with the tools it needs to defend itself”.

The leaders also “resolved to increase the pressure on Russia to halt its unprovoked invasion, including maintaining wide-ranging and coordinated sanctions”.

Conservative MP Kit Malthouse is being criticised for a “distinct lack of urgency” after he repeatedly said that the government must wait for the police watchdog report investigating the strip search of a Black schoolgirl.

While the minister for policing and crime condemned the “distressing” incident, he insisted that the government wait for the report by the Independent Office for Police Conduct to get a sense of “full picture” before taking further action.

Labour MP for Eltham, Clive Efford, criticised Mr Malthouse for having a “wait and see attitude”, and said: “I feel like we’ve woken the minister from an afternoon nap to come in and make this statement”.

He added: “There’s a complete lack of urgency in his approach. It is quite clear that there are areas now where the Government can act; why isn’t the minister coming to this house to explain to us just exactly what he’s going to do, rather than this wait and see attitude.”

Read the details in this report by our race correspondent Nadine White:

The Metropolitan Police have begun interviewing key witnesses in the Partygate scandal, with Scotland Yard announcing it has sent over 100 questionnaires to Downing Street and Whitehall staff asking them about gatherings during the Covid lockdowns.

“In addition to the detailed review of all available material, including returned questionnaires, detectives from the Operation Hillman investigation team have started interviewing key witnesses,” said a Met Police spokesperson.

The Independent has learnt that Mr Johnson, who returned his questionnaire to investigators last month, has not been called for an interview.

Read the details about the Partygate investigation in this report by Adam Forrest:

The High Court is due to hear two legal challenges over the use of WhatsApp and other messaging apps by ministers.

Campaign groups All the Citizens moved the court arguing that the use of instant messaging apps such as WhatsApp and Signal, which allow the messages to be deleted automatically, for government business is unlawful.

In their separate claim against prime minister Boris Johnson, the Good Law project is expected to argue over the use of non-government communication channels.

Lord Justice Singh and Mr Justice Johnson are to hear the claims for three days.

Nazanin Zaghari-Ratcliffe said she lost hope in the ability of the UK government to bring her home, after a string of foreign secretaries failed to get her out of detention.

Speaking in the parliament on Monday, at her first press conference, the British-Iranian dual national said she did “not really agree” that she should be thanking the foreign secretary for her return.“

“But I was told, many many times, ‘We’re going to get you home.’ That never happened. So there was a time when I felt like, do you know what, I’m not even going to trust you because I’ve been told so many times that I’m going to be taken home. But that never happened!”

Foreign Office chiefs have been accused of a cover-up to disguise that prime minister Boris Johnson ordered the rescue of dogs and cats from Afghanistan.

In a stormy evidence session, top civil servants failed to back up Mr Johnson’s claim that he was not involved in the decision – instead saying they did not know.

But MPs cast doubt on why Philip Barton, the Foreign Office’s top civil servant, and Nigel Casey, the special representative for Afghanistan, had not established who gave the order to give priority to Pen Farthing’s Nowzad animal charity.

Tom Tugendhat, the Tory chair of the Commons foreign affairs committee called it “a little bit odd”, telling the pair: “It makes me wonder whether you deliberately didn’t want to know.”

Our deputy political editor Rob Merrick has the details:

‘Nazanin Zaghari-Ratcliffe does not owe us gratitude’ – Hunt

Nazanin Zaghari-Ratcliffe does not owe the UK government gratitude for her release from a prison in Iran, Jeremy Hunt said.

Mr Hunt added that Ms Zaghari-Ratcliffe, a British-Iranian dual national, did not owe him or the four other foreign secretaries who had presided over her case “a debt of gratitude”.

Yesterday, she spoke publicly for the first time at a press conference in Portcullis House, and she said her release last Thursday should have happened “six years ago”.

The use of chemical or biological weapons by Russian forces in Ukraine would “undoubtedly” be a war crime, business minister Paul Scully said.

Earlier, Joe Biden warned that Vladimir Putin’s “back is against the wall” and that he could resort to using his stash of chemical or biological weapons.

Asked if their use would be a war crime, Mr Scully told Sky News: “Undoubtedly. I think President Biden and the Prime Minister have been really resolute in making sure that we can take every action with the international community to address those crimes of Vladimir Putin.

P&O Ferries sacking 800 of its seafarers to hire agency workers from India on £1.80 an hour could be met with prosecution if the move is deemed to be illegal, according to the government.

Business minister Paul Scully spoke on Sky News to say that the government will get “prosecuting authorities to tackle this” if English and maritime law deems it to be illegal.

If it’s legal, the government wants to “support” the 800 people who had lost their jobs with immediate effect to find “good work”, he said.

Mr Scully added: “But we have to work with international partners, because this is a complex web of international maritime law when you have vessels flagged with other countries.”

Mr Scully also spoke to BBC’s Radio 4 Today programme to say: “If they have flouted the notification law where they are supposed to tell the secretary of state when they are going to make more than a hundred people redundant, then there are criminal sanctions involved in that, including an unlimited fine.”

Vladimir Putin is becoming “more isolated” on the world stage as the West ships “lethal aid” such as anti-tank missiles to Ukraine, minister Paul Scully said.

He spoke to LBC after Joe Biden issued a fresh warning that Putin’s “back is against the wall” and that he may resort to using his chemical or biological weapons arsenal.

Mr Scully said: “Western intelligence has been very good with predicting what’s going on with the conflict.

“I think sometimes it seems that Western intelligence knows more than Vladimir Putin because he seems to be getting more and more isolated.

“But nonetheless, it’s so important that we continue to support the Ukrainians, and also the Polish with air defences as required as a fellow Nato member.

“We will continue to bring in lethal aid from anti-tank missiles to other support.”