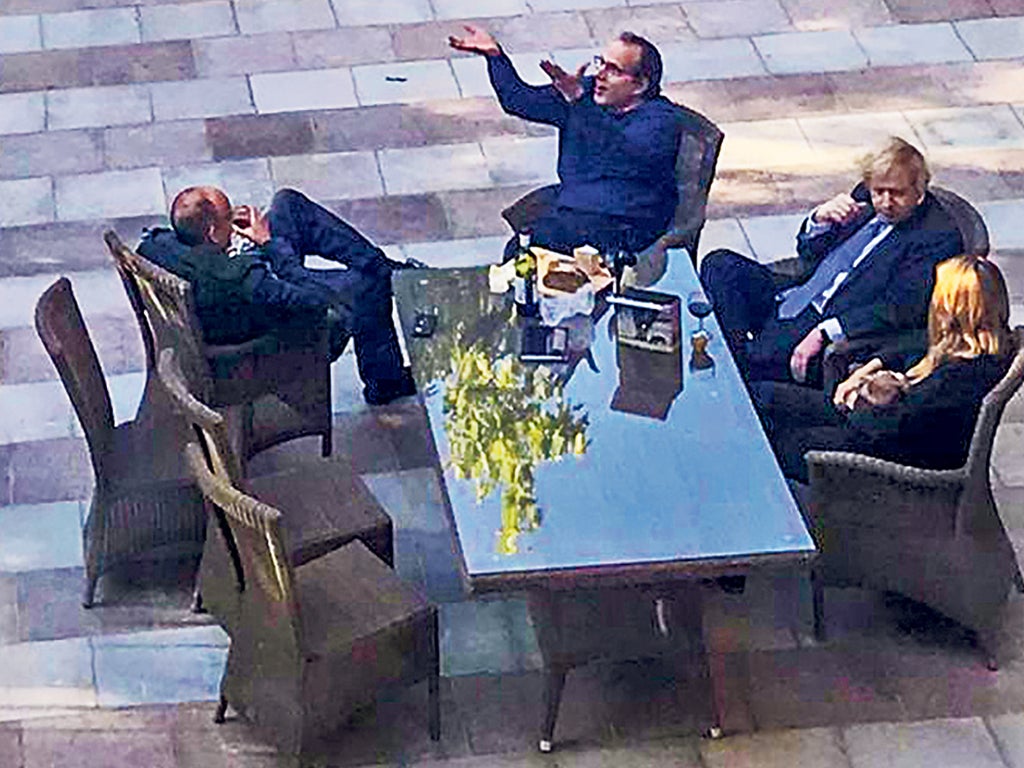 Dominic Raab’s latest gaffe – in which he said Boris Johnson’s wine-and-cheese gathering with staff in the No 10 garden during lockdown was “after” work had finished – has left No 10 struggling to explain the controversy.

The deputy PM undermined Downing Street’s defence of it as a work event by telling interviewers it was staff relaxing after “a gruelling day”.

Mr Johnson’s official spokesman later attempted to explain the situation, by arguing that the PM and his staff were “discussing work”, which happened to be “in the No 10 garden”. He also said drinking alcohol was fine because it was “post-normal work hours” – and yet, because it was still a “work meeting” it also complied with the Covid rules.

It comes as adults in Britain think it likely that the PM will not still be in office by the end of 2022, according to an opinion poll published by Ipsos Mori. Six out of ten people (62 per cent) believe Mr Johnson will be out of No 10 by this time next year, the data shows.

Nadia Whittome, Labour MP for Nottingham East, has tweeted her criticism of the Downing Street ‘garden party’, recalling a story of a care worker who “was fined £200 for sitting alone in her car at a local beauty spot” during a later lockdown

The Times’, Steven Swinford tweets that the Cabinet meeting on the current Covid situation and possible new restrictions has “hit the two hour mark”

Let’s hear from Tory MP Mark Harper now, who has said “not telling the public what’s going on is unacceptable” amid reports the government is not preparing to announce new Covid measures later on Monday.

It comes after The Sun claimed the PM is not expected to announce any new restrictions on Monday, with the paper also reporting senior ministers had demanded more time to examine the latest Omicron data before agreeing to any changes.

Mr Harper, MP for Forest of Dean and a former chief whip, retweeted the report saying: “Not telling the public what’s going on is unacceptable.

“These are big decisions affecting everyone’s lives, people’s livelihoods and mental wellbeing across the country.

“We all deserve to see the data ministers see. Show us your workings. We can do so much better than this.”

Watch: Truss sets out why Brexit would be bad for Britain in 2016

Rayner makes light of No 10 claims about garden ‘party’

Labour is ready to support new restrictions to stem the spread of the Omicron variant of Covid-19, so long as they come with an adequate support package for those affected, Sir Keir Starmer has said.

Speaking to The Independent the day after Boris Johnson missed a Cobra meeting to discuss the fast-rising tide of infections, Sir Keir accused the PM of being “absent” and called on him to get a grip on the problem.

There are expectations of a large revolt if the prime minister asks MPs to back tougher Covid measures than those already in place, such as limits on indoor mixing of households or a curfew on pubs and restaurants opening.

Our political editor Andrew Woodcock has the full report:

Most adults in Britain think it likely that Boris Johnson will not be prime minister by the end of 2022, an opinion poll published by Ipsos Mori on Monday suggests.

Six out of ten people (62 per cent) thought Johnson will be out of his job by the end of next year, the poll found.

The PM is delaying a press conference so top ministers can examine the latest Omicron data before greenlighting any new measures they worry will ruin Christmas for a second year running, according to The Sun.

However, ministers including Rishi Sunak, Liz Truss and Kwasi Kwarteng are believed to be among the ministers afraid of the impact of another lockdown on the economic recovery.

It comes after Dominic Raab this morning warned the situation was changing “hour by hour” in the biggest hint yet more measures were on the way.

The Deputy PM said there are no “hard and fast guarantees” more restrictions won’t be imposed by Christmas to tackle the Omicron tsunami.

Could LINK slide below $15 in the coming days?