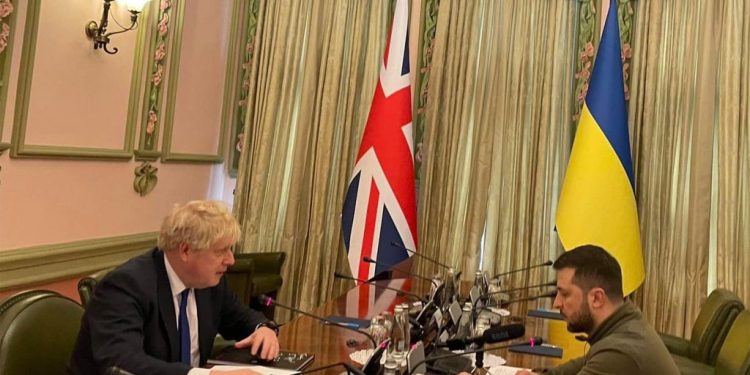 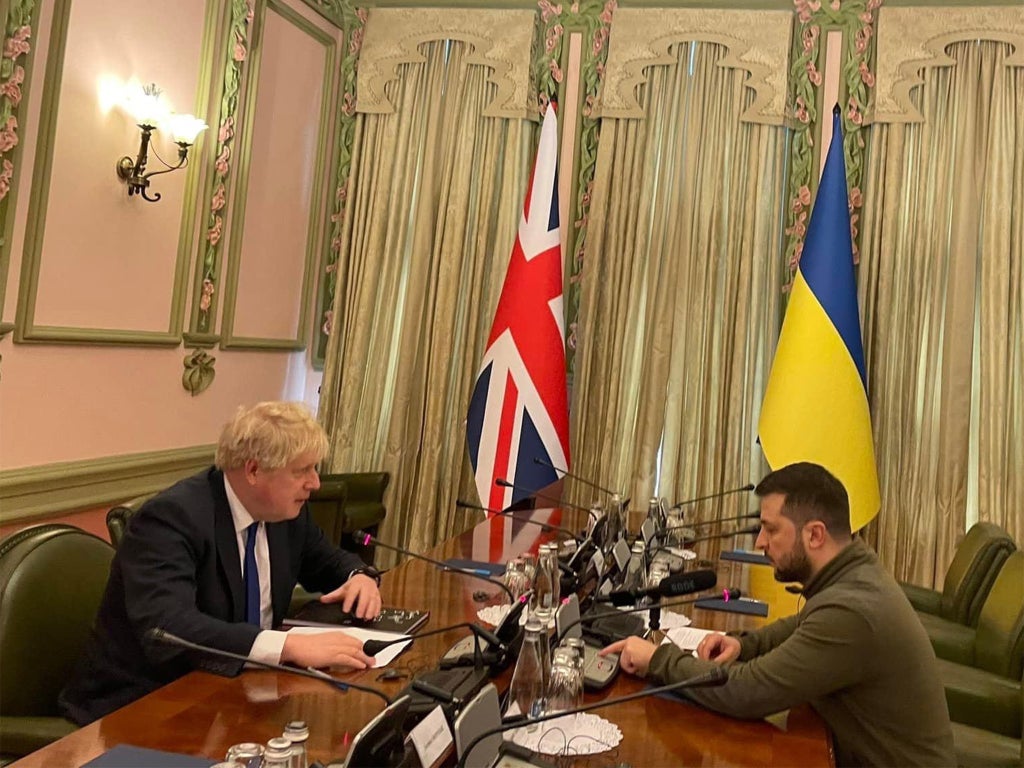 Boris Johnson has been seen with Ukraine’s president Volodymyr Zelensky at a surprise meeting in Kyiv.

The British prime minister was pictured at a table opposite Mr Zelensky on Saturday, with the Union Jack and Ukrainian flag in the background.

It is believed to be the first time the pair have met in person since Russia invaded Ukraine a month and a half ago, starting a war reported to have killed hundreds of civilians and displaced millions more.

A Downing Street spokesperson confirmed the two had met in Kyiv on Saturday after an image of the leaders together was met with surprise on social media.

“The prime minister has travelled to Ukraine to meet President Zelenskyy in person, in a show of solidarity with the Ukrainian people,” the No 10 spokesperson said.

“They will discuss the UK’s long term support to Ukraine and the PM will set out a new package of financial and military aid.”

Andriy Sybiha, a Ukrainian presidential aide, said Mr Johnson had started his visit to Kyiv with a “tete-a-tete” meeting with Mr Zelensky.

Ukraine’s embassy in the UK shared an image of the two leaders meeting on Saturday, with the caption “surprise” and a winking face emoji.

The Tory party chair had previously said the UK prime minister was “desperate” to visit Ukraine to witness what was happening in the country under siege.

But a senior government official told The Independent last month such a trip would be “nonsensical” and his time would be “better spent addressing Home Office dysfunction” over the UK’s response to the refugee crisis sparked by the war.

Mr Johnson is believed to have last visited Ukraine and met Mr Zelensky at the start of February as the threat of a Russian invasion loomed.

His latest trip to Kyiv came as Ukrainian authorities told civilians to flee eastern areas, where Russia was amassing its troops.

The warning came the day after the bombing of a train station where civilians were sheltering, which killed at least 52 people.

The Independent has a proud history of campaigning for the rights of the most vulnerable, and we first ran our Refugees Welcome campaign during the war in Syria in 2015. Now, as we renew our campaign and launch this petition in the wake of the unfolding Ukrainian crisis, we are calling on the government to go further and faster to ensure help is delivered.