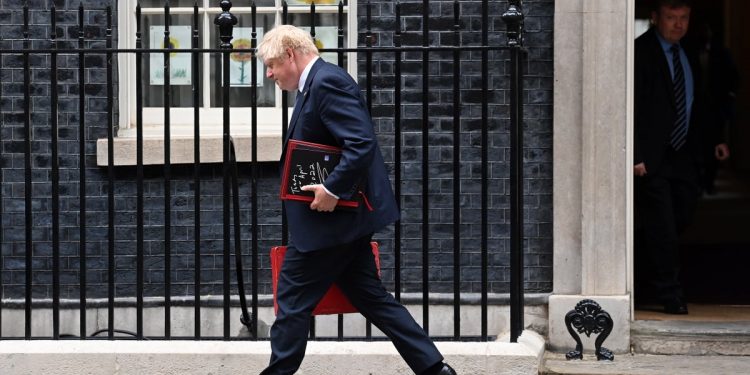 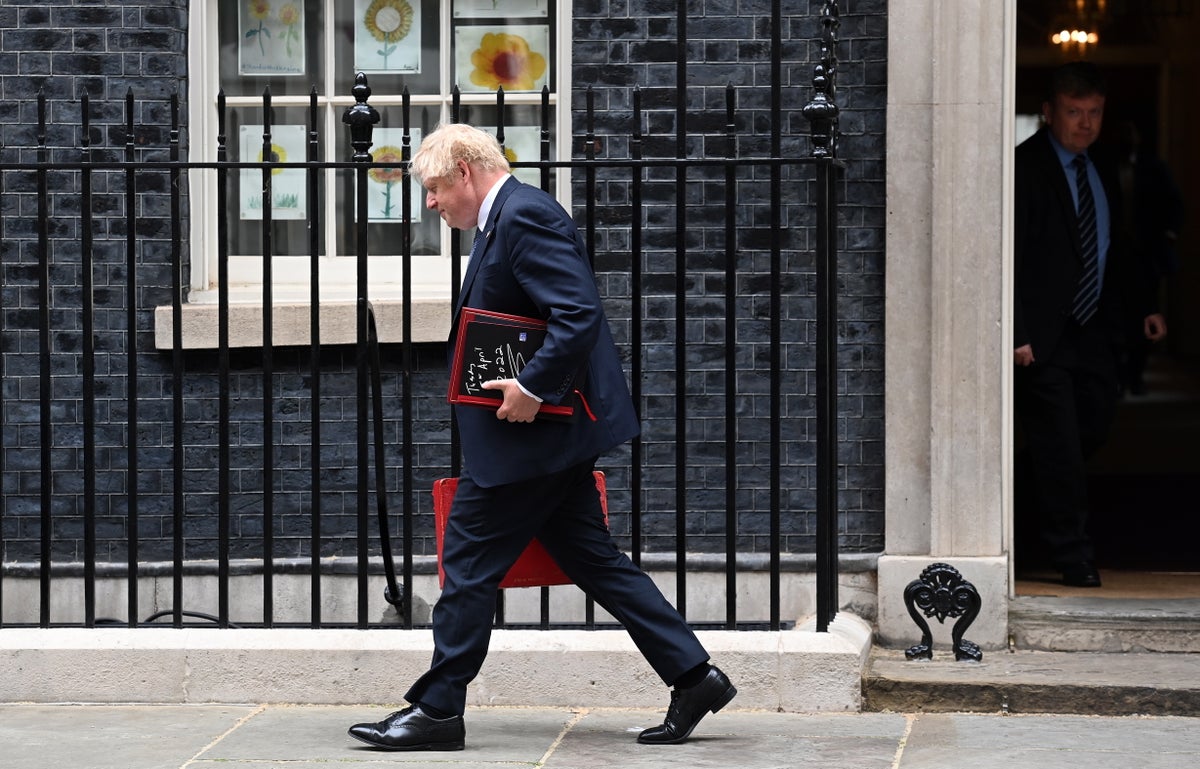 The race to replace Boris Johnson as Tory leader and prime minister is well underway after he finally agreed to quit on Thursday morning following an avalanche of ministerial resignations and cabinet walkouts.

Mr Johnson has vowed to remain in office until the autumn to keep the wheels of government turning until a permanent successor can be appointed by his party. But it was unclear if he could last that long, with some MPs furious at his handling of a series of recent scandals and the acrimonious nature of his resignation.

The disintegration of government was prompted after the twin resignations of Rishi Sunak, the chancellor and Sajid Javid, the health secretary, on Tuesday. They both took swipes at Mr Johnson’s integrity, with Mr Javid saying that “the public rightly expect government to be conducted properly, competently and seriously.”

The straw that broke the camel’s back was Mr Johnson’s handling of sexual assault allegations against Chris Pincher MP, who was forced to resign as deputy chief whip last week after being accused of drunkenly groping two men at a private members’ club, which he denies.

The list of candidates to replace Mr Johnson has lengthened in recent months. Here is a list of the runners and riders.

Penny Mordaunt, the MP for Portsmouth North and international trade minister, and a key figure in the 2016 Leave campaign in the EU referendum, is a favourite to replace Mr Johnson.

Ms Mordaunt might be viewed as an outside bet but she is likely to attract support. Her recent work has included leading efforts to secure economic pacts with American states and she is considered a strong speaker and regarded as being on top of her brief in the Commons.

However she has been criticised over recent days for making no public statement on the future of Mr Johnson’s premiership. She has not resigned as a minister from the government and while other leadership candidates were quitting, citing issues of integrity and honesty, she was instead tweeting support for Priti Patel’s crackdown on people smuggling.

On Thursday morning, she signalled her support of defence secretary Ben Wallace’s statement, which said that other MPs should try and defenstrate the PM.

The chancellor has seen his fortunes decline amid the fallout from revelations in The Independent about his family’s tax status.

But bookies have not fully turned against Mr Sunak, who remains in the top five MPs most likely to take over the reins from Mr Johnson.

The 42-year-old was once a favourite, at least in part due to his pandemic payouts, but he has since been criticised for being slow to react to rising energy bills and not doing enough to help the poorest households.

He will have gained some political capital for resigning as chancellor early, and triggering Mr Johnson’s ultimate downfall. Some commentators have said that his decision to not make a public resignation speech in the Commons, unlike Sajid Javid, was a shrewd political move which will play well with the backbenchers.

Jeremy Hunt, the former health secretary, is another candidate likely to compete for the Tory crown.

Mr Hunt, who has also served as foreign secretary, has been very visible in the media of late, giving interviews to a number of outlets, talking about his new book and the future of the Conservative Party. He recently warned his colleagues that the Tories have a “big mountain to climb” if they are to win the next general election following the Partygate scandal.

Mr Hunt, who came second to Mr Johnson in a 2019 leadership contest, refused to rule out another tilt at the top job but previously cautioned that it was not the right time for a leadership contest due to the war in Ukraine.

“But I would be very open with you that I don’t rule out a return in the future,” he added.

Liz Truss, long touted as a future leader, is another contender.

The foreign secretary and MP for South West Norfolk saw her stock rise after building a reputation as someone who could get a job done, securing a series of mini trade deals during her tenure as international trade secretary.

“Fizz with Liz” had been a phrase associated with the foreign secretary amid reports earlier this year that she hosted MPs in her parliamentary office in a bid to schmooze possible backers.

Her threats to overwrite parts of the controversial Northern Ireland protocol as well as her sanctions response to Russia over Ukraine went down well with some Conservative backbenchers.

More recently, however, Downing Street has moved to distance itself from the foreign secretary’s harsh rhetoric on the protocol and she has been criticised for what some have described as leadership posturing during a crisis.

She has been on a foreign trip for the past few days and so has not been drawn into the political infighting on the ground in Westminster. However she decided to back Mr Johnson from afar, with the BBC reporting that she was “100% behind the PM”.

Ben Wallace, the defence secretary who has been widely praised for his performance during Vladimir Putin’s invasion of Ukraine, is in a three-way tie with Mr Hunt and Ms Truss according to the bookies.

He has won admirers in Westminster for his straight-talking and straight-forward approach to politics, particularly among Tory MPs who pressed for the UK to increase its defence spending although cuts to the size of the army remain a cause for concern.

Mr Wallace, who served in the Scots Guards, remains a key voice in the UK’s response to Russia’s renewed invasion of Ukraine and this increased exposure could assist any leadership bid.

He has been wary to weigh in to plans to oust the prime minister however. On Thursday morning, Mr Wallace sent out a rather vague statement, saying: “A number of us have an obligation to keep this country safe, no matter who is PM.

“The Party has a mechanism to change leaders and that is the mechanism which I advise colleagues to use. In the meantime, the public would not forgive us if we left these Offices of State empty.”

MP for Tonbridge and Malling and chair of the Foreign Affairs committee, Mr Tugendhat’s stock has steadily risen in recent weeks.

In January, he became the first Tory MP to announce his intention to stand for leader should Mr Johnson leave office.

The former soldier said: “I think I’m making it pretty clear that I think that it’s up to all of us to put ourselves forward. And it’s up to the electorate, in the first case parliamentary colleagues, and in the second case the party, to choose.

Mr Tugendhat’s ambitions might not be supported by everyone in the party, but they could secure him a plum job in a future cabinet.

Nadhim Zahawi, the education secretary and MP for Stratford-on-Avon, could also step up to the top job.

He has positioned himself closer to the crown over recent days, after he stepped into Rishi Sunak’s shoes and became chancellor.

Astoundingly, just a day into his new job, he publicly called on Mr Johnson to step down saying that “the country deserves a government that is not only stable, but which acts with integrity.”

However his leadership chances might be tarred by the fact that he stepped up to defend Mr Johnson on Wednesday morning’s media round, before making an about turn later than afternoon.

He even recognised this in his public letter to Mr Johnson on Thursday, saying: “If people have thought poorly of me for that decision, it is criticism I am willing to shoulder.”

The former health secretary and Bromsgrove MP is also likely to campaign to become the future Tory leader.

His frontline political future was in doubt when he quit as chancellor in February 2020, just six months into the job, after No 10 told him to sack all of his advisers. But Mr Javid has bounced back since June 2021 as health secretary.

In the 2019 leadership contest, he proposed cutting the top rate of income tax and he was also reported last month to be among those against a windfall tax on oil and gas producers.

With some in the party calling for lower taxes, this could chime with Mr Javid’s instincts and help boost his chances.

In his resignation speech in the House of Commons on Wednesday, Mr Javid tried to portray himself as a man of integrity. He said: “I have concluded that the problem starts at the top and I believe that is not going to change and that means that it is for those of us in a position who have responsibility to make that change.”

Michael Gove was one of the most experienced ministers in Boris Johnson’s cabinet, before he was dramatically sacked on Wednesday for disloyalty.

Although he is a shrewd political operator, it is unlikely that he will throw his hat in the ring for new Tory leader.

He ruled out running against Boris Johnson in a potential leadership race in June and said it was a “mistake” for him to do so in 2016.

The levelling up secretary recently raised eyebrows during a bizarre BBC Breakfast interview when he used a Liverpudlian accent to suggest people should “calm down” over the lack of extra financial support before the autumn budget despite the mounting cost of living crisis.

The attorney general Suella Braverman has already put her name in contention for future Tory leader, saying she would run even before Mr Johnson had resigned.

She told ITV’s Robert Peston on Wednesday night: “The balance has tipped now in favour of saying that the prime minister – it pains me to say it – but it’s time to go.”

She has previously said that schools should not have to accommodate transgender pupils by addressing them by their prefered pronounds or allowing them to use gender-appropriate toilets.

Rebel Tory MP Steve Baker has also said that he is considering running in the future leadership race, suggesting that some individuals are “imploring” him to do so.

He told Times Radio on Thursday morning that “people do know that I am a leader, I have led and they know that the Conservative membership routinely puts me in the top 10 for next leader”.