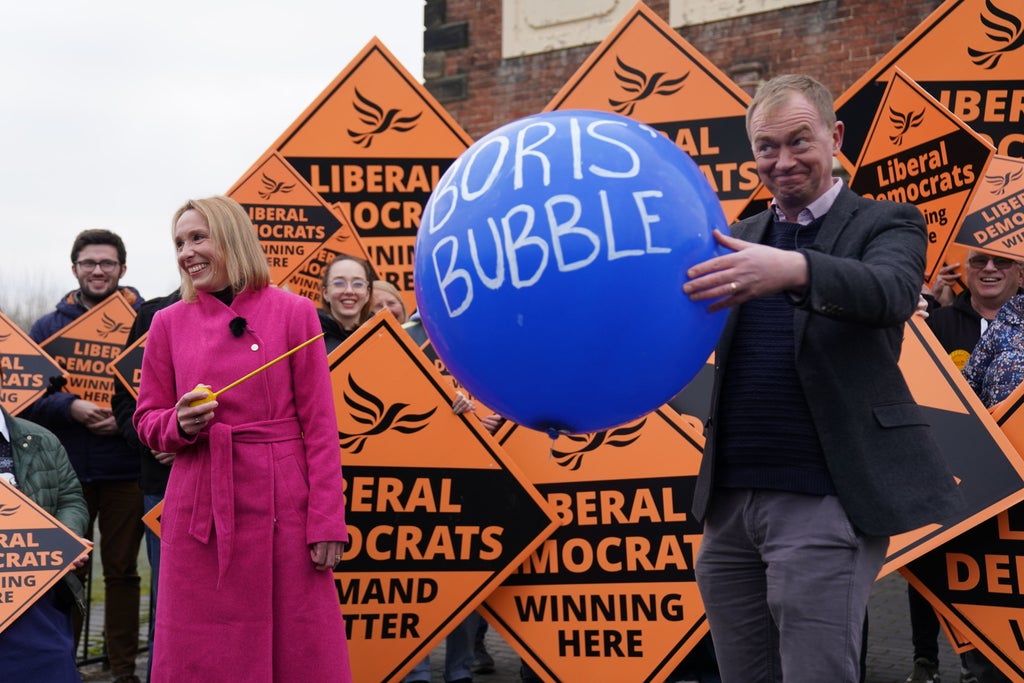 Furious Tory MPs have said that Boris Johnson must show “humility” in the wake of the devastating by-election loss in North Shropshire by making a public apology for the string of blunders which have shredded the party’s popularity.

One former cabinet minister told The Independent that the days of Johnson being able to stride unscathed through scandal after scandal were over, saying: “The Teflon has come off.”

While few MPs believe that the prime minister is facing an imminent leadership challenge, many believe that he has only a matter of months to improve his performance or be subjected to a determined bid to remove him.

Veteran backbencher Sir Roger Gale became the first to confirm he has submitted a letter of no confidence to the chair of the 1922 Committee, Sir Graham Brady, who will call a confidence vote if he receives requests from 55 MPs.

The North Thanet MP said the by-election result – which saw Liberal Democrats take North Shropshire from Tories for the first time in almost 200 years on a stupendous 34 per cent swing – must be seen as “a referendum on the prime minister’s performance”.

“The prime minister is now in last orders time,” said Gale. “One more strike and he’s out.”

“The party is looking for a bit of bloody grip to be exerted and if they see that they might hold off,” she said. “But I think the prime minister has been put on warning by his MPs.”

The PM said he took “personal responsibility” for the “very disappointing” result – the seventh-largest by-election swing in modern history – and said he would take action to “fix” the operation of his administration.

He is facing calls for a clear-out of an under-performing inner circle at Downing Street, with backbench dissatisfaction directed at chief of staff Dan Rosenfield, who was seen by some as lacking the authority to impose discipline on what one former minister described as a “very young and inadequate” No 10 team.

“There is a feeling widely shared in the parliamentary party that the No 10 operation is extremely poor,” the senior MP told The Independent. “He hasn’t got a good chief of staff with real authority, the holder of the post is essentially a civil servant. There’s a feeling that junior staff are getting away with murder, as we see with the reports of parties. A strong chief of staff would never have tolerated that – they’d have been out on their ear.”

Others said Mr Johnson needed to engage more closely with MPs and respond to their concerns.

One former minister said the “appalling” handling of the party reports reflected the complacent view of those around Johnson that his personal popularity made him immune to scandal.

“North Shropshire has shown that the Teflon has been stripped off the prime minister,” the MP told The Independent. “Until now, pretty much every crisis has been met with the idea that the normal rules don’t apply to Boris. That is not an approach that will work any more.”

Another senior MP said that voters in North Shropshire had sent the government the message: “Get your act together.”

It was not too late for Mr Johnson to win disgruntled voters back before the 2024 election, but he must make a public statement that things have changed, said the MP.

“The public will expect an apology at the very least,” the former cabinet minister told The Independent. “I think that is important.. It is a demonstration of humility, which I think the public would expect, given what we have all been through. The insouciant ‘nothing to see here’ line simply won’t wash any more. That humility has to be demonstrated in the next few months.”

One “Red Wall” Conservative MP told The Independent: “He’s lucky we’ve gone into recess so there’s no one in Westminster for three weeks. The mood is bad, but it would be even worse if people got together to talk.

“I don’t think there’s going to be any leadership push quickly. The people who already want Boris out will let him keep finding a bit more rope. It’s bad poll numbers that will rattle a wider group.”

Sir Charles Walker, the former vice chairman of the 1922 Committee, said Mr Johnson had “weeks, months, a year to sort himself out”.

“If we go on making unforced errors over the next three to six months or nine months, it will become a lot more serious,” he told Times Radio. “It’s serious now but it’s not at a critical level yet.”

“I want him to succeed, I am giving him the benefit of the doubt,” he told Sky News.

“But in doing that, as one of his seasoned backbenchers, I am asking him to think carefully how he governs the country and avoid these self-inflicted measures.”

Former Tory leader Sir Iain Duncan Smith called on critics of the PM to pipe down, insisting: “He is our leader, and he will lead us to the next election.”

But Sir Iain told the BBC that Mr Johnson needs to impose “structure and discipline” on his administration and be prepared to “get rid of people who are breaking the rules, so he can move on”.

“He needs to be out front as the great political salesman, not bogged down having to apologise,” said Duncan Smith.

While admitting his party had been given “a kicking”, he said the Tories had recovered before from mid-term by-election thumpings, saying: “It happens time and time again.”

Johnson himself admitted he had failed to stop “a constant litany of stuff about politics and politicians” from dominating the headlines in recent weeks.

“I totally understand people’s frustrations,” said the PM. “I hear what the voters are saying in North Shropshire. And in all humility, I’ve got to accept that that verdict.”

Liberal Democrat Helen Morgan won Thursday’s by-election by 5,925 votes, overturning a 22,949 Conservative majority from 2019 in a ballot triggered by the resignation of Owen Paterson after he was found guilty of sleaze. Had Mr Johnson not attempted to block Paterson’s 30-day suspension from the House of Commons, the punishment would have been completed on the day of the vote.

Former Lib Dem leader Tim Farron said that “millions of people have woken up this morning feeling a bit of light has broken into the darkness” thanks to the shock result.

“Democracy and justice is alive and well in Britain and the people of North Shropshire have spoken for the whole of Britain.”