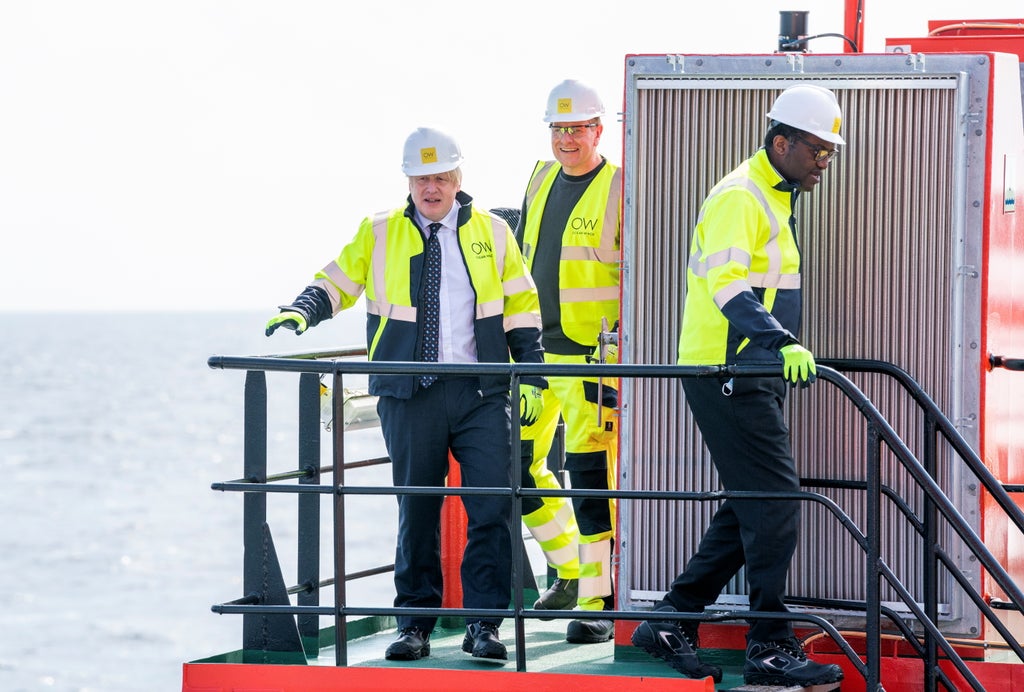 Boris Johnson was “wrong” to cast doubt on the effectiveness of wind farms in 2013 when he suggested they couldn’t “pull the skin off a rice pudding”, a cabinet minister has said.

It comes as Kwasi Kwarteng unveiled a £260 million public and private sector investment in offshore wind farms – forming part of plans to “eradicate” Britain’s contribution to the climate crisis.

On Monday, a group of leading climate scientists also warned the world will reach 1.5C above pre-industrial levels sometime over the next 20 years, with the risk of far greater global warming if little is done.

But the business secretary Mr Kwarteng faced questions on the controversial remarks made by Mr Johnson, who also argued that country should “look at” the opportunity of shale gas, while he was mayor of London in 2013.

“When he said that eight-nine years ago, clearly what he said was wrong,” Mr Kwarteng told LBC radio. “Wind farms, wind power contributes sometimes upwards of 40 per cent of electricity”.

“I think there’s been a huge change in the last eight years. I remember in 2012, 40 per cent of our electricity then basically derived from coal – today that figure is less than two per cent,” he added.

Quizzed again, Mr Kwarteng said: “As a politician, I look back on things I said eight/nine years ago that were wrong.”

Addressing his own comments at the Conservative Party conference in 2019, the prime minister accused his past self of “forgetting the history of this country”, as he offered a revised personal view of wind power.

“I remember how some people used to sneer at wind power, 20 years ago, and say that it wouldn’t pull the skin off a rice pudding,” he said.

“They forgot the history of this country. It was offshore wind that puffed the sails of Drake and Raleigh and Nelson, and propelled this country to commercial greatness.”

According to an analysis published earlier this year, nearly a quarter of the UK’s electricity came from wind turbines in 2020 and moved away from coal power at a faster rate than any other G20 country from 2015 to 2020.

Wing of Grade-II listed mansion with sauna and private lake goes on sale for £995,000

Wing of Grade-II listed mansion with sauna and private lake goes on sale for £995,000