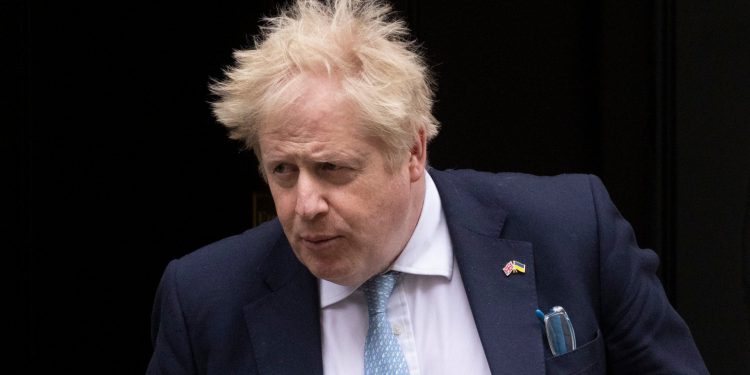 
Boris Johnson faced questions from MPs about the rise of living costs during Wednesday’s PMQs but it’s his nose that has shone in the spotlight on Twitter.

Johnson admitted the cost of living in the UK was “running too high” and was an issue “we have got to fix”.

But over on Twitter there was further debate about a dent that could be seen on Johnson’s nose – and many people threw their theories in the ring.

Boris Johnson’s nose left many Twitter users puzzled after they spotted a dent in it as he addressed fellow MPs in the House of Commons.

It appears the topic blew all over social media after journalist Adam Boulton shared a screengrab from PMQs and asked: “Anyone know what ⁦@BorisJohnson⁩ has done to his nose?”

“I can’t stop looking at Boris Johnson’s nose?” tweeted another user. “What happened to his nose?”

“What on earth has happened to Boris Johnson’s nose?” Ed McConnell asked.

It seems Johnson has been bearing the scratch on his conk for some time, however, as one Twitter user noted the PM had it during last week’s PMQs.

It isn’t clear what has happened to Johnson’s nose but he had a similar gash when he visited the BBC World Service studios in London in 2018.

At the time, the PM was understood to have received the scratch while playing tennis the weekend before the snap was taken.

Johnson is a keen tennis fan and is known for his long-running friendly rivalry with former prime minister David Cameron.

While Johnson hasn’t talked about his scratch this time, it could well be the result of a sports injury.

In other news, What is the map trend on TikTok? Latest internet craze explained

Dog Spotted Outside Store All Alone, With A Sign Around His Neck

Dog Spotted Outside Store All Alone, With A Sign Around His Neck