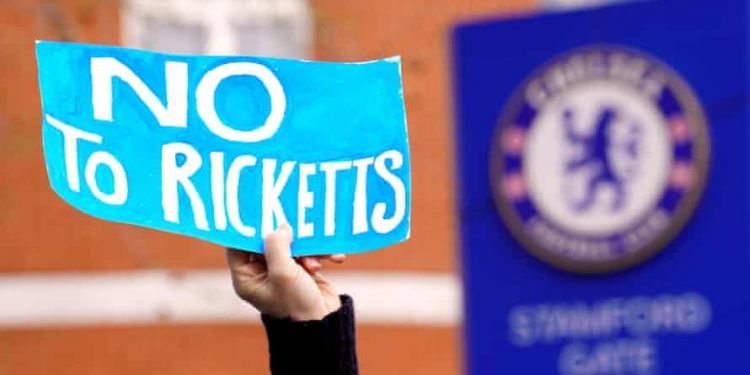 
Stephen Pagliuca, the co-owner of the Boston Celtics basketball team, has confirmed his interest in buying Chelsea, insisting his takeover would ensure the club continued competing for major honours, would never again try to join a European Super League and would remain at Stamford Bridge.

Pagliuca’s bid for Chelsea was included on a shortlist of possible takeover options for the club by Raine Group, the US bank handling the sale, last month but little has been heard from the American, who is co-chairman of Bain Capital, a private investment firm. He has now decided to make his intentions clear ahead of submitting a formal bid for Chelsea prior to Thursday’s deadline.

In a statement, the 67-year-old said: “This process has been a disconcerting time for the club and fans. Throughout my life and career, my ethos has always been to operate quietly, with integrity, and let my actions and results speak loudly. However, it is imperative to clarify and assure supporters about our bid group and its commitments, to emphasise how seriously we take our potential responsibility to Chelsea.

“Our first focus and goal is to make strategic investments to continue competing for championships and trophies. We will support our players and managers to make sure that Chelsea are habitual winners and title contenders, whether in the Premier League, Champions League or the Women’s Super League [the only Super League we intend competing in, for the record]. In addition, we will continue to invest in the youth academy to develop the stars of the future and we would not be in this process if we did not have an exciting and inclusive vision for Chelsea.

“Our second focus will be to continue to cherish and preserve the legacy and traditions of the club. In over 20 years of ownership of the Boston Celtics, we have not once considered changing the name, colours, or logo of the club. This is our guarantee to Chelsea fans. Not only are we committed to remaining at the home of Chelsea, Stamford Bridge, but we are inspired to renovate or redevelop the stadium. Chelsea is a world-class team, in a world-class city, with world-class fans: it deserves a world-class stadium.”

Pagliuca’s consortium, which is believed to also include Larry Tanenbaum, chairman of the NBA, is complicated by the fact he and a group of co-investors recently purchased a 55% controlling stake in Italian club Atalanta – under Uefa rules, two clubs directly or indirectly controlled by the same entity cannot be involved in the same competition, so were a Pagliuca-owned Chelsea and Atalanta to both qualify for next season’s Champions League, one would have to drop out.

Pagliuca has, however, made clear he will follow all required rules and regulations to ensure his bid for Chelsea can proceed and be successful. “We will submit a substantial and credible bid proposal – one that we expect will meet the respective requirements and regulations of the Premier League, UK Government and Uefa,” he added in his statement. “We pledge to honour our commitment to credibility and good guardianship of Chelsea Football Club from day one.”

The other three contenders to buy Chelsea are a consortium led by LA Dodgers part-owner Todd Boehly, one led by British businessman Sir Martin Broughton and Lord Sebastian Coe, and the Ricketts family, who own the Chicago Cubs baseball team and have faced a backlash over their desire to buy Chelsea due to accusations of Islamophobia levelled at Joe Ricketts, the family’s patriarch. The Chelsea Supporters’ Trust have publicly voiced concerns about a Ricketts takeover, which has been followed by a fans’ protest outside Stamford Bridge prior to the recent Premier league defeat to Brentford.

In response, the Ricketts family has said it “rejects any form of hate in the strongest possible terms” and on Tuesday confirmed that if its bid was successful, Lord Karan Bilimoria, a Chelsea fan and founder of Cobra beer, as well as outgoing president of the Confederation of British Industry (CBI), would have a seat on the board.

“I founded Cobra Beer just down the road from Stamford Bridge and have been a season ticket holder for many years,” said Bilimoria in a statement. “So when Tom Ricketts approached me to discuss a leading role in his bid group, there was no way I could refuse. Tom and the wider group have a proven track record of running successful sports teams and a strong vision for both the club and the local community.”

Roman Abramovich, Chelsea’s owner since 2003, put the club up for sale on 2 March in response to Russia’s invasion of Ukraine. The 55-year-old was then sanctioned by the government on 10 March, with Downing Street claiming to have proven his links to Vladimir Putin.

Chelsea have been granted a special licence to continue operating, though under strict terms, with Abramovich unable to profit from Chelsea’s sale. He has vowed to write off the club’s £1.5bn debt.