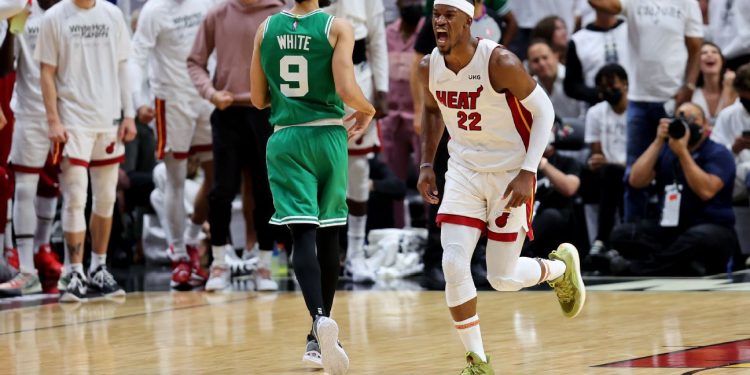 MIAMI — The Boston Celtics exited their locker room at halftime Tuesday night in control of Game 1 of the Eastern Conference finals.

But then the third quarter happened. And, after the Miami Heat demolished the Celtics, outscoring them 39-14 and using their physicality to send Boston into a death spiral of miscues and unforced errors, the Heat were on their way to a 118-107 victory to take the opening game of this best-of-seven affair.

“More than anything, it just shows us what we are capable of whenever we worry about getting stops, getting into the open floor, getting to the free throw line, all those good things,” said Jimmy Butler, who led the way for Miami with his latest spectacular performance in these playoffs, finishing with a game-high 41 points — including 17 in that decisive third quarter — nine rebounds and five assists in 41 minutes.

“It just reminds me, we can do it. I see it on this piece of paper. I lived it. So I expect us to do that every quarter from here on out.”

That’s a high bar to live up to. Miami pummeled Boston into submission in the third to the point where the Celtics played not only their worst 12 minutes of these playoffs so far — but one of the worst quarters Boston has had, period.

“[We] got out-toughed, out-physicaled,” Celtics coach Ime Udoka said. “They looked like they came out in the second half and wanted to up their physicality and aggression on both ends, and they did that.”

Here’s a sampling of the disastrous statistics dredged up by that quarter:

All of it was enough to add up to the fact that, despite losing the first, second and fourth quarters, Miami finds itself up 1-0 in this series.

“The guys were just really disappointed at halftime,” Heat coach Erik Spoelstra said. “I barely needed to say anything. Everybody was just disappointed at our defensive effort and focus. But look, this is a very good team that we’re playing against. So it’s not only us saying that, hey, we have to do that better. They are putting a lot of pressure on our defense, and that’s what you expect when you get to this level.”

The Heat needed to have that kind of reversal after Boston had controlled the first half with relative ease. Coming off a seven-game slugfest with the defending champion Milwaukee Bucks — a series Boston closed out in emphatic fashion on its home court in Game 7 — the Celtics appeared to carry that momentum into the first half of this game. The Celtics staked themselves to a 62-54 first-half lead, led by 21 points from Tatum. They shot 59% from the field.

In that first half, Tatum had 16 paint points — tied for the most he’s had in any half in his career — as Boston outscored Miami 42-24 in the paint.

But just as Tatum’s play was emblematic of Boston’s strong first half, his horrendous third quarter was a symbol of Boston’s absolute collapse after the break. Tatum scored two points on 1-for-7 shooting in the second half, in addition to those six disastrous turnovers in the third quarter. Miami got three straight pick-6 turnovers it turned into layups or dunks that blew the game open as part of a 22-2 run to start the second half that gave the Heat the lead for good.

“I think obviously I don’t want to turn the damn ball over and s— like that,” Tatum said. “But I guess throughout the course of a game, things happen, and they go on runs. That’s what they did.

“Throughout the course of the playoffs, we’ve done a great job of responding to runs after calling timeout, things like that. But for whatever reason we didn’t today. I’ll be the first one to say I’ll take the blame for that. I’ve got to lead better. I’ve got to play better, especially in those moments. I’m just looking forward to responding next game.”

Boston will hope to respond in Game 2 with Marcus Smart in the lineup. Smart gave the team a rousing speech on the bench to try to turn things around after that ugly third quarter, but that was all he could do as he sat out with a right midfoot sprain.

Not only was Boston missing Smart, who had been questionable all day to play, but it also was without Al Horford, who was a surprise entrant into the NBA’s health and safety protocols a couple hours before tipoff, and who is unlikely to return until at least Game 3.

“We still had control of the game in the first half. We lost control in the third quarter. We’ve just got to be better. Got to play better on both sides of the ball, more discipline. We fouled entirely too much, and we let the game slip away from us. That’s the story.”