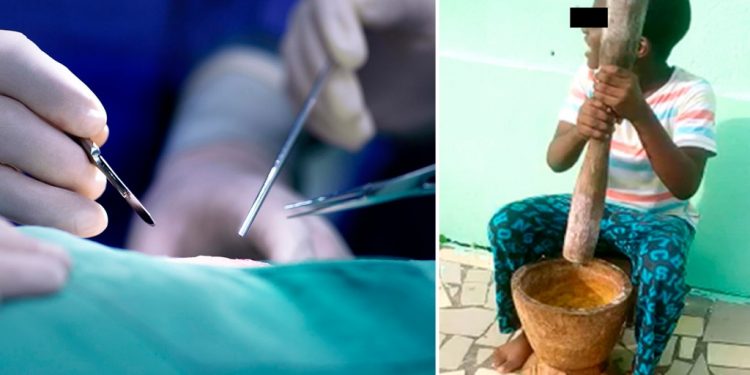 
A 9-year-old boy has partially amputated his own penis while crushing up vegetables with a mortar and pestle.

The castration catastrophe occurred in the Central African nation of Gabon, according to Urology Case Reports, which published a medical study detailing the event.

The date of the disaster was not disclosed, but the injured youngster did not seek treatment for three hours after sustaining the “traumatic penile injury.”

The bludgeoned boy presented at the hospital with a compressive bandage soaked in blood and was quickly rushed into the operating room. Doctors described his demeanor as “anxious.”

The male’s mangled manhood was examined by medics, who found that he had partially amputated his penile glans and completely ruptured his urethra — the duct which transmits urine from the bladder.

Incredibly, doctors managed to save the patient’s penis, cleaning the wound and sewing the head back on.

However, he subsequently suffered a severe infection that caused his nether regions to swell up and the stitches on the penis to come loose.

He was given antibiotics, and the infection eventually disappeared. After a 25-day stay in the hospital, the boy was able to return home.

According to the medical study, the youngster returned for a checkup a year later and his penis was in perfect condition.

“There is no longer any local inflammatory phenomenon, no urethral stricture and painless and aesthetically acceptable healing,” the report read.

The study states that penile amputations are incredibly rare, although they are not unheard of.

In Brazil, President Jair Bolsonaro stated back in 2019 that 1,000 men have their penises amputated in his country each year due to a lack of basic hygiene.

Meanwhile, British man Richard Stamp was forced to have his member cut off after being diagnosed with penile cancer in 2018. But while he may have lost his dong, Stamp gained stardom, appearing in his own docuseries “Shopping for a New Penis,” which was released in 2020.