BP ramps up spending on green energy: Oil giant to devote half of its budget to wind and hydrogen by 2030

BP will ramp up spending on green energy after raking in its highest profit for eight years as oil and gas prices boom.

It also targeted a 50 per cent cut to emissions from its operations by the end of the decade, an increase on the previous target of 30-35 per cent. 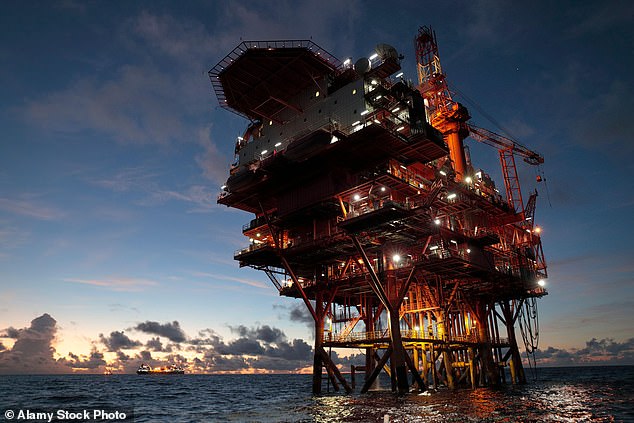 Laura Hoy, analyst at Hargreaves Lansdown, cautioned that while BP’s aggressive clean energy plans could be a ‘huge advantage’, they also risked becoming ‘somewhat of a money pit’ if it failed to get its transition right.

The accelerated push for green energy came as BP posted profits of £9.5billion for 2021, triggering fresh calls for a windfall tax on oil and gas giants after Shell last week reported £14billion of profits.

But BP chief executive Bernard Looney said: ‘I don’t think a windfall tax is going to incentivise people to invest.’

Around £3billion of BP’s haul came in the fourth quarter of last year when gas prices rocketed to record levels thanks to low stockpiles, a slowdown in deliveries from Russia and surging demand.

The figure marked a sharp rebound from 2020, when lockdowns caused fuel demand to plunge and sent BP tumbling to an annual loss of £4.2billion.

The company also unveiled plans to return an extra £1.1billion to investors through a share buyback, on top of a previous £1.3billion doled out in the fourth quarter.

Its dividend for the final three months of the year was raised to around 4p per share from 3.9p in the same period a year ago. ‘2021 shows BP doing what we said we would – performing while transforming,’ said Looney (pictured). 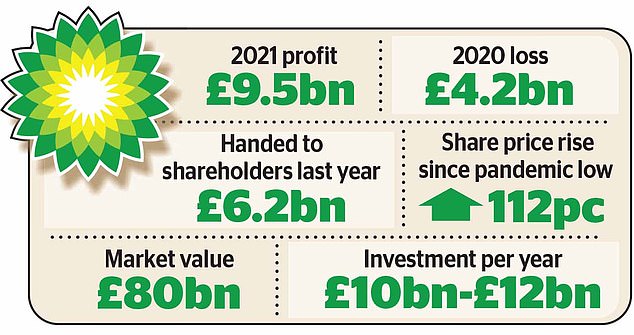 Debt fell by £6billion to £22.6billion. Its strong performance followed a similarly stellar year for Shell, where the £14billion profit in 2021 was the company’s highest in eight years. It promised to buy back another £6.2billion in stock and raise the dividend.

The profit surge has boosted pension funds and savers, many of whom hold BP and Shell in their portfolios, as global oil prices hover around a seven-year high following the reopening of the global economy, which caused fuel demand to soar.

Prices of Brent crude, an international oil benchmark, climbed above $93 a barrel last week for the first time since 2014, and are up around 50 per cent in the last year.

However, the mammoth profit hauls have increased calls for a windfall tax on the oil giants as British household budgets come under strain amid surging inflation and escalating energy bills.

Labour and Liberal Democrat MPs are among those arguing that a windfall tax will ease the impact of the cost of living crisis.

Ed Miliband, shadow secretary of state for climate change and net-zero, tweeted that BP’s results demonstrated a windfall tax was ‘fair and right’, and Liberal Democrat leader Sir Ed Davey told the BBC it would ‘restore some trust and proportionality and … fairness back in the system’.

However, the Government has resisted the idea, with Chancellor Rishi Sunak opting for a £9billion package that included council tax rebates and a discount on energy bills that will be repaid over five years, to spread the cost of the price crunch.

UK consumers are also facing higher prices of food and other essentials after the Bank of England predicted inflation will hit 7.25 per cent in April, its highest level for 30 years.

How does Norway dominate the Winter Olympics medals table?

Put Doctor Strange and the Scarlet Witch on trial

Put Doctor Strange and the Scarlet Witch on trial