Brad Raffensperger defied Trump. Georgia voters rewarded him for it. – The Washington Post 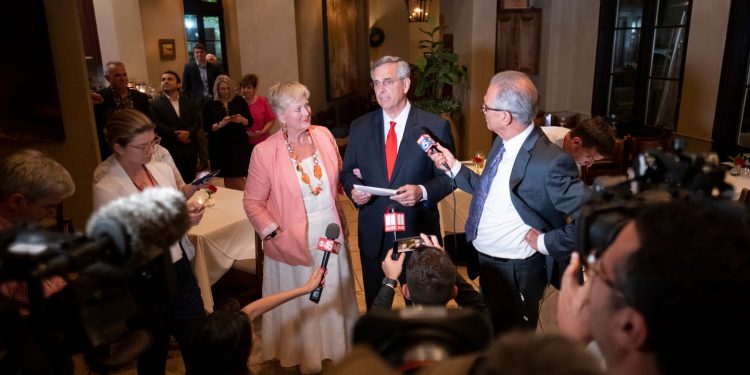 PEACHTREE CORNERS, Ga. — Last spring, Georgia Secretary of State Brad Raffensperger was ready to launch his 2022 reelection campaign. He wanted to start by meeting with every county Republican committee in the state.

Raffensperger had lost favor with a broad swath of Georgia Republicans after refusing former president Donald Trump’s demands that he reverse Joe Biden’s 2020 win. An internal GOP poll showed that he could lose by as many as 40 points in a party primary.

On Tuesday, Raffensperger defeated his Trump-backed opponent, U.S. Rep. Jody Hice, by nearly 19 points. He did it by closing the gap among Republican voters, attracting Democrats who had celebrated his decision to uphold the law and, with 52 percent of the vote in a four-candidate field, avoiding the runoff that even his allies were predicting just days ago.

Raffensperger, 67, won in part by courting Trump’s base with promises of stricter election security. But he also won by not trying to hide from his role in 2020: A plain-spoken structural engineer, he repudiated Trump’s false claims of election fraud to anyone who would listen.

His victory Tuesday seemed to embolden him to offer an even more direct rebuke of the former president.

“The vast majority of Georgians are looking at honest people for elected office,” he told a clutch of cameras at his election night party in the northeastern suburbs of Atlanta late Tuesday. “Someone who would do their job, follow the law and look out for them regardless of the personal cost to do so.”

His main opponent, Hice, did not hold a public event or issue a public concession Tuesday.

Trump, in a statement on the social media site Truth Social, trumpeted victories for his preferred candidates in Arkansas, Alabama, Texas and in the Senate contest in Georgia. The former president omitted any reference to Raffensperger or Georgia Gov. Brian Kemp, who also resisted Trump’s 2020 pressure.

Defeating Raffensperger and Kemp had become an obsession for the former president, one displayed frequently both in public and behind closed doors, according to those in Trump’s orbit. But Kemp cruised to victory Tuesday over the Trump-backed former senator David Perdue by an astonishing 52 points.

Donald Trump recalibrates his standing in GOP after primary setbacks

Raffensperger’s path to redemption among Republican primary voters began about a year ago, when he received a rare invitation to speak from a local Republican Party chairman in Ben Hill County, about three hours south of Atlanta. Trump had won the county with 63 percent of the vote in 2020.

More than 100 Georgians packed into the Grand Theatre in Fitzgerald, the county seat. Raffensperger learned later that some had driven hours to hear him speak — not because they were admirers, but because they believed he had failed to uncover the fraud that Trump falsely claimed had fueled Biden’s victory.

He told them that night that they did not have the facts. “Simply stated, what happened in 2020 is that 28,000 Georgians skipped the presidential race” while voting in races down-ballot, he recalled telling the crowd, in a speech that he would deliver again and again over the following year. “You have to share the facts, and then they have to understand that I do have the facts.”

Raffensperger put 40,000 miles on his Ford F-150 pickup truck, crisscrossing the state to speak to anyone who would listen. Early this month, he drove nearly four hours to Savannah for a Rotary lunch — and stayed the rest of the afternoon for a meet-and-greet with just over a dozen members of the local Jaycees.

The miles paid off: Raffensperger racked up huge margins in Metro Atlanta, but he also held his own across the state. He defeated Hice by more than 20 points in the congressional district of pro-Trump firebrand Marjorie Taylor Greene. Hice scored some of his biggest wins in his own congressional district, but the numbers were too low to affect the margin.

“It’s a comeback for the ages and a testament to an official who accepted every invitation from any group in the state or media outlet and kept telling his story,” said Brian Robinson, a Georgia-based Republican strategist, whose firm consults on communications for the secretary of state’s office but was not affiliated with any of the campaigns.

Even in Ben Hill County, where all those Trump supporters had gathered last year to demand answers from Raffensperger, he won 50 percent of the vote. That news astonished Austin Futch, the GOP chairman who had invited Raffensperger to speak — and had lost his leadership post as a result.

“Up until this morning I wouldn’t have dared tell anyone that I supported Raffensperger,” Futch, a Realtor, said in an interview Wednesday. “But yes, I feel like I have a pretty good reason to say it now. Georgia has issued a referendum on Donald Trump, and it is to stay out of Georgia. Donald Trump lost in 2020. And he needs to accept that fact.”

In the weeks following the 2020 election, Raffensperger and his top aides received death threats from Trump supporters. His wife, Tricia, fielded obscene text messages. Someone broke into the home of his daughter-in-law. At Tuesday’s party at a cozy suburban restaurant, two off-duty Gwinnett County police officers stood at the door, hired by Raffensperger as a precaution.

Those threats only made him more certain of his decision to defend the election results, Raffensperger said. He brought a steadiness to his predicament that he cultivated over decades designing high-rises and bridges and post-tensioned box girders, but that also reflects a far more searing experience four years ago — the death of his elder son from a fentanyl overdose.

“I understand what I can change and what I can’t change,” Raffensperger said. “You’ve got all these people spreading their deceit and misinformation, but it’s not supported by the facts.”

Whether Raffensperger and Kemp have provided a blueprint for other Republicans elsewhere in the country to defy Trump remains unknown. Both officials are longtime Republicans who served in the legislature and have extensive records supporting conservative causes. They are well-known in Georgia, and they came to this year’s election with name recognition and the ability to raise millions of dollars. Raffensperger, the founder of a lucrative engineering firm, poured in some of his own funds, as well.

In an interview Tuesday night, Raffensperger said he had prepared four different sets of remarks for the evening: one if he won, one if he lost, one for a runoff if he placed first, and one for a runoff if Hice did. He wasn’t pessimistic, he said — just practical. He’d put the victory speech in his left lapel pocket, alone and most easily retrievable.

He still doesn’t know which Democrat he will face in the fall because that primary is headed to a runoff. Democrats have accused Raffensperger of enabling election conspiracists by supporting a strict new voting law last year and championing efforts to reduce noncitizen voting.

Bee Nguyen, a Democratic state lawmaker and the front-runner for the nomination, has campaigned heavily on the idea that democracy is on the ballot in November. But that message will be more complicated against Raffensperger than it would have been against Hice, who boasted that he would not have certified Biden’s Georgia victory.

Raffensperger said he is unlikely to change his message for the general election. He also offered a glimpse of a potential next ambition, one that seemed out of reach just a few months ago: to run for Georgia governor. “My runway is short,” he joked, having recently celebrated his 67th birthday.

“What I have found is that every Georgian wants safe, secure elections, with the right balance of accessibility with security,” he said. “That’s where Georgia voting is today.”

Lenny Bronner in Washington contributed to this report.