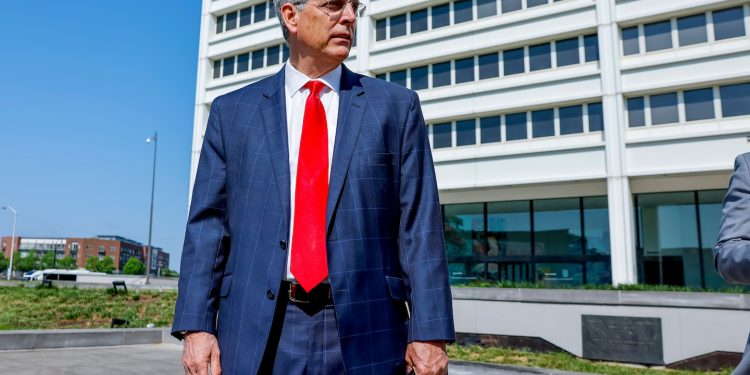 SAVANNAH, Ga. — When Georgia Secretary of State Brad Raffensperger (R) addressed the local Rotary Club here this month, he eagerly reminded the audience that he was the guy who resisted former president Donald Trump’s pleas to find enough votes to reverse the 2020 election.

As the Rotarians lunched on chicken pot pie, the Republican ticked through the “rumor whack-a-mole” of fraud allegations that had surfaced in Georgia and explained why they were false.

But in the next breath, the state’s top election official offered Trump voters concerned that elections could be compromised reasons to vote for him in Tuesday’s hotly contested primary: He supported legislation to tighten up the security around balloting — despite resistance from voting rights groups — and has made cracking down on noncitizen voting the No. 1 issue of his campaign, even though the evidence shows it is already quite rare.

That dual message reflects the delicate balance Raffensperger is trying to strike to win in a state where most Republicans still love Trump and believe his false narrative about the 2020 election. Squaring off against an ardent Trump acolyte, Raffensperger has chosen the path of political pragmatism, courting the former president’s base while not completely abandoning his image as the rare Republican willing to take Trump on.

Whether Raffensperger can pull it off could help set the direction for the Republican Party at a time when Trumpism remains very much alive even as Trump himself is struggling to propel his preferred candidates to victory. The outcome will also bear directly on the 2024 presidential vote, when Georgia is again expected to be a key battleground and the secretary of state will have oversight over how votes are cast, counted and certified.

With just days to go before the election, polls suggest an extremely close contest. That reflects a remarkable evolution from a year ago, when Raffensperger was widely seen as politically dead following his showdown with Trump.

“The fact that it’s competitive is a monumental shift in the environment,” said Brian Robinson, a GOP political consultant in the state, noting that many Republican voters are tired of Trump’s election claims whether they like him or not. They want to hear about solutions to inflation and rising gas prices, not about the previous election, he said.

Raffensperger shot to prominence following a Jan. 2, 2021, phone call with Trump in which the then-president urged him to “find” enough votes to reverse his defeat in Georgia.

Throughout the hour-long call, as Trump alternately berated Raffensperger, tried to flatter him, begged him to act and threatened him with vague criminal consequences if he refused to pursue his false claims, Raffensperger stood firm, explaining that the president was relying on debunked accusations and that Joe Biden’s 11,779-vote victory in the state was fair and accurate.

“Well, Mr. President,” Raffensperger said on the call, “the challenge that you have is, the data you have is wrong.”

In the months that followed, few if any strategists in Georgia said Raffensperger could survive a Republican primary. He had been anointed a hero on the left and shot to near the top of Trump’s enemies list. Many Republican voters wanted someone to blame for Trump’s loss, and Raffensperger became the target.

His top competitor in the primary is U.S. Rep. Jody Hice, a full-throated Trump supporter who earned the former president’s endorsement after embracing the false claim that Biden did not really win Georgia. Hice’s central argument to voters is that if he had been secretary of state in 2020, he would not have certified the presidential result, as Raffensperger did.

“This last election should not have been certified without proper investigation,” Hice said during a May 2 televised debate with Raffensperger and two other candidates. “The allegations were tremendous. They were all over the place and they still are.”

On Thursday evening, Hice told a gathering of the Atlanta Young Republicans that the “voice of the people” had been “violated” in 2020, and he held Raffensperger responsible for not being tough enough in enforcing the law.

In an interview with The Washington Post, he cited allegations of widespread “ballot harvesting,” or residents illegally turning in other people’s ballots. Some of those allegations were dismissed by the Georgia State Elections Board this week.

“If there are no consequences for breaking the law and cheating people will continue to cheat when it comes to elections,” Hice said. “There must be consequences.”

Yet it is unclear whether Georgia Republicans have been persuaded by Hice’s argument. Polls show the Trump-backed candidate for governor, former senator David Perdue, well behind the incumbent, Brian Kemp, who also became an object of the former president’s ire for refusing to go along with false fraud claims.

In polling published last month by the Atlanta Journal-Constitution, Raffensperger and Hice were roughly tied, with more than 35 percent of likely GOP primary voters saying they were still undecided.

Some Republicans remain skeptical that Raffensperger will eke out a win May 24. But more and more say they believe he will at least qualify for a runoff with Hice in the four-way race should no candidate garner the majority required for an outright win.

Both Raffensperger and Hice have undergone transformations since the start of their political careers. Raffensperger, the soft-spoken owner of a lucrative engineering firm who seems more comfortable talking about building structure than giving rousing speeches, started on the city council in the Atlanta suburb of Johns Creek in 2011. There, he focused on such bread-and-butter priorities as streetlights and sidewalks.

Later, in the state legislature, Raffensperger developed a reputation as a conservative Reagan-style Republican, focused on low taxes and streamlining regulations. In 2018, he was cited by the Faith and Freedom Coalition of Georgia for a perfect conservative voting record. That same year, he was elected secretary of state. His life changed two years later, when he found himself in Trump’s crosshairs.

Hice entered Congress in 2015 after a 25-year career as a Baptist minister. At first, he focused almost exclusively on social issues, regularly criticizing same-sex marriage and even extolling the benefits of conversion therapy, the discredited practice of “converting” people to heterosexuality. He also took on the IRS over threats to strip churches of their tax-exempt status if ministers preached about politics from the pulpit.

With Trump’s rise in 2016, Hice became an ardent surrogate for the candidate. Following the 2020 election, Hice was one of the loudest voices in Congress to advocate for overturning the election result. On Jan. 6, 2021, he was among 147 members of Congress to object to the counting of electoral college votes.

That loyalty to Trump remains a positive quality for many Georgia Republicans, who question whether Raffensperger shares it.

“The election was stolen the last go-round by extremely smart people,” said Anne Cooper, 60, a Republican voter in rural Griffin, Ga., an hour south of Atlanta. “I think Raffensperger could have been more diligent getting into the computer system. I don’t think he did everything that he could.”

On the campaign trail, Raffensperger is unafraid to blame Trump directly for his 2020 defeat. “Twenty-eight thousand Georgians skipped the presidential race, and yet they voted down ballot in other races,” Raffensperger told the Savannah Rotary. “Republican congressmen collectively got 33,000 more votes than President Trump. And that’s why President Trump came up short.”

Many Republican voters interviewed at polling locations this month said that they believe fraud tainted the 2020 election and that they like Trump, yet they are exhausted by his singular obsession with it and are ready to move on. Raffensperger and Kemp are also attracting moderate Republicans in the Atlanta suburbs who are no fans of the former president.

Outside the Dunwoody Library in DeKalb County, one of the few remaining Republican enclaves in suburban Atlanta, voters casting early ballots said they were opting for Raffensperger and Kemp. Over three hours, not a single voter among dozens interviewed said they were voting for Hice or Perdue.

“I think the election was stolen, I definitely do,” said Virginia Christman, 72, who is retired from the magazine publishing industry. “But I don’t think Brad Raffensperger or Brian Kemp could have done anything about it. There was a lot of cheating going on that they got blamed for.”

In late March, Trump held a rally in rural Commerce, Ga., in which he touted Hice. More recently, the former president hosted a Hice fundraiser at Mar-a-Lago, his club in south Florida.

But Hice is not running ads and regularly goes days at a time without campaign appearances, giving Raffensperger the opportunity to define the four-term congressman in a seven-figure ad campaign airing across the state — a remarkable sum for what used to be a sleepy, down-ballot position.

“When Stacey Abrams attacked Georgia’s elections, Jody Hice did nothing — not a single bill to protect our elections,” states one of Raffensperger’s ads, referring to the presumed Democratic nominee for governor. “Brad was the first to do a full audit to make sure only Americans vote in Georgia. Brad outlawed ballot harvesting and required photo ID in all elections. When Jody did nothing, Brad made Georgia’s elections the safest in the nation.”

Turnout thus far has been heavy, which may be good news for the incumbent. This week, Raffensperger’s office announced that more than 600,000 Georgians had cast ballots so far in early and mail voting — more than triple the number over the same period in the 2018 primary and, remarkably for a nonpresidential year, nearly triple the number in 2020.

“It appears the electorate is going to be historically large,” said Robinson, the GOP consultant. “I would say the bigger the electorate, the more competitive Raffensperger is because a smaller electorate is more ideologically driven and therefore more driven by Trump’s narrative on the stolen election.”

There is also strong evidence that at least some Democratic voters are crossing over to vote in the Republican primary this year. More than 15,000 voters who have previously cast ballots in Democratic primaries have chosen the GOP ballot so far in early in-person voting, which began May 2 and concludes Friday, four days before Election Day.

Antoinette Jordan, the poll manager at a voting center at Emory University in Atlanta, said at least a half-dozen voters had asked her if they could vote in the Republican primary but still vote Democratic in the fall. When she told them they could, they asked for a GOP ballot, she said.

“Georgia is in a very precarious place right now,” said Yvette Barton, 52, a Democrat who works in sales support in Decatur and who considered voting in the GOP primary but ultimately stuck with her preferred party, where five candidates are vying for the secretary of state nomination. “We can’t afford candidates supported by Trump.”

In an interview following his Rotary appearance in Savannah, Raffensperger downplayed the significance of crossover votes. “I’m talking to Republican voters,” he said. “This is a decision for Republicans to make.”

Yet he also acknowledged the tension inherent in his campaign message.

“I’m looking down that thin, red, white and blue line of integrity that all election officials need to walk,” he said. “I have conservative principles, but also I believe you have to have rules, and then you have to follow the rules.”

Alice Crites in Washington and Matthew Brown in Atlanta contributed to this report.

Johnny Depp associates testify about challenges working with him - CNN