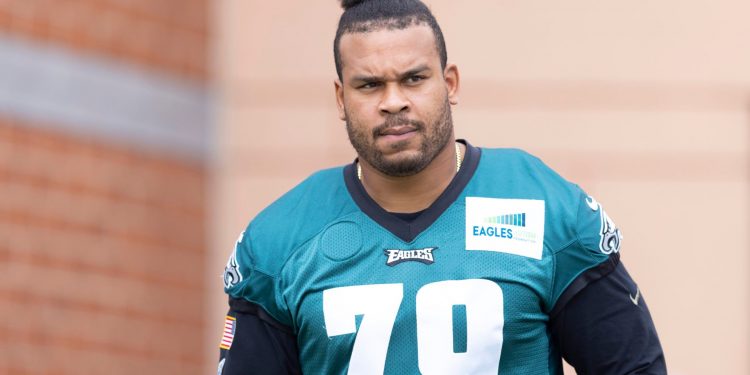 
Philadelphia Eagles star Brandon Brooks announced his retirement on Wednesday, January 26. We take a look at the three-time Pro Bowl right guard’s salary and net worth.

In his retirement announcement posted on social media, Brandon claimed that he’ll be an “Eagle forever”.

According to NFL Media’s Mike Garafolo, the Eagles star had recently signed a new contract that ‘reduced his 2022 salary’.

What is Brandon Brooks’ salary?

As per NFL reporter Mike Garafolo, the new contract reduced Brandon’s salary cap from $19.4 million to $7.1 million, meaning the 2022 arrangement reduced his pay by an eye-watering $12.3 million.

According to NJ.com, Brandon was initially set to make $13.4 million this NFL season, but had ‘no guaranteed money left on his previous deal.’

The NFL veteran, who joined the Eagles in 2016, signed a four-year, $56.3 million contract extension in November 2019. However, due to several injuries, he was only able to play nine regular-season games since penning that deal.

Brandon will remain an active part of the team until June 6, as a part of the financial agreement.

After spending ten rigorous years in the game, Brand Brooks’ net worth is estimated to be somewhere between $10 million and $20 million.

During his 10-year career with the NFL, the footballer played 114 games, 108 of which came from the start.

Despite the road bumps along his journey with the Eagles, Brandon started 62 regular-season games in his first four seasons with the team.

Brandon took to his socials on Wednesday to announce his retirement from the sport. The star wrote: “Yes, after ten years in this game, it’s true. I am retiring.”

The news was accompanied by a huge message that saw the footballer thanking everyone who had been a part of his journey.

He also wrote: “These past six years I wouldn’t trade for the world. I attacked my rehab with the passion and intensity I always do, but making it back just wasn’t on the cards.”

Detailing his emotions about his retirement, Brandon added: “It didn’t end the way I would have liked it, but to me, it’s never about the ending. It’s about the journey.”

The star also tagged the Philadelphia Eagles team, Miami University and Miami Redhawks among others in the caption.

In other news, Did Hudson Madsen have a wife at the time of his death?

Here’s how painful the economic loss will be for the U.S. from unchecked climate change: Deloitte

Chico Has Recovered With Your Help!

Chico Has Recovered With Your Help!

From red swimmers to floating teapots