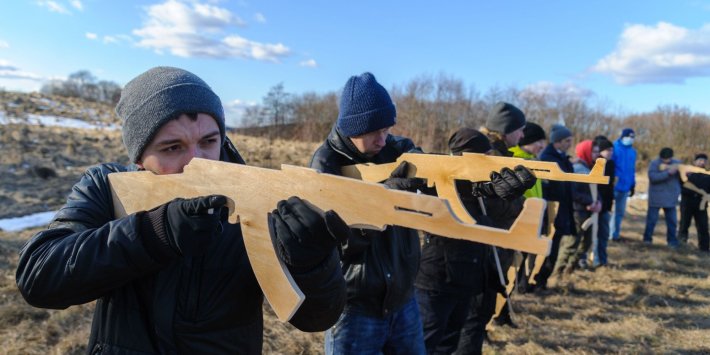 Northern Ireland secretary Brandon Lewis said the UK is focused on a “diplomatic solution” to Russian aggression against Ukraine as he confirmed British troops will not be sent to the region.

But he added that “there won’t be troops on the ground from the UK forces,” despite international concern that a Russian invasion of Ukraine is imminent.

And, speaking to Sky News’ Trevor Phillips, Lewis warned that such an attack was now “entirely possible” and that the government was being “realistic” about the prospect of an “imminent incursion”.

It comes after defence secretary Ben Wallace told the Sunday Times that Moscow could “launch an offensive at any time”, with an estimated 130,000 Russian and considerable weaponry now amassed on the border.

“The worrying thing is that despite the massive amount of increased diplomacy, that military build-up has continued. It has not paused, it has continued.”

Wallace added: “It may be that [Putin] just switches off his tanks and we all go home but there is a whiff of Munich in the air from some in the West.”

Pushing for a diplomatic solution, Labour’s shadow home secretary Yvette Cooper urged the government to focus on a “very strong and united response to this Russian belligerence”.

“It is immensely serious and nobody should be naive about what Russia is up to and the scale of the troops massing on the Ukrainian border,” Cooper told the BBC.

“That’s why I think there has to be these extremely strong, swift and severe economic sanctions, financial sanctions, looking at the energy sector.”

Earlier this week, Boris Johnson warned that tensions in the region have led to “the biggest security crisis Europe has faced for decades”.

But he cautioned Russia that invading Ukraine could lead to “an absolute disaster” that would be “pointless, tragic and vastly economically costly”.

Asked during a Nato summit in Brussels if Vladimir Putin wants to go to war, Boris Johnson said that it was “possible that something absolutely disastrous could happen very soon indeed”.

Turning the tide on second homes with taxes | Second homes