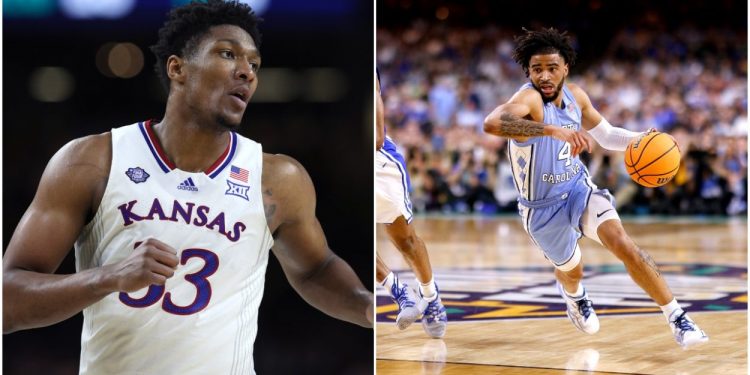 
The 2022 NCAA Men’s Basketball Tournament has reached an epic conclusion, with the Kansas Jayhawks and North Carolina Tar Heels set to square off in the national championship game on Monday night in New Orleans. Which players need to give their team an extra punch in the hopes of raising a banner?

Having gotten the better of the Blue Devils and ending Mike Krzyzewski’s career, the Tar Heels will try to complete their epic Cinderella run by defeating Kansas. However, the Jayhawks were the best team in arguably the best conference in college basketball and have played terrific basketball throughout March Madness.

This past weekend, we broke down X-Factors ahead of a historic iteration in the Duke-North Carolina. Now, ahead of Kansas-North Carolina for the NCAA men’s basketball national championship, it’s time to do the same.

McCormack keyed Kansas’ win over Villanova in the Final Four, and he’ll assuredly play a massive role in the Jayhawks’ chances of defeating North Carolina.

Tar Heels center Armando Bacot has been a mountain of a man in the paint throughout the NCAA Tournament, going for at least 21 rebounds in the last two games and telling eight offensive boards in each of the previous three contests. However, Bacot suffered an ankle injury late in the win over Duke. He’ll play in the national title game, but it’s unknown how the issue might impact his mobility.

Can McCormack take advantage of the situation?

As Villanova found out on Saturday, the 6-foot-10, 265-pound Jayhawks big man is a lot to handle. McCormack moved Wildcats center Eric Dixon around on the block and sealed him on entry passes early in the game. He immediately asserted his will. That trend continued throughout the contest.

McCormack scored a game-high 25 points on 10-of-12 shooting, also grabbing nine boards. He scored over both shoulders and never stopped being aggressive. The former Oak Hill product even faced up, scoring on jump-hooks and fallaways while allowing spacing to develop further, showing a willingness to make plays before reengaging in the post.

Kansas will undoubtedly hope Ochai Agbaji continues to shoot the ball well and provide scoring. Maybe a dormant Remy Martin can discover his early-tournament form. Still, all eyes should be on McCormack.

Getting the big man post touches and establishing him as a scorer forces defenses to consider sending help and opens up the floor for Agbaji, Christian Braun, and Jalen Wilson. He might even get Bacot into foul trouble and force North Carolina head coach Hubert Davis’ hand early.

Additionally, the Norfolk, VA native is capable of tangling with Bacot on the other end, allowing Kansas’ guards to avoid trapping in the post and focus on defending UNC’s speedy backcourt tandem of Caleb Love and RJ Davis. That’s imperative, because the Jayhawks cannot let those two get loose.

Love emerged as the star during UNC’s gripping win over Duke. But the Tar Heels do not win that game without Davis.

The diminutive guard almost single-handedly kept North Carolina in the contest during the first half. He scored 14 points on 5-of-7 shooting, including 2-of-3 from beyond the arc. His shot-creation proved vital, especially since his teammates shot a combined 7-of-27 from the field and 1-of-10 from deep during the first half.

Although Love carried the Tar Heels down the stretch, Davis still made plays off the bounce and forced the referees to make a decision when he drove on Duke guard Jeremy Roach with just over a minute remaining and the Blue Devils up one. He got the whistle on Roach and made both free throws, giving UNC a critical leg up.

Davis’ speed, playmaking, and microwave-like scoring are all incredibly vital for North Carolina against a Kansas team that is as well-balanced as any in the country. He’ll also have his hands full against one of the better defensive players in the Big 12.

Jayhawks guard Dajuan Harris isn’t much of a shot-creator, but he’s a decent playmaker and terrific on-ball defender. The Big 12 All-Defensive member figures to make life difficult on Davis, who must find a way to help Love and Brady Manek with the scoring load, particularly with Bacot playing at less than 100%.

It’d make sense to label Bacot as an X-Factor, given the uncertainty surrounding his injury. Meanwhile, Love’s three-level scoring makes him a key to UNC’s success.

Still, Davis’ ability to be a sparkplug and a guy who can score or make plays for teammates off the dribble is necessary for a Tar Heels squad that will need to score to keep pace with the Jayhawks. He’s also a surprisingly strong rebounder for his size, which is essential against a Kansas team with a reasonably noticeable size advantage.

Other things to watch

Aside from keeping tabs on McCormack and Davis, take stock of the following ahead of the NCAA men’s basketball national championship between Kansas and North Carolina:

Kansas and North Carolina: Two blue-blood programs playing for the NCAA men’s basketball national championship. It should be a doozy.

Walmart truck drivers can now make up to $110,000 a year — that’s double what many truckers are making. Here’s what’s going on.

Walmart truck drivers can now make up to $110,000 a year — that's double what many truckers are making. Here's what's going on.