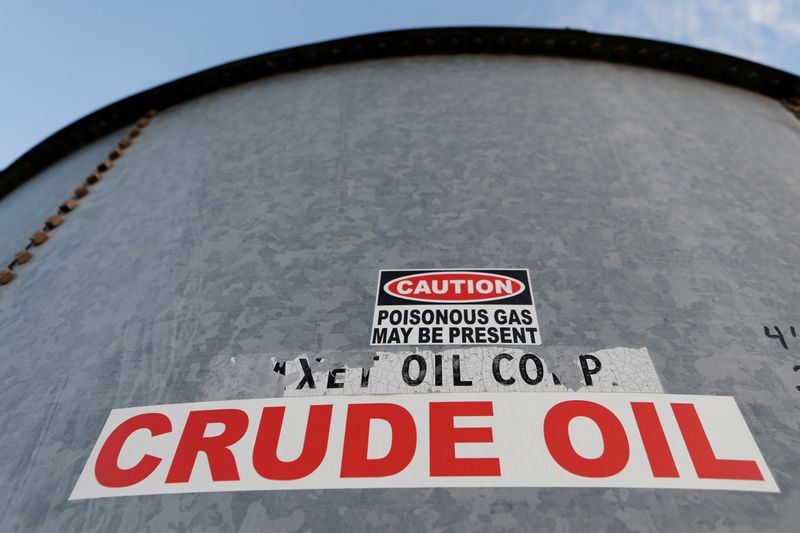 © Reuters. FILE PHOTO: A sticker reads crude oil on the side of a storage tank in the Permian Basin

SINGAPORE (Reuters) – prices eased on Friday but hovered near $70 a barrel as production cuts by major oil producers constrained supply, with optimism about a recovery in demand for the resource in the second half of the year also lending support.

Front-month Brent is on track to post weekly gains for the eighth week after touching a 13-month high on Monday following attacks on Saudi Arabian oil facilities.

Sentiment was also buoyed by the decision of the Organization of Petroleum Exporting Countries (OPEC) and its allies, a group known as OPEC+, earlier this month to largely hold production cuts in April.

Investors have been pumping funds into commodities such as oil on expectations of a demand recovery in the second half of the year as the global economy grows while a wider rollout of vaccines against the COVID-19 pandemic allows more people to travel this summer.

“Assuming vaccination programmes are successful, we expect pent-up demand for gasoline to be released this summer during the U.S. and European driving season,” FGE analysts said in a note.

RBC Capital analysts said the fundamentals for summer gasoline is the most bullish in nearly a decade.

“We think this will support the entire oil complex this summer and beyond.”

OPEC said on Thursday a recovery in oil demand will be focused on the second half of the year.

Scientists want to send 6.7 million sperm samples to the moon

Scientists want to send 6.7 million sperm samples to the moon